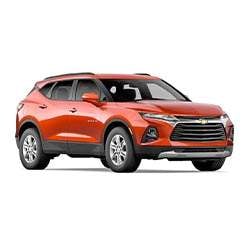 Price Tip:
To find the best possible price on a new Chevrolet Blazer, shop prices online first. Get up front pricing before you walk into a dealership. We recommend the following free services; Car Clearance Deals,   Edmunds,   NADAguides,   Motortrend  &   CarsDirect
These services will offer you the lowest prices and supply you with multiple competing price quotes. You will know the best price before you visit the dealer.

How to Calculate The Dealer Cost of a Chevrolet Blazer

The Chevy Blazer has a striking design, with strong angles and a muscular frame. Along with having excellent style, it has a good amount of interior space and some solid engines to choose from. Tech-lovers will appreciate its infotainment system, and its safety package is pretty respectable as well.

Chevrolet makes several trims of the Blazer, starting with the 2LT. The 3LT has a few key upgrades, and both this trim and the 2LT can be enhanced with the Redline, Sport, or Midnight Edition appearance packages. The RS and Premium take things further with leather seats and mores stylistic elements.

Changes for the 2022 Model Year

A few trims have been taken away from the offerings in 2022. The L and 1LT trims are no longer available, and with them, the 193-horsepower, 2.5-liter engine option has been removed. The other changes are relatively minor. Several trims are now available with a two-tone roof, and there are two additional paint choices, which are Nitro Yellow and Blue Glow.

Since the 2.5-liter engine was removed from the lineup, a turbocharged 2.0-liter engine has become the first option. It delivers 228 horsepower and 258 pound-feet of torque, and it makes the Blazer feel pretty lively. This turbo engine is standard on the 2LT, 3LT, and Premier trims.

The other choice is a 3.6-liter V6. Though it's not as efficient as the turbo engine is, it's considerably more powerful. It comes with 308 horsepower and 270 pound-feet of torque, and it increases towing capacity from 3,500 pounds to 4,500 pounds.

Chevy has paired both engines with nine-speed automatic transmissions. There is a manual shift override in case anyone wants to have more control over this aspect of driving.

With either engine, there's the opportunity to get all-wheel drive. Having power sent to all four wheels can result in a big advantage when conditions are slippery. The available all-wheel-drive system on the RS is more advanced in that it can deliver torque to each rear wheel independently.

The models that have a black contrast roof look particularly edgy. LED Daytime Running Lamps and LED taillights are standard, and LED headlamps are available. The wheels can measure 18, 20, or 21 inches and come in various designs.

Several convenient features can be integrated into the Blazer. It comes standard with heated power outside mirrors to prevent frost build-up, and those mirrors can have an auto-dimming function as well as integrated turn signals. Plus, the liftgate can be power operated and have a hands-free opening mechanism.

One of the reasons why the Blazer does well in the market is because it has a spacious cabin. Second-row leg room is nearly 40 inches, and maximum cargo capacity is more than 64 cubic feet.

Every one of the Blazer trims is equipped with an eight-inch touchscreen. This touchscreen comes with Bluetooth, SiriusXM, Apple CarPlay, and Android Auto, all of which are highly sought after these days. They go a long way in helping people stay entertained and keep in touch with others while driving. On higher trims, the touchscreen is enhanced with integrated navigation, which is so nice to have when traveling or figuring out how to avoid traffic congestion.

All models also have dual-zone automatic climate control, power-adjustable driver's seats, and active noise cancellation. For an SUV with such a rugged look, the Blazer has a surprising number of high-end features that are even incorporated into its base trim.

The 2LT has premium cloth seats, and all of the others have perforated leather upholstery. The fact that the second trim in the lineup has such luxurious seating material is noteworthy. Remote start and heated and ventilated front seats are some available options.

Chevrolet has given the Blazer a set of driver-assist technologies. All of the trims in the lineup have forward collision alert, a following distance indicator, pedestrian detection, and automatic emergency braking. These programs all work together and can be quite useful. Lane keep assist with lane departure warning is another standard element, and it can be used to keep the Blazer centered in a lane.

The higher trims have a few more systems, including rear cross traffic alert and blind zone monitoring. Like the standard rearview camera, these features provide an extra pair of eyes. A 360-degree camera is available as well.

The Blazer is sporty and feels very durable, while also having a nicely equipped and spacious cabin. It's somewhat pricey, but it does come with its own flair.

Note: All Chevrolet Blazer MSRP, invoice and dealer cost dollar figures above are subject to change without notice.