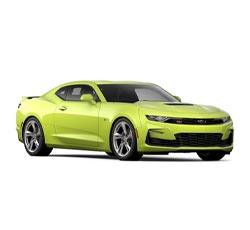 The 2021 Chevrolet Camaro is arguably the king of today’s muscle car segment. Precise handling and powerful engine options enable the Camaro to offer a lot of driving fun. Even the base model comes loaded with attractive features, which make this car an even better value. Let’s take a closer look at the new Camaro has to offer.

This year, Chevy has updated all trims with wireless Apple CarPlay and Android Auto. This means drivers can link their smartphone without the use of a cord. Previously only offered with a manual transmission, the Camaro’s track-ready 1LE performance package is now offered on automatic-equipped models.

Chevy offers the new Camaro in two-door coupe and convertible body styles. Rear-wheel drive is standard throughout the lineup. A small backseat enables up to four people to travel together.

What Are the Available Trims?

Stepping up to 1LT trim brings a few more upgrades. On the inside, drivers will enjoy steering-wheel audio controls and satellite radio, Meanwhile, upgraded 18-inch alloy wheels give the car’s exterior a bit more style.

Drivers seeking more luxury should go for the Camaro 2LT. It receives more creature comforts, including heated/ventilated front seats and dual-zone automatic climate control. Another notch of the trim ladder is the Camaro 3LT, which comes equipped with a Bose premium sound system and a color head-up display.

Unlike the lower trims, the Camaro LT1 comes equipped with a more powerful V8 engine. It also receives a performance-tuned suspension for tighter handling. A larger set of 20-inch wheels and a vented hood give the car a meaner look on the outside. While the Camaro 1SS is similarly equipped, Chevy adds Brembo performance brakes and a rear spoiler. Upgrades, like ventilated seats and a Bose sound system, are featured on the more luxurious Camaro 3SS.

The most potent model in the lineup is the supercharged Camaro ZL1. Aside from packing more muscle under the hood, this high-performance trim also features Recaro sport seats and adaptive suspension dampers.

Many people rank the Camaro’s aggressive exterior styling as one of their favorite features. It looks like a far more modern version of the 1969 model. Everyone on the street will notice the Camaro’s menacing front fascia and sweptback roof. Thin LED headlights also help give this car a cool look.

The Camaro has four engines in its lineup. Drivers who prioritize fuel economy will like the base turbo four-cylinder engine. Meanwhile, performance elevates slightly with the Camaro’s available V6 engine. Folks who desire the action of a traditional muscle car will want the available V8 engine, which pushes out 455 horsepower. A supercharged version of this engine is found on the 650-horsepower ZL1 model.

All versions of the new 2021 Chevrolet Camaro are quick and athletic. However, Chevy’s available 1LE package is a must for drivers who plan to spend some time on the track. It adds stiffer suspension dampers and upgraded performance tires. Ride comfort also isn’t bad for sports car.

When equipped with a four-cylinder engine and automatic transmission, the 2021 Chevrolet Camaro can return an EPA-calibrated 22 mpg town/31 mpg freeway. Fuel economy naturally drops with the car’s more powerful engines. However, expect the V8-powered SS model to still return around 27 mpg at normal highway speeds.

Some drivers will have to get used to the Camaro’s low seating position.
Fortunately, there’s more legroom in the Camaro than most people think. While front-seat passengers can kick back, most people sitting in the rear will feel squished. As usual, the car’s tiny windows often hinder outward visibility.

The federal government’s crash-testing agency gives the Camaro a five-star rating in overall impact protection. While a backup camera comes standard, Chevy’s blind-spot monitor system is a highly recommended option. Teen Driver technology is found at every trim level, which helps give parents more control over their teenagers.

The 2021 Chevrolet Camaro is today’s most nimble America muscle car. It also packs enough performance to take on some expensive foreign sports cars. This is especially true for the super-fast ZL1 model. Now is a great time to go take a test drive.

How to Calculate The Dealer Cost of a Chevrolet Camaro

Note: All Chevrolet Camaro MSRP, invoice and dealer cost dollar figures above are approximate amounts. Prices are subject to change without notice.