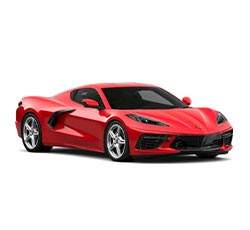 Chevrolet Corvette Pricing for the 1LT, 2LT and 3LT Trims

Price Tip:
To find the best possible price on a new Chevrolet Corvette Stingray, shop prices online first. Get up front pricing before you walk into a dealership. We recommend the following free services; Car Clearance Deals,   Edmunds,   NADAguides,   Motortrend  &   CarsDirect
These services will offer you the lowest prices and supply you with multiple competing price quotes. You will know the best price before you visit the dealer.

How to Calculate The Dealer Cost of a Chevrolet Corvette Stingray

The 2022 Chevrolet Corvette can compete with a number of high-dollar supercars, including the Porsche 911. Drivers love the new Corvette’s mid-engine design, which has helped take handling to another level. While this car is athletic enough to compete on the track, comfortable seats and a surprisingly good ride make it daily-drivable. When taking a weekend road trip, owners can take advantage of the Corvette’s 12.6 cubic feet of cargo space.

The 2022 Chevrolet Corvette is a two-seat sports car, which is offered in both coupe and convertible body styles. Every trim features a rear-wheel-drive layout.

What Are the Available Trim Levels?

There are three Corvette trim levels. The entry-level 1LT trim allows drivers to have fun for the lowest price. Power-adjustable seats and an adjustable steering wheel help you to obtain a great driving position. Dual-zone automatic temperature control is another amenity. Standard tech includes an 8.0-inch touchscreen with Wi-Fi hotspot capability, a customizable digital gauge cluster, and wireless smartphone integration. Music fans are rewarded with a 10-speaker Bose audio system.

The current-generation Corvette looks far more exotic than its predecessors. However, it still has a distinctive appearance. This car’s sculpted body and wide stance make a serious statement. Even the coupe features removable roof panels. However, some drivers will simply enjoy the convenience of the convertible’s power-retractable roof. Several vibrant paint finishes are available, including Amplify Orange and Accelerate Yellow Metallic.

There are a few appearance packages available for drivers who desire a more personalized look. The Stingray R Appearance Package brings a black hood stripe and special logos. LED lighting for the engine bay and carbon-fiber trim come with the Engine Appearance Package. New for 2022 is the optional low-profile rear spoiler.

The 2022 Chevrolet Corvette is just as exciting as any sports car on today's market. All trims come equipped with a racy, naturally aspirated V8 engine. It cranks out an engaging 490 horsepower. Although the Corvette can no longer be had with a traditional manual transmission, drivers will enjoy the eight-speed automatic transmission’s rapid shifts. With a tested 0-60 mph time of around 3.0 seconds, this American sports car definitely competes on an elite level.

Not only does the optional performance exhaust system tack on an additional five horsepower, but it also excites drivers with a muscular sound. Phenomenal handling further aids the Corvette’s ability to keep pace with the competition. A mid-engine design makes it feel more balanced than previous generations. Luckily, the Corvette is still comfortable enough for everyday street driving.

The Corvette offers competitive fuel economy for a powerful sports car. According to the federal government, it should return an estimated 16 mpg in town and 24 mpg on the freeway. Keep in mind that drivers will need to fuel the Corvette using premium gasoline.

Automotive reviewers applaud the Corvette for its futuristic cockpit. Its fighter jet-inspired controls are angled towards the driver. The car’s interior quality is just as impressive. Tight-fitting panels help make squeaks and rattles nonexistent.

While the Corvette is a two-seater, it manages to give passengers enough space to unwind. The nicely contoured seats also promote a comfy drive. While the car’s sleek design can hinder rear visibility, buyers can opt for a blind-spot monitor.

The Corvette is a world-class driving machine. When compared to some competitors, it proves to be a splendid value. You certainly won’t regret taking the new model for a test drive.

Note: All Chevrolet Corvette Stingray MSRP, invoice and dealer cost dollar figures above are subject to change without notice.