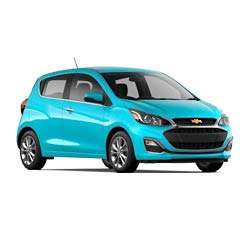 Price Tip:
To find the best possible price on a new Chevrolet Spark, shop prices online first. Get up front pricing before you walk into a dealership. We recommend the following free services; Car Clearance Deals,   Edmunds,   NADAguides,   Motortrend  &   CarsDirect
These services will offer you the lowest prices and supply you with multiple competing price quotes. You will know the best price before you visit the dealer.

How to Calculate The Dealer Cost of a Chevrolet Spark

The 2022 Chevrolet Spark is one of the smallest vehicles in today's market. As such, it might not be appealing to everyone, but it does fit within a certain niche. It will be hard for potential buyers to ignore its extremely low starting price. This is the Chevy Spark's main advantage of other models.

It runs on a four-cylinder engine and comes standard with a manual transmission, and as one would imagine, it's quite efficient. It has a relatively basic cabin, though it gets to have a touchscreen and smartphone compatibility.

This car runs on a 1.4-liter EcoTec engine. Horsepower is only 98, which is almost unheard of these days. Torque isn't much better at 94 pound-feet. Obviously, the Spark isn't going to win any races nor is it going to be able to haul any cargo.

Chevy gives customers the option of getting a manual or automatic transmission. The standard setup across the lineup is to have a five-speed manual transmission. If someone prefers automatic, the other option is to get a continuous variable transmission. Electric traction control is standard, and so is hill start assist, which is a nice bonus feature.

To say that the Chevrolet Spark is a compact car isn't exactly accurate. It's actually a subcompact vehicle, with the emphasis on the "sub" part. It's significantly smaller than traditional four-door sedans. It has seating for up to four passengers, with there being 33 inches of leg room in the second row.

When the rear seatback is in its upright position, there's only 11.1 cubic feet of cargo space. It can be a bit hard to pack this area full, since it's not very deep. Lowering the rear seats can more than double cargo capacity to 27.2 cubic feet, so it's likely that drivers will be happy to take advantage of this. Since the rear bench is split, one side can be lowered in case someone has to sit in the back seat along with some cargo.

Every 2022 Spark comes with a seven-inch touchscreen. People will appreciate that this screen is equipped with Bluetooth, Apple CarPlay, and Android Auto. Every model is also capable of acting as a Wi-Fi hotspot. Two USB ports are included in the center console, and every Spark is compatible with OnStar and Chevrolet Connected Services.

For the 2022 model year, Chevrolet continues to make four trims of the Spark. The LS rides on 15-inch steel wheels and has a four-speaker sound system. It has a few small storage compartments that can be used to stay organized. It may be hard to believe, but this entry-level trim has some features that some people haven't seen in decades, which are manually operated windows and manually adjustable side mirrors.

The 1LT is upgraded, thankfully, with power-operated windows and side mirrors. Its side mirrors even have heating elements built into them. Rather than having steel wheels, the 1LT sits on aluminum ones. It's enhanced with LED daytime running lights, a six-speaker sound system, and cruise control. This trim also offers remote keyless entry, which is much more convenient than requiring someone to physically put a key in the door to unlock it. In terms of technology, the 1LT has the advantage over the LS because of its standard SiriusXM Satellite Radio.

On the 2LT, there are even more advantages, including a distance alert that can help prevent drivers from hitting objects behind them. This trim looks a bit nicer with its chrome door handles and exterior accents. Notably, the 2LT has leatherette upholstery instead of cloth. Not only does this material feel more refined, but it's also easier to keep clean. Finally, the 2LT benefits from a keyless entry system. It can sense when the key fob is in close proximity, and if it is, someone just has to touch the sensor on the door handle in order to unlock it.

The last option is the Activ. It's usually listed after the 2LT in the lineup, though it's slightly cheaper and doesn't have all of the higher-end features. For instance, it doesn't have rear park assist, nor does it have chrome accents or keyless entry. It does have leatherette seats like the 2LT does.

What makes the Activ unique is its enhanced suspension. It offers a smooth ride, which can make a difference in overall comfort. The Activ has special gunmetal silver-painted wheels along with black bumpers and black rocker moldings. Its the only trim to have fog lamps and a luggage rack, too.

The 2022 Chevy Spark is likely going to be the last of its kind. Now might be the time to get one if someone doesn't want to spend that much money on his/her next vehicle. It's recommended to get one of the higher trims to optimize convenience.

Note: All Chevrolet Spark MSRP, invoice and dealer cost dollar figures above are subject to change without notice.