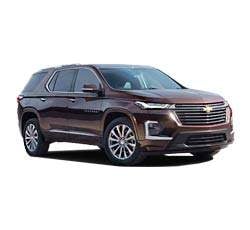 Price Tip:
To find the best possible price on a new Chevrolet Traverse, shop prices online first. Get up front pricing before you walk into a dealership. We recommend the following free services; Car Clearance Deals,   Edmunds,   NADAguides,   Motortrend  &   CarsDirect
These services will offer you the lowest prices and supply you with multiple competing price quotes. You will know the best price before you visit the dealer.

How to Calculate The Dealer Cost of a Chevrolet Traverse

Chevrolet makes some well-known three-row SUVs, and the Traverse is perhaps the lesser known of the group. It's not as large as its big brothers, the Tahoe and Suburban, but this is something that could work in its favor. It's able to offer seating for up to eight people along with plenty of cargo room, and it still feels nimble and quick on its feet. It's also powerful while not having to guzzle too much gas.

This SUV comes in several trims, with the lower ones being much more budget friendly. The higher trims are quite sophisticated but have the price tags to match.

This year, the Traverse has been given a bit of a makeover. It has some different exterior details that make its front-end look similar to that of a truck. Some customers are going to prefer this more rugged appearance. Chevy has given the Traverse new wheel designs and narrower headlamps, too.

There's now more technology for drivers to take advantage of. The available digital display has gotten larger, and the safety package has gotten enhanced. Driver-assist systems were previously available on the Chevy SUV, but it makes a big difference that they've become standard.

The Traverse runs on V6 engine that has a displacement of 3.6 liters. It's able to make 310 horsepower and 266 pound-feet of torque. These numbers should please a lot of buyers who want their new SUVs to be strong and powerful. Towing capacity is 5,000 pounds, and the engine works in conjunction with a nine-speed automatic transmission.

Many people find the Traverse to be easy to maneuver. It's quick to accelerate and doesn't seem to have any trouble with climbing hills, even when packed down with a lot of cargo.

It's available with all-wheel drive to give it better traction. With the Driver Mode Selector knob on the center console, it's easy to make adjustments to how the vehicle performs. FWD mode results in more fuel-efficient driving, 4WD mode can be used when it's harder to grip the road, and there could also be Off-Road, Snow, and Tow/Haul modes.

It's important to discuss the dimensions of three-row SUVs so that potential buyers can better understand how spacious a model actually is. The Traverse provides more than 38 inches of second-row leg room and nearly 34 inches of third-row leg room. It might be a tight squeeze for some adults in the back row, but in a pinch, they would definitely be able to fit there. This is different than some other models that really don't have adequate space in their third rows.

Behind the seats, there's a sizable cargo area. It has a volume of 23 cubic feet. When the third row is folded down, cargo capacity expands to 57.8 cubic feet, and when both rear rows are lowered, capacity increases to 98.2 cubic feet. This is more than enough for most situations.

Six trims are available, starting with the LT. What's great about the LT is that it comes standard with driver-assist technologies, including forward collision alert, lane keep assist, and pedestrian detection. Its infotainment system consists of Apple CarPly, Android Auto, Bluetooth, SiriusXM, and a seven-inch touchscreen. This trim can keep passengers comfortable with a tri-zone automatic climate system.

The LT Cloth is notable because it can be configured to have either eight or seven total seats. An eight-seat configuration would require a bench seat in the middle row, and a seven-seat setup would mean that the SUV has two captain's chairs. The LT Cloth is upgraded with blind-zone and rear cross-traffic monitoring, and it has a power-adjustable driver's seat.

As its name suggests, the LT Leather has leather upholstery. It has a more advanced driver information center behind the steering wheel, and it benefits from a power rear liftgate that can prove to be so handy.

The RS looks more aggressive than the others with black exterior accents, including a black grille, black roof rails, and black Chevy bowtie emblems. Even its wheels are black. Since they measure 20 inches, they stand out. It's not just style that the RS has; it has more technology, too. It features adaptive cruise control and a 360-degree camera system, in addition to a Bose premium sound system that pumps up the bass with a subwoofer. Its rearview mirror doubles as a screen through which a driver can see a live video feed from the rearview camera.

Next up is the Premier. Its high-end amenities include a memory system for the driver's seat and power-adjustable steering column as well as integrated navigation and an eight-inch HD color touchscreen. Its liftgate can be opened by just kicking one's foot underneath the sensor, and the liftgate can project the Chevy emblem as a kind of welcoming greeting.

Finally, there's the High County. It's the only one to come standard with a beautiful two-panel moonroof and a power-folding third row.

The Chevy Traverse could be perfect for someone who values performance and wants something that's spacious, high-tech, and reliable. The lower trims, in particular, have relatively low prices in comparison with competitors.

Note: All Chevrolet Traverse MSRP, invoice and dealer cost dollar figures above are subject to change without notice.