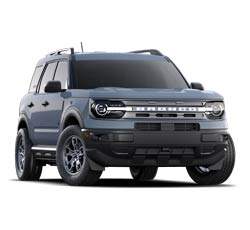 Price Tip:
To find the best possible price on a new Ford Bronco Sport, shop prices online first. Get up front pricing before you walk into a dealership. We recommend the following free services; Car Clearance Deals,   Edmunds,   NADAguides,   Motortrend  &   CarsDirect
These services will offer you the lowest prices and supply you with multiple competing price quotes. You will know the best price before you visit the dealer.

How to Calculate The Dealer Cost of a Ford Bronco Sport

The Bronco Sport is an SUV that's been built with fun and adventure in mind. It feels sporty and athletic, and it has a lot of unique features that make it an intriguing choice for anyone in need of a capable two-row SUV. This model made its debut in 2021, so this year, Ford hasn't made any significant changes.

Either way, the Bronco Sport uses an eight-speed automatic transmission. If the larger engine is installed, there would be paddle shifters mounted on the steering wheel to give drivers a bit more control.

All Bronco Sports come with a 4x4 drivetrain. Plus, they have terrain management systems with either various drive modes. The turbo 2.0-liter engine also comes with a twin-clutch rear drive unit. This allows rear-axle torque to be sent to a single rear wheel if the other one is having some trouble gripping the road or trail.

To better deal with rugged terrain, the Bronco Sport has a HOSS system. HOSS stands for High-Performance, Off-Road, Stability, Suspension. It gives the SUV specially tuned front struts, softer springs, and anti-roll bars so that it can tackle obstacles and uneven trails.

This SUV doesn't have the best fuel efficiency, but many potential buyers will find its mileage to be more than acceptable. With the smaller engine, it can earn 25 miles per gallon in the city and 28 miles per gallon on the highway. Those numbers drop to 21 and 26 for city and highway driving, respectively, when the Bronco Sport uses the larger engine.

The Bronco Sport has several components that help it stand out in a crowded SUV market. First, it has a flip-up rear glass that provides an additional way to access the cargo area. This rear glass can come in handy, too, when longer items need to be carried and might not otherwise fit in the back. Cargo tie-down hooks and loops can be utilized to keep items secure.

Its safari-style roof gives the cabin extra height, which can be useful when bulky items are being transported. Two bikes, standing up with their front wheels removed, can even fit in the back side-by-side. The steel roof is quite strong, capable of holding up to 150 pounds of weight when the SUV is moving, and it can hold even more weight when the vehicle is stationary. Also, the liftgate has two floodlights built into it, and there's a bottle opener integrated into the hatch.

In terms of technology, the Bronco Sport is pretty well equipped. It has an eight-inch touchscreen with SYNC 3 software and voice recognition. Apple CarPlay, Android Auto, Bluetooth, and FordPass Connect, which allows the SUV to act as a Wi-Fi hotspot, are all part of the basic package as well.

In addition, the Bronco Sport has a lot of advanced safety mechanisms. It has pre-collision warning with emergency braking to make frontal collisions less likely to occur. To prevent drivers from accidentally veering out of position, it has lane-keeping assist. Blind-spot monitoring and rear cross-traffic alert can play a big role in helping drivers stay aware of other vehicles.

There are four available trims, starting with the Base. The Base has all of the features just described, so it should be appealing to many customers. It has cloth upholstery and remote keyless entry, and it's limited to having manually adjustable front seats and a manual liftgate.

The Big Bend is the next one in the lineup. On its exterior, it's upgraded with heated side mirrors, and it can be enhanced even more with crossbars for the roof rack and LED fog lights. It has some more convenient features in its cabin, including automatic temperature control, a rubberized cargo floor mat that's easy to clean, and MOLLE straps that are so great for keeping smaller accessories in place. At this level, SiriusXM becomes standard, and there are more available options like getting heated front seats and navigation.

With the Outer Banks trim, which looks striking with its black contrast roof and signature LED lighting, Ford is able to attract those with more refined tastes. This trim has heated and power-adjustable front seats and a heated steering wheel, as well as leather upholstery. Ambient lighting, push-button start, and an auto-dimming rearview mirror can also be appreciated. On top of having the rubberized cargo mat, this trim has rubberized seat backs that can be quickly washed off at any time.

The Badlands is the highest trim, and it's exclusively offered with the 2.0-liter turbo engine and the other higher-quality mechanical components that are associated with the larger engine. The Badlands gets upgraded with metal bash plates and front tow hooks. It has many of the same features found in the Outer Banks, though it doesn't have a heated steering wheel or leather seats.

This relatively new addition to Ford's lineup is gaining a lot of fans. The Ford Bronco Sport has a rugged style, solid capability, and the advanced systems that many people are looking for.

Note: All Ford Bronco Sport MSRP, invoice and dealer cost dollar figures above are subject to change without notice.