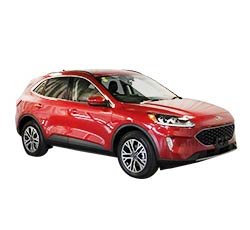 The Ford Escape is a sleek crossover that has been redesigned for 2020. It comes with two rows of seating, and many people will enjoy the versatile features in the back. 37.5 cubic feet of cargo space is found behind the second row, which can be folded down to accommodate larger items.

This model year comes with a lot of additions and changes. First of all, the body has been tweaked a bit. Now, the crossover is positioned a little more like a sedan and less like an SUV that it previously was. Rather than sitting up straight and tall, it's now a bit longer and wider. These changes have actually increased the overall cabin by a few cubic feet.

The 2020 Ford Escape is poised to come with a plug-in hybrid variant that will appeal to the growing number of eco-conscious buyers in the market. This will be in addition to the Escape hybrids that use a traditional hybrid engine. On the standard models, Ford has moved to using a turbo-charged 1.5-liter three-cylinder engine.

Many Trims to Consider

There are six trim levels on the 2020 Ford Escape. The S and SE are the basic versions, with the SE coming with a Sport Hybrid model. The SEL is a mid-range option that has a nice collection of convenience and technology features. The Titanium and Titanium Hybrid sit at the top end of the spectrum. They come with many premium features, but they also have significantly higher price tags.

All-wheel drive is available on any trim, and it would make sense to get this feature if winter conditions are a little slippery in one's region. Since the Escape comes with the All-Wheel Drive Disconnect function, the AWD configuration can be disabled whenever a driver wants to save energy. If AWD is not selected, the vehicle is run through a front-wheel drive system.

The 2020 Ford Escape can be powered by one of four engines. The lower three models use a 1.5-liter EcoBoost engine and an eight-speed automatic transmission. This engine comes with 180 horsepower and 177 pound-feet of torque, and it can tow a maximum of 2,000 pounds.

A 2.0-liter EcoBoost engine is available on the SEL and standard on the Titanium. It has significantly more capability, with 250 horsepower and 275 pound-feet of torque. Consequently, its towing capacity rises to 3,500 pounds, so this may be important to those who frequently haul cargo.

The other two options are a hybrid 2.5-liter iVCT engine and its plug-in counterpart. Both of these are Atkinson-cycle engines. The traditional hybrid model uses a gas-powered engine and an electric motor, whereas the plug-in model gets its energy from an electric outlet. With a 110-volt charger, it takes about 10 hours to fully charge a battery. If a 240-volt charger is used, it only takes approximately 3.5 hours to get a full charge.

What's nice about the Ford Escape is that it each of its trims come with Ford Co-Pilot 360. This consists of a handful of safety features that can warn drivers about potential issues and take corrective action, when appropriate. The Escape can monitor its own blind spots, hit the brakes to lessen the likelihood of a collision, and maintain its position in the center of a lane, among other things. Other advanced abilities, like being able to park itself and help you steer to avoid other vehicles, are available options on the higher trims.

A basic 4.2-inch display is found on the S, but all the other trims have a SYNC 3 infotainment system, an eight-inch touchscreen, and Apple CarPlay and Android Auto compatibility. The Titanium comes with the best features, to include a Bang & Olufsen 10-speaker system, built-in navigation for convenience, and a digital gauge display behind the steering wheel that measures over 12 inches.

In terms of cabin features, there's a range of materials used. Things are comfortable, though not fancy, in the S trim, which has cloth seats and the basics like cup holders and inside lighting. The SE is where one starts to see a power-operated driver's seat and heated front seats, along with an electronic climate control system.

The SEL's seats are made with ActiveX, which is a durable synthetic material and is considered an upgrade over cloth, and its leather-wrapped steering wheel is heated. With the Titanium, everyone can appreciate the soft leather-trimmed seats. The Titanium also has a universal garage door opener, and both the SEL and Titanium trims have a remote start system.

LED signature lighting is used on all models of the 2020 Ford Escape. Most of the trims have heated side mirrors and roof racks, and the higher trims will come with fog lamps and hands-free liftgates. It can be very convenient to simply kick a foot out under the bumper's sensor when one needs to have access to the cargo area.

The new 2020 Ford Escape looks sporty and agile, and it mostly drives that way, too. It's a good option for those who are interested in compact crossovers. Making the Escape more attractive is its number of trims. Budget-minded consumers will likely be looking at the S or SE, and those who have a little more money to spend will have to strongly consider getting the Titanium for all of its extra features.

How to Calculate The Dealer Cost of a Ford Escape

Note: All Ford Escape MSRP, invoice and dealer cost dollar figures above are approximate amounts. Prices are subject to change without notice.