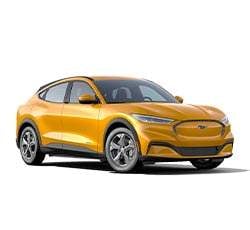 Price Tip:
To find the best possible price on a new Ford Mustang, shop prices online first. Get up front pricing before you walk into a dealership. We recommend the following free services; Car Clearance Deals,   Edmunds,   NADAguides,   Motortrend  &   CarsDirect
These services will offer you the lowest prices and supply you with multiple competing price quotes. You will know the best price before you visit the dealer.

How to Calculate The Dealer Cost of a Ford Mustang

In its sophomore year, the Mustang Mach-E continues to shine. It's elegant and capable, and it comes with a lot of advanced technology. Whether it's considered a crossover or an SUV doesn't really matter, as it has a comfortable and well-equipped cabin with a good amount of cargo room. The most noteworthy thing about the Mustang Mach-E is what's under its hood, or rather, what's not under there. It's an all-electric vehicle that has excellent range and great capability.

For this year, Ford has made tweaks to specific trims. For instance, the mid-level California 1 trim is now available with all-wheel drive, and it's been equipped with heating elements in its front-row seats and steering wheel. The GT trim comes with a black roof that presents an interesting contrast. Plus, the Premium trim can be set up with an Ice White Edition package so that it stands out with white details and Star White metallic paint.

There are four trims, and each of them offers a slightly different package. While they have differences in relation to exterior and interior features, a major way in they are distinct from each other has to do with their performance.

The first trim is the Select. It's capable of generating 266 horsepower and 428 pound-feet of torque. Its range is estimated to be 247 miles.

Both the Premium and California Route 1 use the same type of electric system, which is a little more powerful than that of the Select. It gives them the ability to hit a speed of 60 miles per hour in just 4.8 seconds. In contrast, the Select can achieve that speed in 5.2 seconds. With the Premium and California Route 1, there can be an extended-range battery. It supplies 346 horsepower and 428 pound-feet of torque, and its estimated range is 303 miles.

Finally, there's the GT. It's been enhanced so that it can make 480 horsepower and 600 pound-feet of torque. These numbers aren't comparable with many other models, so they really set the GT apart from the competition. The GT can beat lots of other vehicles off the line, as it can go from zero to 60 in only 3.5 seconds. This trim has a range of 270 miles.

Some customers might be hesitant to get an electric vehicle because they're not sure how charging works and how convenient it might be. While having an electric vehicle does require a little bit of planning ahead to ensure there's enough range, it can be simple to keep track of everything.

The Mustang Mach-E can show drivers how much range they have left, and it can help them find public charging stations. Ford's electric vehicles can be charged at any station on the BlueOval Charge Network, which is nationwide. In some cases, an extra 60 miles of range can be provided after only ten minutes of charging time. It might only take 45 minutes to go from a 10% to an 80% charge using one of the fast public charging stations.

Instead, the 240-volt system is recommended. Dealerships can help customers get this type of equipment installed at their residences. With a 240-volt system, each hour of charging results in an increased range of 28 miles. It takes about 11 hours to go from a 0% to a 100% charge. 11 hours might seem like a lot, but it's actually not when taking into account the fact that this can happen overnight or on the weekend when people are hanging out at home.

There are unique design features that this Ford has. First, there's a hidden surprise up front. There's a small trunk under the hood that has just under five cubic feet of storage space. Since it has a drain, it can double as a cooler.

The cabin can feel much more opened up if it gets to have a panoramic roof. This roof lets in so much natural light, but it has a special coating that keeps the cabin from getting too warm on sunny days.

Another distinct component is the e-latch. When a driver walks up to the Ford with the key fob in close proximity, the vehicle will sense his/her presence and a button will light up on the door frame. All it takes is one touch of that button to open up the door. Likewise, the vehicle can automatically lock its doors when the driver walks away, again with the key fob in a hand or pocket.

Ford has given the Mustang Mach-E many pieces of advanced technology. It features a huge 15.5-inch touchscreen that has SYNC 4A software. It comes with voice recognition, smartphone compatibility, and built-in navigation. The infotainment system also comes with Ford + Alexa.

People can use their smartphones to connect with their vehicles even when they're not in them. The FordPass App can be used to set driving destinations, check on range, and lock or unlock the doors.

Note: All Ford Mustang MSRP, invoice and dealer cost dollar figures above are subject to change without notice.