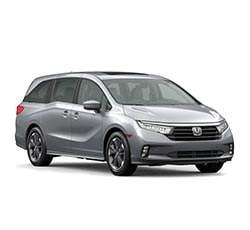 Price Tip:
To find the best possible price on a new Honda Odyssey, shop prices online first. Get up front pricing before you walk into a dealership. We recommend the following free services; Car Clearance Deals,   Edmunds,   NADAguides,   Motortrend  &   CarsDirect
These services will offer you the lowest prices and supply you with multiple competing price quotes. You will know the best price before you visit the dealer.

How to Calculate The Dealer Cost of a Honda Odyssey

The 2022 Honda Odyssey has long been a favorite amongst customers who value what minivans have to offer. Even if it's not the most exciting vehicle, the Odyssey has a lot going for it. It has all the room that many people need, along with a strong engine, comfortable seating, and advanced technology.

The biggest selling point of the Odyssey is probably its cabin space. This minivan can have seven or eight total seats. To have the seven-seat configuration, it would only have two seats in its middle row. Most trims have eight-seat configurations, though, so they have three seats in their second row.

Honda has something called a Magic Seat. Magic Seats can be quickly rearranged to provide more cargo space. Every trim has Magic Seats in their back rows. They have 60/40 split configurations, allowing some flexibility. On the back of the seats, there's a strap that can be pulled down to fold the seats backwards. They move into their compartments with one swift motion. To put them back in place, it's just as easy, as the strap just needs to be pulled upwards and forwards to undo the folding motion.

Most Honda Odyssey trims have Magic Seats in their second rows as well. These trims re the ones that have eight total seats. The middle seat in that second row can be removed all together, if not needed. Then, the remaining seats can then be slid from side to side. They can be placed together to create more room for passengers to access the third row, or they can be separated to create an open area in the middle. It's also simple to slide the seats to the front and back or to fold them down.

Several trims provide extra warmth with heated front seats, and one even has ventilation in its front seats. Some have leather upholstery to add more sophistication to the cabin. Otherwise, the default option is to have fabric seats.

Minivans aren't always thought of as powerful vehicles, but the Odyssey certainly is. It runs on a 3.5-liter V6 engine, and it can make 280 horsepower and 262 pound-feet of torque. With this much capability, drivers can be confident on the roads, even when loaded down will full cabins. Honda has paired the V6 with a ten-speed automatic transmission.

Hill start assist is a great feature to have when stopped on a slope, facing upwards. It keeps pressure on the brakes while the driver switches from the brake to the gas pedal. This prevents the vehicle from rolling backwards before it's ready to accelerate.

One downside of the Honda Odyssey is that it's only available with front-wheel drive. Some may need the extra traction that comes along with all-wheel drive, but it just isn't an option with this model. What the Odyssey does have is intelligent traction management. This program provides drivers with a snow mode. It can increase stability and traction when the road becomes hard to grip. The Odyssey has vehicle stability assist and traction control as well.

Many people find the Odyssey to be so practical. It comes standard with push button start and automatic climate control. Most models actually have climate control with three zones and second-row controls. There could be integrated sun shades, an automatic-dimming rearview mirror, and LED ambient lighting. Beverage holders are found in every row, too.

While the entry-level trim is limited to having a five-inch LCD screen, it does have Bluetooth and a seven-speaker sound system. All the other trims are upgraded with Apple CarPlay and Android Auto, and they have eight-inch touchscreens. In addition, they come with SiriusXM so that dozens of high-quality channels become available to listen to. Navigation is standard on select trims.

It's likely that the someone interested in the Odyssey will have children riding in the back at some point. To keep them entertained, there's an available rear-seat entertainment system. It consists of a Blu-Ray player, wireless headphones, an a 10.2-inch screen that can stream apps.

One other cool feature is the in-cabin PA system. It can sometimes be hard for the the passengers in the back to hear the driver, and this system projects the driver's or the front-passenger's voice through the headphones and/or speakers.

Honda has given the Odyssey a good set of driver-assist technologies. Every Odyssey can warn drivers when they're approaching other vehicles too quickly, when they're veering out of their lanes, or when other vehicles are in their blind spots. Many models have cross traffic monitors, and all trims also have adaptive cruise control.

The Honda Odyssey is very well designed. It has clever seating solutions, plenty of space, and a lot of convenient amenities. On top of this, it can keep people safe and entertained. It would be a smart purchase for minivan customers who don't necessarily need all-wheel drive.

Note: All Honda Odyssey MSRP, invoice and dealer cost dollar figures above are subject to change without notice.