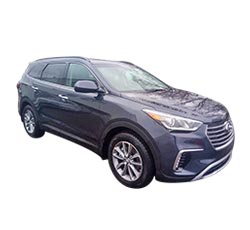 For several years, Hyundai has made a mid-size SUV that can either come with two or three rows. Previously, the company offered a two-row Santa Fe Sport and a three row Santa Fe. For 2019, the nomenclature has changed just a bit; the Santa Fe Sport is now called the Santa Fe, and the three-row version is the Santa Fe XL. The Santa Fe XL has seating for up to seven, making it an attractive SUV for people who need more room for passengers.

Two trims are available on the 2019 Hyundai Santa Fe XL. The SE is the more basic version, and the LIMITED Ultimate offers a bit more. Both can either come with front-wheel drive or all-wheel drive.

An important difference between the two is that the SE includes seven-passenger seating with a middle bench. That bench has a 40/20/40 layout, so things can be configured in various ways. The LIMITED Ultimate only has space for six, with the middle row being set up with captain's chairs. In both versions, the middle row seats can slide up and back, and the third row consist of a split bench seat.

Powering the 2019 Hyundai Santa Fe XL is a V6 engine with a displacement of 3.3 liters. With 290 horsepower and 252 pound-feet of torque, the engine uses direct injection and has a 24-valve system with continuously variable valve timing to improve performance. Towing capacity with this V6 engine is 5,000 pounds.

Premium rear and lower front fascias along with chrome-tipped exhaust pipes give the 2019 Hyundai Santa Fe XL a modern look. Side rails on the roof rack provide some extra convenience if anyone has plans to carry their gear on top. The projector headlights are enhanced with LED accents, and since there is an automatic headlight control on the XL, drivers can cross one thing of their to-do lists.

A handful of upgraded elements on the LIMITED Ultimate set it apart. For instance, the taillights and foglights are all made with LEDs, and the heated side mirrors have turn signals built into them. If preferred, the higher trim can come with HID headlights.

For convenience, LIMITED Ultimate drivers can take advantage of the keyless entry and push button start. When they have a lot in their hands, the smart liftgate can take care of opening itself.

The 2019 Hyundai Santa Fe XL can either come with stain-resistant cloth or leather seats. Those leather seats, along with heated front and second-row seats, come standard on the LIMITED Ultimate. The LIMITED's heated steering wheel and interior wood finish each provide a more elegant feel in the cabin. In addition, its panoramic sunroof can be opened up to bring in some fresh air.

Around the SUV, there are numerous features that have been well thought out. The steering wheel can be adjusted by tilting and/or telescoping, and there is storage embedded under the cargo area and in the center armrest. 12V power outlets are placed in the front, middle, and rear of the SUV, and a 115V outlet comes in the cargo area of the LIMITED Ultimate.

In terms of technology, a big benefit of driving a 2019 Hyundai Santa Fe XL is that both trims come with Android Auto and Apple CarPlay compatibility. Those systems, along with Bluetooth wireless connectivity, make it easy to access information such as contacts and downloaded music on one's phone. Calls can be taken through the car's speaker system, and certain apps can be controlled through the vehicle.

On the SE, the display is seven inches, and an eight-inch touchscreen is in place on the LIMITED Ultimate. The more basic trim includes six speakers on which AM/FM, HD Radio, and SiriusXM music can be played. The higher trim uses an Infinity Premium Audio system that has a more high-quality output.

Drivers of the XL will appreciate having a rearview camera in place. This can automatically turn on when backing up at slow speeds. This camera is upgraded to a system with multiple points of view on the LIMITED Ultimate.

While there is a full array of airbags, crumple zones, and traction control systems in place on the SE, the LIMITED Ultimate has many more advanced features. It comes standard with rear parking sensors that provide more interactive assistance when backing in or out of tight spots as well as a cross-traffic alert system. It also includes mechanisms that keep drivers from veering out of their lanes or from changing lanes when vehicles are in their blind spots. Even more advanced features, like high beam assist or emergency braking that can be engaged automatically are optional on the LIMITED Ultimate.