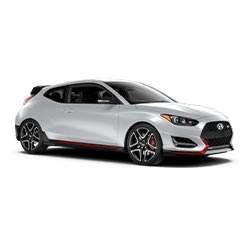 Price Tip:
To find the best possible price on a new Hyundai Veloster, shop prices online first. Get up front pricing before you walk into a dealership. We recommend the following free services; Car Clearance Deals,   Edmunds,   NADAguides,   Motortrend  &   CarsDirect
These services will offer you the lowest prices and supply you with multiple competing price quotes. You will know the best price before you visit the dealer.

How to Calculate The Dealer Cost of a Hyundai Veloster

The Veloster has been in production for about a decade, but for this year, all of the trims have been eliminated except for the 2022 Hyundai Veloster N. While some might be disappointed about this news, many will be pleased that Hyundai decided to keep the version that does the best in terms of performance. The 2022 Veloster N is quick and responsive, and it has stylistic details that match its aggressive nature.

Under the hood of the Veloster N, there's a turbocharged, 2.0-liter engine. It's able to make the car quite lively, as it's capable of delivering 275 horsepower and 260 pound-feet of torque. Front-wheel drive is standard, as is a six-speed manual transmission. People who aren't comfortable with stick shift don't need to worry, though, since there's the option to get an eight-speed wet dual clutch transmission.

Different drive modes give the Veloster N a different feel. Normal is obviously the default mode, and Sport allows for sportier shifting, a bit of oversteer, and increased damping. Sport+ makes the car even more aggressive, and it results in earlier downshifts to keep things humming at high speeds as well as a more rigid suspension for faster cornering. If anyone wants to push things to the limits, there's a special N mode.

In these various modes, the amount of sound generated by the exhaust can change. Sport and Sport+ are both associated with louder engine sounds that mimic what one might hear around the race track.

This car sits low to the ground, having a clearance of 5.3 inches, and it has a fairly wide stance. Having a low center of gravity improves handling and makes it look like it's ready to race. The Veloster N rides on 19-inch wheels and has an edgy look that has helped it gain many fans. The rear diffuser, gloss black two-stage rear spoiler, and tinted glass all add to the style.

It has LED headlights, LED daytime running lights, and LED taillights. Its center high-mount stop light uses an LED, too. The gloss black side mirrors have heating elements built into them to combat frost and ice buildup in the colder months.

The sporty front bucket seats are supportive. Their black upholstery contrasts nicely with the light blue stitching and light blue seatbelts. Second-row leg room is only 34.1 inches, and the cargo area has a volume of just under 20 cubic feet. One or both sides of the rear bench can be lowered to expand cargo capacity. When the entire setback has been folded down, total cargo volume is 44.5 cubic feet.

When it comes to technology, the Veloster N has many nice features. It comes standard with an eight-inch touchscreen, along with integrated navigation, Android Auto and Apple CarPlay, and SiriusXM. It even has an Infinity premium audio system that uses an external amp and provides the car with a subwoofer. With Bluetooth, people can make hands-free phone calls and use their voice to issue certain commands.

The Veloster N has plenty of advanced mechanisms that are ready to protect passengers at any moment. Thanks to multiple sensors, the car knows when it's approaching other vehicles too quickly and knows when it's veering out of a lane, about to back up into cross traffic, or whether there's a vehicle in the driver's blind spot. If necessary, the Hyundai can correct its steering or hit the brakes to stay out of harms way. Also, this car can sense when the driver should be focusing more of his her attention on the road, and if so, it'll send out an alert.

Anyone who likes the look of hatchbacks and would love to drive a performance-oriented vehicle will be very pleased with the 2022 Hyundai Veloster N. While it has a strong engine and advanced technology, it also has some elements that make it feel unique.

Note: All Hyundai Veloster MSRP, invoice and dealer cost dollar figures above are subject to change without notice.