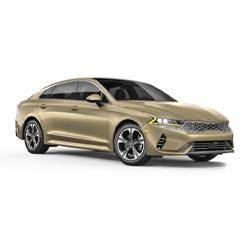 The K5 is Kia’s all-new midsize sedan, which takes the place of the outgoing Optima. Not only does the 2021 Kia K5 have a more striking exterior, but it also offers a more fun driving experience. Several new high-tech features are on the car’s list of options. Kia’s 100,000-mile powertrain also remains a big perk. Could the K5 be the best midsize sedan on the market?

The new K5 is a four-door sedan that competes in the midsize segment. While a front-wheel-drive setup comes standard, an AWD system will be offered later in the model year.

What Trim Levels Does It Come In?

The base LX trim is bound to be a popular choice. Like most of the lineup, it comes equipped with a 1.6-liter, turbo four-cylinder engine. Stylish LED headlights and 16-inch alloy wheels add to the base model’s attractiveness. Some of the interior highlights include an 8.0-inch touch display with advanced smartphone support, two-zone automatic temperature control, and a six-speaker stereo.

A few more niceties are found on the K5 LXS. With their smartphone in hand, Kia’s UVO telematics system allows drivers to remotely start the engine and unlock/lock the doors. Parents will appreciate the Safe Exit Assist system. If a vehicle is approaching from the side, it will help prevent kids from opening the rear doors into traffic.

Buyers who prefer a sportier look will be interested in the GT-Line trim. It features racier bumpers and a more striking set of 18-inch alloy wheels. Just a few more interior upgrades are found on the GT-Line, including a power driver’s seat and rear USB ports. A 10.25-inch infotainment display with split-screen functionality and a Bose premium sound system are optional.

Another step up the trim ladder is the K5 EX. It offers a lot of luxuries for the money. Highlights include climate-controlled front seats, a wireless smartphone charger, and a panoramic sunroof.

Equipped with a larger 2.5-liter turbo engine, the range-topping K5 GT is the most powerful model. A sport suspension and upgraded brakes also help enhance performance. In terms of exterior styling, this fun model looks a lot like the less powerful GT-Line trim. Sport seats make the K5 GT even more appealing to driving enthusiasts.

In comparison to the outgoing Kia Optima, the 2021 Kia K5 has a lower and wider stance. This helps create an extra sense of sportiness. An updated “tiger nose” grille and cool headlights make the K5 especially appealing to younger buyers. Buyers can also get the K5 with a black roof, which promotes a contrasting look. A total of five exterior colors will be offered initially, including Passion Red Tint Coat and Sapphire Blue.

Drivers should enjoy the K5’s high-tech features. While the optional 10.25-inch HD touchscreen is extremely nice, most people will have no complaints about the standard 8.0-inch touchscreen’s performance. Furthermore, Apple CarPlay isn’t available on the larger display. Choose the optional 12-speaker Bose audio system for a more exciting soundtrack. According to several automotive critics, the K5’s available wireless smartphone charger is far better than average.

Kia rates the sedan’s base engine to push out 180 horsepower. This is plenty of power for daily commuting. Upper trims benefit from a fun-inducing sport mode. However, performance rises tremendously with the larger 2.5-liter turbo engine. It pushes out 290 horsepower, thus enabling drivers to move out at a quicker pace.

In the past, the Kia Optima lacked the driving dynamics to compete with the segment leaders. However, that’s not the case for the 2021 Kia K5. All versions of the sedan feel poised and athletic.

Fuel economy for the new 2021 Kia K5 is competitive. According to the federal government's ratings, drivers can average up to 29 mpg town/38 mpg freeway. Even the more powerful GT model is relatively frugal.

Families will not mind spending time inside the new K5. Like most midsize sedans, the 2021 Kia K5 is built to accommodate up to five people. There’s a good amount of legroom available for all passengers. Interior quality is also very good for the class.

Advanced safety technologies, like forward collision intervention and lane-keep assist, are found on every new 2021 Kia K5. However, buyers will have access to some other cutting-edge driving adds. The car’s upgraded smart cruise control system features “curve-control” technology. By using the navigation system to detect upcoming bends in the road, it’s able to set the appropriate speed a head of time. A blind-spot camera is also offered, which seriously improves driver awareness on the highway.

Kia now has another fun car for drivers to choose from. The new 2021 Kia K5 outclasses the previous Kia Optima is several aspects. While the base model may the least expensive model in the lineup, it’s far from a downgrade.

How to Calculate The Dealer Cost of a Kia K5

Note: All Kia K5 MSRP, invoice and dealer cost dollar figures above are approximate amounts. Prices are subject to change without notice.