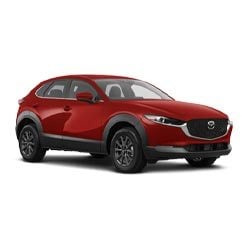 Price Tip:
To find the best possible price on a new Mazda CX-30, shop prices online first. Get up front pricing before you walk into a dealership. We recommend the following free services; Car Clearance Deals,   Edmunds,   NADAguides,   Motortrend  &   CarsDirect
These services will offer you the lowest prices and supply you with multiple competing price quotes. You will know the best price before you visit the dealer.
How to Calculate The Dealer Cost of a Mazda CX-30:

The Mazda CX-30 is a two-row SUV that's modern, agile, and affordable. It's able to attract attention from customers who value style and want to treat themselves to something that feels upscale but is still practical.

This year, the CX-30 gains all-wheel drive as a standard component. Plus, the Carbon Edition joins the lineup. It has a distinct style with red leather seats and a Polymetal Gray exterior.

The lower and mid-level trims run on 186-horsepower engines. These engines have displacements of 2.5 liters, and they make 186 pound-feet of torque. This is a satisfactory amount of power, even though it doesn't make the CX-30 particularly exciting to drive. That being said, having all-wheel drive helps improve the CX-30's handling, as does the standard G-Vectoring Control Plus program.

There are three trims at the top of the lineup that all have "turbo" in their name. It makes sense that all of these trims use turbocharged engines. These engines have displacements of 2.5 liters as well. Because they're able to do more work, they can make up to 250 horsepower and 320 pound-feet of torque.

Both versions are paired with a six-speed electronically controlled sport automatic transmission. Select trims have paddle shifters to make the driving experience a bit more dynamic. Those trims are the Premium, Turbo Premium, and Turbo Premium Plus.

Other elements are impressive, too. For instance, the windshield wipers on every trim can turn themselves on automatically when it rains, and the available side mirrors can have integrated turn signals, heating elements, and memory. Many trims have power moonroofs, and some have power lift gates.

Another way in which the Mazda CX-30 stands out is by having multiple driver-assist technologies as standard components. The base trim has driver attention alert and adaptive cruise control, along with lane keep assist, frontal collision warning, and brake support. Almost all trims are enhanced further with blind spot monitoring and rear cross traffic alert. The highest trim is complete with a 360-degree monitor, front and rear parking sensors, and rear automatic emergency braking.

Eight trims are available. As mentioned earlier, one major way in which the top three trims are differentiated from the others is by having the turbocharged engine. Of course, there are many other ways in which the trims differ.

The first trim in the lineup is the 2.5 S. It has remote keyless entry and push-button start, and it has black cloth seats. Its 8.8-inch center display comes with Apple CarPlay and Android Auto. There are eight speakers as well as Pandora internet radio integration and HD Radio.

The Select is next. It can keep people comfortable with dual-zone climate control and rear air-conditioning vents. It's upgraded with leatherette seats, and instead of having a regular keyless entry system, it has advanced keyless entry. A button doesn't even have to be pushed to unlock the doors; someone just has to touch the sensor on the door handle with the key fob somewhere in close proximity.

Following the Select is the Preferred. Its main enhancements are heated front seats and a power-adjustable driver's seat with two-position memory. This is the level at which a power moonroof becomes standard.

The Carbon Edition has most of the same components that are found in the Preferred, but it has an elevated style. Its red leather seats give the cabin a bold look, and the exterior color is a metallic gray color. This matches well with its black wheels.

The nicest trim with the standard engine is the Premium. It's a model that has signature LED lighting, a power liftgate, and paddle shifters. In addition, the Premium feels much more upscale than the lower trims because of its technology. It comes with integrated navigation and SiriusXM Satellite Radio, along with a Bose 12-speaker sound system.

With a turbo engine under its hood, the Turbo offers a bit more fun for the driver. This engine is the Turbo's main advantage. It goes back to having leatherette seats, and it doesn't have navigation. It does, though, have a frameless auto-dimming rearview mirror and SiriusXM.

If someone wants those high-end elements and the more capable engine, there's the Turbo Premium. It's very similar to the regular Premium trim, except it also has a heated steering wheel.

Finally, the Turbo Premium Plus offers amazing features in just about every area. It's the one that has a 360-degree camera, parking assist, and reverse automatic braking, in addition to all of the components found on the Turbo Premium.

There are so many options when it comes to the CX-30, so this model really does have a wide appeal. Those who stick with the lower trims will still get treated to a lot of amenities, and anyone who has a larger budget will get to take advantage of so many features.

Note: All Mazda CX-30 MSRP, invoice and dealer cost dollar figures above are subject to change without notice.