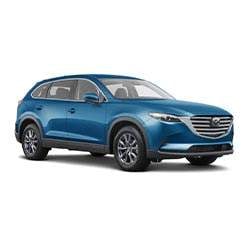 Price Tip:
To find the best possible price on a new Mazda CX-9, shop prices online first. Get up front pricing before you walk into a dealership. We recommend the following free services; Car Clearance Deals,   Edmunds,   NADAguides,   Motortrend  &   CarsDirect
These services will offer you the lowest prices and supply you with multiple competing price quotes. You will know the best price before you visit the dealer.
How to Calculate The Dealer Cost of a Mazda CX-9:

Mazda has done very well in designing vehicles that feel like luxury cars and SUVs. The CX-9 is a prime example. While it doesn't have a price tag that would normally be associated with a high-end model, it treats passengers to a smooth ride and plenty of amenities. As a three-row SUV, it's still not exactly cheap, but it does have a very reasonable cost considering its capabilities, technology, safety components, and other features.

Once piece of news that will intrigue potential buyers is that all-wheel drive has become standard. Another thing that needs to be mentioned is that there's a new trim. It's called the Touring Plus, and it adds a few extra elements to the Touring package. This means that there are now six available trims.

Under the hood of the Mazda CX-9, there's a 2.5-liter engine that's been enhanced with a turbocharger. It can make up to 250 horsepower and 320 pound-feet of torque, and as just mentioned, every engine is paired with an all-wheel-drive system. That system comes with off-road traction assist that can be useful when the SUV is facing tough conditions.

Mazda has gone with a six-speed automatic transmission. Sport mode can be selected in case anyone wants to make the SUV more spirited and aggressive. There's a manual shift mode, too.

The CX-9 is more than just a good-looking vehicle. It can haul a decent amount of weight, as it has a towing capacity of 3,500 pounds. This isn't as much as what some full-size SUVs can haul, but it's definitely more than what many two-row SUVs can handle.

Every one of the CX-9 trims features Bluetooth, HD Radio, Apple CarPlay, and Android Auto. Most also have SiriusXM and wireless charging, along with premium Bose sound systems that have 12 speakers. The center display measures 10.25 inches, and voice commands are accepted so that drivers can keep their hands on the wheel. Higher trims are set up with navigation and SiriusXM Traffic and Travel Link.

Another screen is integrated into the cabin. This one is right behind the steering wheel, and it shows key vehicle information. On the lower trims, it measures 4.6 inches. Higher trims have seven-inch displays that are easier to read.

There's a long list of standard safety components. The CX-9 has traction control and roll stability control, both of which are continually monitoring performance and are ready to make adjustments at any time. This SUV also has a blind-spot monitoring, rear cross-traffic alert, and forward collision warning. It's so reassuring to know that the Mazda can look out for other vehicles on the driver's behalf.

In certain situations, such as when the CX-9 is approaching an object too quickly or when its moving out of the center of a lane, mitigation systems can kick into gear. The vehicle can make adjustments to steering and/or braking if it seems like this is necessary to avoid an accident. In addition, the SUV comes standard with adaptive cruise control, and it can have parking sensors, a driver attention alert system, and a 360-degree camera.

The most affordable trim is the Sport. It actually has a lot of nice elements, such as push button start, three-zone automatic climate control, and heated front seats. Its exterior is well-equipped also. There are LED headlights, LED daytime running lights, and heated side mirrors with integrated LED turn signals. The wheels measure 18 inches and are aluminum-alloy versions. One thing that is a bit limiting is the fact that the Sport is only available in four colors.

In contrast, the Touring is available in six colors, including a bright Soul Red. It's been upgraded with a power liftgate and an auto-dimming rearview mirror. Perhaps the most notable enhancement is that the Touring has leather upholstery. While the Sport trim has seven total seats, the Touring can either have six or seven. The six-seat configuration would be achieved if the vehicle is set up with a pair of captain's chairs in the middle row.

The Touring Plus, the newest trim, is similar to the Touring. However, it has ventilation in the front seats, and it has wireless charging and SiriusXM. Its LED fog lights help when visibility is low. Importantly, this trim comes with a power moonroof, which some people will love.

Next is the Carbon Edition. It's only available in Polymetal Gray Metallic, and it features red leather seats. Other stylistic details include an aluminum interior trim and black interior accents. Further, this trim comes with adaptive front lights, a hands-free power liftgate, and a heated steering wheel.

Last are the Grand Touring and Signature. They offer an active driving display with traffic sign recognition, and they have built-in navigation. Those in the second row can appreciate their heated seats. The Signature stands out with its genuine Santos Rosewood inlays as well as its Nappa leather seats.

One last thing to keep in mind is that the Carbon Edition and Signature are only available with six seats, while the Touring Plus and Grand Touring, like the Touring, can come with either six or seven seats.

Note: All Mazda CX-9 MSRP, invoice and dealer cost dollar figures above are subject to change without notice.