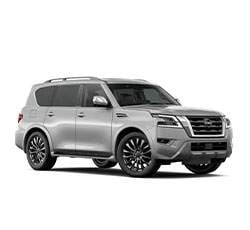 Price Tip:
To find the best possible price on a new Nissan Armada, shop prices online first. Get up front pricing before you walk into a dealership. We recommend the following free services; Car Clearance Deals,   Edmunds,   NADAguides,   Motortrend  &   CarsDirect
These services will offer you the lowest prices and supply you with multiple competing price quotes. You will know the best price before you visit the dealer.

How to Calculate The Dealer Cost of a Nissan Armada

The Armada is Nissan's largest SUV. Offering three rows of seats, it has plenty of space, and it's been equipped with an impressive number of high-end features. It might not have the name recognition that some other SUVs have, but it's certainly something to consider if anyone prefers driving an upscale model.

2021 was a year in which the Nissan Armada was upgraded significantly, so it makes sense that little is different about the 2022 model year. Trims remain the same, with there being five to choose from. The top-level Platinum now has a one-touch power-folding third row.

This large SUV runs on a 5.6-liter V8. The engine is quite sizable, and it's capable of making 400 horsepower and 413 pound-feet of torque. The SUV feels lively and seems like it can handle challenges with ease. It uses a seven-speed automatic transmission, which offers a manual shift mode.

With all of this power, it can tow up to 8,500 pounds. The available auto-leveling suspension can even out the ride if the Nissan is weighted down in the back. The available trailer-sway control and integrated brake controller can make hauling cargo to be much safer. Plus, an intelligent around view monitor can provide a lot of assistance when drivers are trying to line themselves up with trailers.

Rear-wheel drive is the standard configuration, but there's the option to get all-wheel drive. The 4x4 system has a two-speed transfer case. 4HI would be ideal for many situations, and 4LO can be used for especially tricky conditions. If one of the wheels begins to slip, the Armada will apply brakes to that wheel and instead send power to those that have the best traction.

As one might imagine, the V8 engine isn't the most efficient. A rear-wheel-drive Armada earns an estimated 19 miles per gallon on the highway and 14 miles per gallon in the city. Having all-wheel drive drops each of those numbers by one mile per gallon.

Technology is an area in which the Nissan Armada stands out. Every one of its trims features a 12.3-inch touchscreen and navigation. Navigation is enhanced by SiriusXM Traffic and Travel Link, which can provide updates on upcoming conditions.

The touchscreens come with Apple CarPlay and Android Auto, as well as SiriusXM. Users can use the screens to make adjustments, or they can take advantage of the voice recognition capabilities.

Many trims have Bose speaker systems. They get to have Bose AudioPilot technology to make the quality of the sound richer. Wireless charging is an available feature, and some models have five USB ports while others have four.

The Armada can accommodate up to eight people since the third row has a bench that can seat three. The lower trims come standard with a bench seat in the middle row. Each side of that bench can tip up so that it's easier for passengers to access the third row.

Higher trims can have captain's chairs in the middle row. Those chairs can also tip up, but they might not need to if someone can make their way around them. There's a gap in between those captain's chairs, and this is why some like this configuration better. It opens things up and gives riders some more space to move around.

As mentioned earlier, there are five available trims. The S is the first one in the lineup. It rides on 18-inch aluminum-alloy wheels that have a 12-spoke design. It looks modern with its LED headlights, LED daytime running lights, and chrome door handles. Even its side mirrors are advanced, as they have a power-folding function, heating elements, and integrated turn signals. Inside the cabin of the S, there are power-adjustable front seats. Both the steering wheel and shift knob are wrapped in leather, and the seats are trimmed in cloth.

The SV is upgraded with leatherette seats and heated front seats. Plus, it has rear privacy glass, which many people prefer. Like the S, it has a full set of driver-assist technologies that can alert drivers to issues and help prevent accidents by taking corrective measures.

With the SL, which rides on 20-inch wheels, there is a power liftgate for convenience, and the outside mirrors can automatically dim to reduce glare. Those mirrors have puddle lights to serve as a welcoming signal as people approach the SUV. Its driver's seat, steering wheel, and side mirrors all have a memory system. Further, the SL has LED fog lights to improve visibility, and it has leather seats.

As its name suggests, the Midnight Edition has a dark aesthetic. It features a black grille and black badging, along with other black accents. More black is found throughout the cabin, including on the headliner.

The Platinum represents the best of what Nissan has to offer. Notably, it has a tri-zone entertainment system that consists of two wireless headphones, a remote, and two eight-inch monitors. The Platinum has the nicest cabin with a heated steering wheel, quilted leather seats, and heated and ventilated seats. Those in the second row get to enjoy heated seats, too.

Nissan has done a great job in designing the Armada. It's durable, rugged, and comfortable, and it feels luxurious in many ways. It does have a steep price tag, but it certainly justifies that with so many features.

Note: All Nissan Armada MSRP, invoice and dealer cost dollar figures above are subject to change without notice.