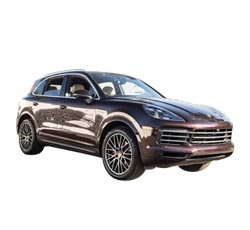 Price Tip:
To avoid overpaying on a new Porsche Cayenne, shop prices online first. Get up front pricing before you walk into a dealership. We recommend the following free services;
Car Clearance Deals,
MotorTrend
CarsDirect
These services will offer you the lowest prices and supply you with multiple competing price quotes. You will know the best price before you visit the dealer.
Porsche Cayenne Overview:
One of the hottest luxury SUV models for the year is, without a doubt, the 2018 Porsche Cayenne. This year's line-up features a number of different configurations that make the Cayenne capable of meeting a variety of drivers' needs. The Cayenne, as a luxury vehicle, is loaded to the brim with standard and optional safety and infotainment features, has a gorgeous interior and exterior, and puts in an incredibly powerful driving performance. While this is not the most spacious vehicle in its class, the Cayenne is difficult to beat in many other areas.

Essentially no real changes have been made to the 2018 Porsche Cayenne since the Cayenne is due for an overhaul in 2019. The only noticeable change is that there is an improved air filter for the cabin, which has its performance reflected on the instrument panel.

This midsized SUV is capable of seating five additional people and is only available in one body style.

There are a grand total of six different trim levels available on the 2018 Porsche Cayenne. The base trim is known simply as the Cayenne, and it is powered by a 3.6-L V6 engine that generates 300 hp and 295 lb-ft of torque. Features included on the base model are heated mirrors, front seats that are adjustable eight ways, and satellite radio. The next level up is the Cayenne S, which has a turbocharged version of the base engine and features parking sensors in the front and rear, a sunroof, and Power Steering Plus. The Cayenne S E-Hybrid slots above that and is powered by a 3.0-L engine and electric motor that, together, create 416 ho and 435 lb-ft of torque. The hybrid variant has smartphone app integration, energy management on the display, and an onboard charger. The GTS trim has an upgraded version of the S's engine and features adjustable air suspension that is specifically tuned, bigger brakes, and simulated suede in the cabin. The Turbo has a 4.8-L V8 engine that generates 520 hp and 553 lb-ft of torque. This trim boasts sport seats up front and a superb 14-speaker sound system. The line-topping Turbo S has a V8 that creates an astounding 570 hp and 590 lb-ft of torque and features the utmost in performance mechanics, including carbon ceramic brakes. Also, there are two Platinum Edition models available as well as numerous optional packages for each trim level.

As far as driving goes, it doesn't get much better than the 2018 Porsche Cayenne. This 2.5-ton vehicle can get from 0 to 60 mph in around 5.4 seconds, which is incredible for its class. Not only does it accelerate well, but its brakes work without issue, coming to a panic stop from 60 mph in just 106 feet, thereby outperforming a lot of smaller sport sedans. The steering is impeccably responsive and never feels fatiguing for the driver, and you can easily switch between driving modes to get the performance you desire. The Cayenne's handling is also superb and, despite a little bit of nosedive at high speeds, can navigate winding roadways and regular driving situations with ease. The only time the auto stop-start feature becomes a nuisance is when you are stuck in heavy traffic. As for off-roading, the Cayenne gets sufficient ground clearance and handles most terrains well.

Given its powerful engines, the Cayenne can't be expected to get great gas mileage. At its best, the E-Hybrid gets a combined 22 mpg, though this is bested by competitors. The gas-only engines certainly get less, with the Turbo and Turbo S getting the worst at 14 mpg city/21 mpg highway. These numbers do best some competitors.

The 2018 Porsche Cayenne is chic and powerful. Its numerous configurations mean that there is a little something for everyone and definitely warrants a test-drive.

How to Calculate The Dealer Cost of a Porsche Cayenne:

Note: All Porsche Cayenne MSRP, invoice and dealer cost dollar figures above are approximate amounts. Prices are subject to change without notice.