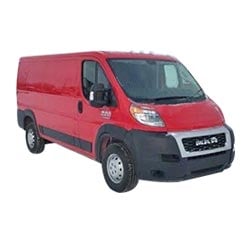 Full-size cargo vans have changed more drastically than almost any other vehicle in the last few years. Once, the term referred to heavy-duty components and jumbo frames. Now, you'll find models like the 2019 Ram Truck ProMaster Cargo Van come with lighter, narrower frames that are easier to drive.

Some competitors continue to build on truck frames, while others have moved to unibodies similar to car frames. This year, the ProMaster Cargo also comes with a unibody and also delivers its power to the front wheels. This makes it stand out even further since all its rivals have rear-wheel drive.

This directional change matters because it makes it easier to load cargo -- and passengers, for that matter. Plus, the extra weight of the engine gives you better traction on the road. It does limit how much you can tow, however. Although it's capable of pulling 30 percent more than previous years, it's still a couple hundred pounds short of its competitors.

Of course, chances are you won't do too much towing as you will hauling, and the ProMaster is a leader here. It can carry a payload of 4,680 pounds.

If you need a commercial van that doesn't need to look conventional, then the 2019 Ram Truck ProMaster Cargo Van will suit your needs perfectly. You'll be rewarded with superior handling, a hefty payload limit, and little difficulty unloading and loading.

The 2019 Ram Truck ProMaster Cargo Van is part of the generation first introduced for 2015.

As mentioned before, Ram improved the ProMaster's payload and towing capacities by 30 percent. Finally, the van also sees a few updates to the front-end styling. Besides that, there are no other changes.

As the name suggests, the 2019 Ram Truck ProMaster Cargo Van is a full-size cargo van.

The ProMaster contains the same standard features no matter which trim you get. That means the best one that works for you will depend on the roof height or the length of wheelbase you need for your work. The lower-numbered models get a smaller wheelbase and lower roofs.

Capable of seating two, the 2019 Ram Truck ProMaster Cargo Van comes with a vast cargo area meant for storing big gear. Throw away your idea of typical trim levels here; instead, you get levels called 1500, 2500, and 3500. These numbers refer to the vehicle's size, in which the more significant number corresponds to longer wheelbases and more prominent roofs.

Underneath the hood of every ProMaster is a 3.6L V6 engine capable of generating 260 pound-feet of torque and 280 horses. Unlike all its rivals, the ProMaster delivers its power to the front wheels, and it does so with a six-speed auto.

Starting at the inexpensive end of the spectrum gets you the 1500. This level has a gross vehicle weight rating of 8,550 pounds. Depending on configuration, you can carry between 3,770 and 3,990 pounds of payload. The standard choice is a 118-foot wheelbase with a low roof, but you can upgrade to the 136-inch base and high ceiling.

Finally, the 3500 has a gross vehicle weight rating of 9,350 pounds, allowing you to carry up to 4,430 pounds of payload depending on your configuration. The 136-inch wheelbase is new for this year and now standard, but you can also get the 159-inch base instead.

All ProMaster levels come with 16-inch steel wheels, tie-down rings in the cargo area, manually-adjustable mirrors, and a four-speaker sound system with USB ports and an aux jack. The steering wheel only offers telescoping motion. You will also get the Uconnect interface through a 5-inch touchscreen.

The two upper levels have a heavy-duty suspension to help support the extra weight it can carry.

In all cases, you can add several upgrades. These include heated seats, a tow hitch, daytime running lights, and cargo-area climate control. You can also have a suspended driver's seat installed, which is a must for taller drivers.

Driving a 2019 Ram Truck ProMaster Cargo Van gives you a well-tuned 3.6L V6 that is remarkably silent. Its quiet presence and easy handling make it perfect for driving around crowded city centers. Plus, the ProMaster offers generous forward visibility and a tight radius for turning corners.

Inside the van, the seats are comfortable but the driver's seat positioning is strange. The steering wheel won't tilt and can only telescope vertically. If you can imagine the steering wheel of a city bus, you're thinking of the ProMaster. If you're a tall driver, the high roof is a must.

You won't find luxury in the cabin, either. Like other cargo vans, the 2019 Ram Truck ProMaster Cargo Van functions like a powerful beast, but it's not about the form at all. There's no blind-spot monitoring either, so it's recommended to get the all the optional mirrors for the best possible visibility range.

Because it has a low lift height, the ProMaster presents little challenge for those loading and unloading cargo. The short wheelbase provides 259 cubic feet of volume. Going up the trims gets you up to 467 cubes of space.

All ProMaster trims come with a 5-inch touchscreen that displays Ram's Uconnect interface. You'll also get a rearview camera.

How to Calculate The Dealer Cost of a Ram Promaster:

Note: All Ram Promaster MSRP, invoice and dealer cost dollar figures above are approximate amounts. Prices are subject to change without notice.