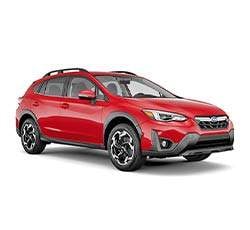 Subaru Crosstrek Pricing for the Base, Premium, Sport, Limited and Hybrid Trims

Price Tip:
To find the best possible price on a new Subaru Crosstrek, shop prices online first. Get up front pricing before you walk into a dealership. We recommend the following free services; Car Clearance Deals,   Edmunds,   NADAguides,   Motortrend  &   CarsDirect
These services will offer you the lowest prices and supply you with multiple competing price quotes. You will know the best price before you visit the dealer.

How to Calculate The Dealer Cost of a Subaru Crosstrek

The Crosstrek might be Subaru's smallest SUV, but it still has a lot to offer. It has good ground clearance and standard all-wheel drive, which is part of its appeal as a Subaru, and it can be set up with advanced technology. With this model, as well as many of its others, Subaru has gone for a rugged look rather than trying to make things feel elegant or upscale. The result is a practical and versatile SUV that is a crowd-pleaser.

There are three types of powertrain to consider. Honestly, none of them are particularly outstanding, but they're all solid options.

The first engine is a 2.0-liter version that can make 152 horsepower and 145 pound-feet of torque. The next one is slightly larger, having a displacement of 2.5 liters. It can generate 182 horsepower and 176 pound-feet of torque. This is a modest increase in power, but it will definitely be noticeable when the vehicle is loaded down with cargo or climbing hills. With either engine, towing capacity is 1,500 pounds, but it's probably a good bet that the larger engine feels more adept when towing a trailer.

Lastly, there's a hybrid powertrain that uses an electric motor and a 2.0-liter engine. Together, they create a net horsepower of 148. The Crosstreks that have this configuration have a slightly lower towing capacity of 1,000 pounds.

As mentioned, each Crosstrek comes standard with symmetrical all-wheel drive. This system can be relied upon when the roads are slippery. Additionally, each Crosstrek has traction control and active torque vectoring. Many models are also equipped with hill descent control and X-MODE, which is a program that can enhance traction.

The Crosstrek Hybrid is actually a plug-in hybrid. As such, it can run exclusively on electric power for limited amounts of time. It can travel up to 17 miles while not using any gasoline. Obviously, this isn't enough range for the vehicle to be able to rely only on the electric motor. Not to worry, though, since the gas-powered engine can kick in at any time. Overall, the Crosstrek Hybrid's estimated fuel economy is 90 MPGe.

With the tradition engines, the Crosstrek does pretty well in this area. When set up with a manual transmission and the smaller engine, the SUV gets an estimated 22/29 (city/highway) miles per gallon. That increases to 28/33 miles per gallon with the automatic transmission. This is very close to the fuel economy of 27/34 miles per gallon that the 2.5-liter engine can achieve.

Five trims are offered. The base model and Premium both have the 2.0-liter engine, and the Sport and Limited use the 2.5-liter engine. It comes as no surprise that the Crosstrek Hybrid is the one that uses the hybrid powertrain.

On the base trim, there are 17-inch aluminum-alloy wheels and halogen headlights. The roof spoiler helps the Crosstrek look more athletic, as do the black raised roof rails. This entry-level trim has the basics, such as cloth seats and a manually adjustable front seat. It does get to have cruise control, automatic climate control, and a 6.5-inch touchscreen with smartphone compatibility.

Some of the key upgrades found on the Premium have to do with technology. This trim has Wi-Fi capability and SiriusXM Satellite Radio, along with six speakers instead of just four. It provides two USB ports instead of the single one that's included with the base trim. The heated front seats and leather-wrapped steering wheel are nice to have, and the rear cargo cover is convenient for keeping things private.

The Sport trim is notable because of its dark gray wheels and the gunmetal finish on its side mirrors and front grille. Its seats are trimmed in StarTex, which is a water-repellant material, and they have yellow contrast stitching. It also has advanced keyless entry and a pair of USB ports for the rear-seat passengers to use.

One of the biggest upgrades associated with moving to the Sport is that it has the standard EyeSight Driver Assist Technology package. This safety suite includes a number of advanced mechanisms that can sense potential issues and can help drivers avoid problematic situations. These EyeSight features are available on the lower trims, but they're not standard, unfortunately.

With its eight-inch touchscreen and leather upholstery, the Limited stands out as a much more sophisticated Crosstrek. It comes with a power-adjustable driver's seat and LED steering responsive headlights, and it rides on 18-inch wheels.

The Hybrid has a lot in common with the Limited. It has the same technology as the Limited does, and like the Limited, it's equipped with blind-spot monitoring, rear cross-traffic alert, and reverse automatic braking. It, too, has leather seats, but its seats have blue contrast stitching.

Just keep in mind that the Hybrid is about $7,000 more expensive than the Limited is. This is a huge price jump that accounts for the hybrid equipment incorporated into the model.

The Subaru Crosstrek has just enough power to be able to attract many customers. Its poised to win people over with its technology and available safety systems, and its reasonable price helps it stand out as a smart choice.

Note: All Subaru Crosstrek MSRP, invoice and dealer cost dollar figures above are subject to change without notice.