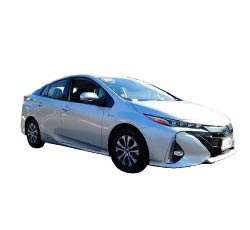 The 2019 Toyota Mirai is an example of what the future of automobile transportation has in store. It's one of only a few commercially available hydrogen fuel cell vehicles on the market. With its impressive fuel economy and lack of harmful emissions, it's ideal for the environmentally conscious driver.

The Mirai is a relatively new car, having only debuted in 2014. Most of the original design and technology remains. However, Toyota has introduced some additional safety features for the new 2019 model. Every Mirai now comes with Toyota Safety Sense.

The Toyota Safety Sense package includes a number of high-tech features that are designed to keep drivers safe and alert on the road. Various cameras and sensors are at the core of these systems. They monitor the road ahead and can provide automatic alerts if any potential issues come up.

The 2019 Toyota Mirai now includes a Pre-Collision System, a Lane Departure Alert system, Automatic High Beams, Dynamic Cruise Control, and Road Sign Assist. Some of these features may also activate autonomous activity from the Mirai. For example, the Pre-Collision System can bring the vehicle to a stop if the driver doesn't respond to alerts in time.

One glance at the 2019 Toyota Mirai and onlookers will know that the vehicle is not like others on the road. It has a noticeably modern aesthetic, further cementing its high-tech roots. The exterior is covered in aerodynamic lines and curves. They help to give the car a wind-swept look while reducing drag.

The front of the Mirai features a large, three-piece grille. It stretches across the entire hood. The vertical slats complement the overall design of the vehicle while cleverly hiding safety technology. Angular headlights are installed above the grille. LED lights are used throughout, even on the vertical daytime running lights that frame out the front-end.

The beautiful design of the Mirai doesn't stop with the exterior. The cabin is filled with innovative technology and comfortable amenities. The seats are covered in plush SofTex material. Both the front passenger and driver's seats have an eight-point power adjustment system.

All of the seats, including the rear bench, feature a two-stage built-in heating system as well.

When it comes to technology, the 2019 Toyota Mirai does not disappoint. The first thing drivers will notice when they step behind the driver's seat is the unique cockpit configuration. Instead of standard analog gauges installed directly in front of the steering wheel, the Mirai has a fully digital system in the center of the dash.

This unique arrangement provides a larger view of the road ahead. There are three distinct pieces of equipment. They include the Multi-Information driver display, the infotainment center, and the Intelligent Touch controls.

The driver's display is installed horizontally on the center dash. It features a wide TFT display. The screen can be customized with the steering wheel controls to display different performance metrics. These include speed, power levels, trip information, and much more.

The infotainment system is located directly beneath the driver display. It utilizes an intuitive 7-inch touch screen display and the Entune 3.0 software. A collection of useful applications, such as dynamic navigation and satellite radio, are already installed.

Below the infotainment system is the Intelligent Touch Controls. It allows drivers to make quick adjustments to the climate control and audio system. Additional interior features of the new Mirai include a Qi-compatible wireless charging pad, a premium JBL audio system, and multiple USB charging ports.

How the Mirai's Power System Works

The thing that sets the 2019 Toyota Mirai apart from other vehicles on the road is its innovative power system. Rather than using standard gasoline fuel, the Mirai generates electricity with hydrogen and fuel cells.

The hydrogen is stored in durable fuel tanks that are reinforced with carbon fiber. The hydrogen fuel travels to the fuel cell stack. The Mirai has 370 cells in total. There, the hydrogen interacts with air coming in through the wide grille on the front of the vehicle.

When hydrogen and oxygen interact, electricity is produced. The electricity is then used to power the motor, which drives the Mirai forward. The only byproduct of this power system is water. The clean water is expelled through the tailpipe, making the Mirai a zero-emission vehicle.

Just because the Mirai is good for the environment doesn't mean that it skimps on performance. The electric motor can provide you with up to 151 horsepower and 247 pound-foot of torque. MacPherson struts on the front wheels and a torsion beam on the rear wheels ensures that rides in the Mirai are smooth and enjoyable.

When it comes to efficiency, the 2019 Toyota Mirai offers impressive fuel economy. It has an EPA-estimated fuel rating of 67 MPGe, regardless of whether it's driving on busy city streets or the open highway. With a full tank, the Mirai can provide a range of 312 miles.

All in all the 2019 Toyota Mirai is an excellent option for drivers who want something different. The innovative vehicle is one of the first of its kind. It's a gorgeous car that can help drivers reduce their overall carbon footprint without sacrificing performance, comfort, or technology.

How to Calculate The Dealer Cost of a Toyota Mirai

Note: All Toyota Mirai MSRP, invoice and dealer cost dollar figures above are approximate amounts. Prices are subject to change without notice.