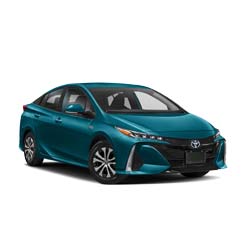 The Prius has made its mark on the industry as one of the first hybrids to become widely available and quite successful. With the 2021 Toyota Prius Prime, the hybrid system is modified slightly. The Prius Prime uses a plug-in hybrid powertrain. Its tank can still be filled up at the gas station, and its battery can be recharged by plugging it into an outlet. This car has many high-tech components as part of its safety and infotainment packages, and it should definitely be intriguing to forward-thinking consumers.

Toyota has enhanced the Prius Prime's safety package for this model year. The car can now recognize road signs and do a good job of detecting pedestrians and bicyclists in its path. Notably, Android Auto is finally a part of the infotainment system. One last change is that the Blizzard Pearl White exterior paint color has been replaced with the somewhat similar Wind Chill Pearl.

There are three trims to consider with the new Prius Prime. The LE is the entry-level trim, and it's followed fairly closely but the XLE. Less than $2,000 separates the two. At the top of the lineup, the Limited has the most refined elements.

Many modern features have been built into the LE to help it attract attention. It has a full array of driver-assist technologies and a seven-inch touchscreen. It also has quad-LED projector headlights that look pretty futuristic. A Smart Key System and push-button start can both be very convenient.

The most significant upgrades in the XLE are its wireless charging, SofTex seats, and 11.6-inch touchscreen. Style and technology are taken to new levels in the Limited. It has LED accent lights and LED fog lights, and it's the only trim to have blind spot monitoring, parking assist, and a head-up display.

The hybrid powertrain in the Prius Prime comes with a net horsepower of 121. The car uses an electric motor as well as a 1.8-liter engine. This engine has four cylinders and uses variable valve timing. It's been paired with a front-wheel drivetrain and an electronically controlled continuously variable transmission.

In hybrid mode, the Prius Prime lives up to high expectations, as it can earn up to 55 miles per gallon. When taking the electronic power component into account, the estimated MPGe on the Prius Prime is 133.

Drivers have the ability to choose EV mode when driving. This means that they will only be relying on electric power. They could travel up to 25 miles in this mode. While it's not a particular high range, it's still sufficient for most daily trips.

To charge the battery, the car can be plugged in to either a regular outlet or a 240V outlet. With the regular outlet, charging time is about five and a half hours. This time can be cut by more than half by using the faster 240-volt system. While the car doesn't necessarily have to be charged on a regular basis, it can be smart to do so because this would optimize overall efficiency.

The Prius Prime has a good amount of interior space thanks to its hatchback design. There's about 20 cubic feet of storage space behind the rear seats, and those rear seats can be folded down to create even more room.

Heated front seats are standard in the Prius Prime. In the base model, there are fabric seats, and in the others, there are SofTex seats. On the top-level trim, the cabin is spruced up with a heated steering wheel and auto-dimming rearview mirror.

As mentioned previously, the LE has a seven-inch touchscreen while the others have 11.6-inch touchscreens. Across all trims, there is smartphone compatibility as well as Amazon Alexa, SiriusXM Satellite Radio, and Bluetooth. What's really great is that integrated navigation is a standard part of the package on both the XLE and Limited trims. Having navigation can be so useful when looking for a new place and/or trying to avoid traffic.

The sound system is enhanced on the Limited trim. This trim benefits from having a JBL premium system with ten speakers and an amplifier.

Every Toyota Prius Prime comes equipped with several monitoring and mitigation systems that are part of the Toyota Safety Sense 2.0 package. The pre-collision warning system can alert drivers when it seems like they're about to involved in a frontal collision, and it can apply pressure to the brakes in an effort to stop the accident from occurring. Drivers will also be warned if they're veering out of their lanes, and the Prius Prime can correct steering in an effort to keep itself centered. Other standard components are automatic high beams, adaptive cruise control, and road sign recognition.

The Limited is further enhanced with a color head-up display. This piece of technology displays information unobtrusively on the windshield, right in the driver's line of sight. It makes it much easier for people to stay aware of their speed, navigation instructions, battery charge, and any alerts.

The Limited has a few other exclusive features. One is something called Intelligent Clearance Sonar, which can be useful when parking. Two others are blind spot monitoring and rear cross-traffic alert. It can be nice to have an extra pair of eyes when driving around other vehicles.

How to Calculate The Dealer Cost of a Toyota Prius Prime

Note: All Toyota Prius Prime MSRP, invoice and dealer cost dollar figures above are approximate amounts. Prices are subject to change without notice.