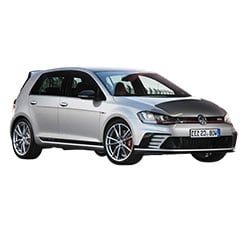 All you'll need is one drive in the 2019 Volkswagen Golf GTI to feel convinced that it's still the iconic hatchback from the 80s. Of course, it's had upgrades since then, including an always user-friendly interior, all for an affordable price.

This year's GTI builds on the primary Golf platform, applying a more powerful engine, and a seven-speed dual-clutch auto. You'll also have access to several sporty options, like sports seats and 18-inch wheels.

Volkswagen pushed its driver assistance systems further along the trim ladder, but bigger brakes are available this year, as well as a mechanical limited-slip differential for every GTI.

The 2019 Volkswagen Golf GTI is part of the seventh generation, which was first released in 2015. This year, the engine ekes up to 228 hp, and the seven-speed transmission replaces the old six-speed.

The brakes get an upgrade, and the limited-slip differential is on all trim levels. Speaking of trim levels, there's now the Rabbit tier.

A four-door hatchback, the 2019 Volkswagen Golf GTI can seat five passengers. Every model comes with front-wheel drive and houses a four-cylinder 2.0-liter engine capable of generating 228 hp, 258 lb-ft of torque. You'll also have the option of either getting a six-speed manual or a seven-speed dual-clutch auto.

Usually, the GTI might is best at the most basic level. This year, however, the limited-edition Rabbit trim is the most appealing one. It's between the S and the SE trims on the ladder, but it has a roof spoiler, gloss black wheels, and adaptive LED headlights. Not only that, but it has a few popping color options not found on the other trims.

In all, there are four 2019 Volkswagen Golf GTI trim levels to pick: S, Rabbit, SE, and Autobahn. For a base model, the S has plenty of proper equipment, though it does lack some modern conveniences. The Rabbit helps bridge the gap between the base and the pricier SE model, and it comes with exclusive colors. The SE has more comforts, and the Autobahn has more luxuries.

Some of the base S trim's most helpful features include all-season tires on 18-inch alloy wheels, heated mirrors, LED foglights, and the aforementioned limited-slip differential. It comes with standard technology features as well, like Bluetooth, a six-speaker sound system, and a rearview camera. Unlike some competitors, the S comes with Apple CarPlay and Android Auto integration. Finally, for safety, you'll find blind-spot monitoring, rear cross-traffic alert, and forward collision warning with the Driver Assistance package.

The new Rabbit comes with the features found on the S trim, but with unique color choices for the exterior. It also comes with adaptive LED headlights, mirror caps, a black spoiler, and black 18-inch wheels. Finally, the limited-edition Rabbit trim comes with the contents of the Driver Assistance package along with push-button ignition and Rabbit badging.

Heading up the ladder to the SE trim rewards you with a little luxury with leather seats and a sunroof, but the real reason to upgrade is the convenience features. The convenience feature that stands out the most is the VW Car-Net Security and Service system. Finally, you'll have the option to add the Experience package for an improved sound system and adaptive suspension dampers.

The highest tier is the 2019 Volkswagen Golf GTI Autobahn trim, which comes with a Fender sound system and the adaptive suspension, along with dual-zone climate control and a power-adjustable driver seat. More safety features are available too, which include front and rear parking sensors, lane-keeping assist, a self-parking system, and adaptive cruise control.

The 2019 Volkswagen Golf GTI has excellent performance for its cost, but the all-season tires hinder its abilities. As long as you're not trying to squeeze out every last horse, the GTI feels appreciable for the daily driver.

Though the max torque is only 1,500 rpm, it takes a few tics before the turbo starts. Once you're at that boost point, though, the GTI starts to feel as quick as you'd expect. The numbers do paint a slightly different picture, though. It takes 6.8 seconds to reach 60 miles per hour, which isn't the fastest for the segment.

The brake pedals don't resist very much, but they don't feel grabby either. Ultimately, the brake performance isn't the most encouraging. It takes over 130 feet to come to a complete stop from 60 miles per hour, which is quite long for the segment. The all-season tires are likely to blame here. In fact, it's worth getting different tires altogether if you otherwise love the GTI.

Most modes allow for light steering effort, easily firming up but without the driver feeling a loss of control. As speed increases, so too does the effort required.

At moderate speeds, the Volkswagen swerves around all corners with ease. If you take the edge too quickly, though, then you'll notice the limits of front-wheel drive. Again, the all-season tires increase the problem, so opt for summer tires.

How to Calculate The Dealer Cost of a Volkswagen Golf GTI:

Note: All Volkswagen Golf GTI MSRP, invoice and dealer cost dollar figures above are approximate amounts. Prices are subject to change without notice.