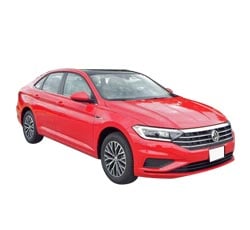 The Jetta has been defining what a sporty little sedan can offer for decades. With its impressive fuel efficiency, this is a vehicle that works great as a daily commuter. Despite not seeing many changes this year, the 2021 Volkswagen Jetta remains a smart buy for a variety of drivers.

A few changes are worth paying attention to with the 2021 Jetta. The entry-level S model now has a new two-tone 16-inch wheel option for buyers to look at. Those who choose the SE trim will find it now gives the front passenger six-way power-adjustment for their seat. Finally, the SEL gets updated to Volkswagen's MIB3 infotainment system.

With either engine, entry-level models are given a six-speed manual transmission. The standard Jetta can be upgraded to an eight-speed automatic, while GLI models offer a dual-clutch seven-speed instead. All models come with front-wheel drive.

A standard Jetta with the turbo 1.4L engine provides hard-to-beat fuel economy. Drivers can expect 30mpg in the city and 40mpg on the highway. This is true with either of the available transmissions. The Jetta GLI cannot quite match these numbers but still provides an impressive 25mpg city and 33mpg highway with the manual. Pairing the more powerful engine with the automatic transmission drops the Jetta down to 32mpg highway.

The handsome design of the Jetta is standing up to the test of time well. This is a traditional and somewhat boxy sedan but manages to look modern at the same time. Buyers who are after something that stands out a bit more should go with the R-Line trim level, which boasts black caps for its side mirrors and an exclusive design for its grille and bumpers.

For its standard infotainment system, the 2021 Jetta comes with similar equipment to the rest of the class. It offers a 6.5-inch touchscreen, Apple CarPlay, Android Auto, and a Wi-Fi hotspot. There are also two USB ports and Bluetooth to help with connectivity.

The available tech features are a bit more impressive. Things like an 8-inch touchscreen, wireless device charging, and a 10.25-inch digital instrument cluster are on the menu. Buyers can also find the increasingly popular wireless versions of Android Auto and Apple CarPlay. An eight-speaker sound system from BeatsAudio is available, as well as HD and satellite radio to enjoy on it.

The only standard driver aid found on the 2021 Jetta is a rearview camera. Still, the sedan managed to get a score of five out of five from the National Highway Traffic Safety Administration overall. Frontal crash testing received five stars, while side crash and rollover testing saw the Jetta receiving four stars.

Of course, drivers who are set on advanced driver assistance tech can find a model of the Jetta that will satisfy. The SE model adds quite a bit, including blind-spot monitoring and forward-collision warning. Another step up the ladder to the SEL will add rain-sensing windshield wipers and automatic high beams equipped on the 2021 Jetta as well.

Despite being classified as a compact sedan, the Jetta offers enough interior space to be practical and comfortable. It would be difficult to find another vehicle in this class that has as much space for both the front and back rows. Plus, the trunk can hold up to 14.1 cubic feet of cargo, which is another impressive stat for the Jetta.

The S is the entry-level model of the 2021 Jetta. It offers a satisfying amount of technology features and not much else. Going up to the SE changes things dramatically, giving the Jetta heated front seats, dual-zone automatic climate control, power-adjustment for the driver's seat, and much more. The R-Line has those same features but a sportier interior and exterior appearance.

For the SEL, the Jetta gains an auto-dimming rearview mirror, ambient interior lighting, a heated steering wheel, heated rear seats, and most of the available tech upgrades. The SEL Premium finishes things off with things like leather upholstery, navigation, and front sport seats. It also gives the driver's seat memory settings.

The GLI models are available in only two trims, the S and Autobahn. The GLI S has more standard equipment than the regular S trim, including some standard driver aids. The Autobahn is equipped similarly to the SEL Premium and throws in an adaptive suspension.

Note: All Volkswagen Jetta Sedan MSRP, invoice and dealer cost dollar figures above are approximate amounts. Prices are subject to change without notice.