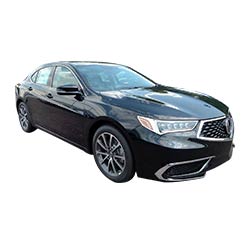 Find Out How Much to Lease a Acura ILX Below

Nothing significant has been changed when moving from the 2020 to the 2021 model year of the Acura ILX.

Acura refers to its base model as the Standard. This trim has the same type of powertrain as the others, and it has several driver-assist technologies that can come in handy more than people might think they would. In terms of keeping people entertained, it has a six-speaker sound system, Bluetooth, and Pandora capability. Some of its more impressive features are its power moonroof, Jewel Eye LED headlights, and heating elements built into the side mirrors. The leatherette seats are comfortable and supportive, and both front seats are heated, though only the driver's seat is power-adjustable.

The Premium Package is one level above the Standard, and it comes with some significant upgrades. Many people will be interested in this model because of its Apple CarPlay and Android Auto integration. It has SiriusXM Satellite Radio as well. Rather than having a five-inch screen like the Standard, it has an eight-inch one. Other upgrades that customers will likely pay attention to are the perforated Milano leather seats, a nicer sound system, and blind spot monitoring.

Next in the lineup is the A-Spec Package. There are two tiers to this trim; it can either be the "A-Spec with Premium Package" or the "A-Spec with Technology Package." Either way, the trim would have 18-inch wheels, a decklid spoiler, and LED fog lights. Some of the sporty interior elements are stainless steel pedals and a red instrument panel. The A-Spec with Technology Package lives up to its name since it has integration navigation, a ten-speaker sound system, and the ability to provide drivers with live traffic updates.

If anyone prefers to have navigation as part of the infotainment package on his/her new car, then the only one to pick would be the top-level trim. However, the other trims do have their own advantages, even if they don't have all of the advanced technology.

The A-Spec with Premium Package is attractive because of its more aggressive stylings. That being said, some people might not feel that it would be worth it to pay the extra money for this trim.

If a customer is more interested in getting the most value, the Premium Package would be the recommended choice. It has the smartphone compatibility that's becoming so common these days, and it has a great safety package and many high-end components. Relatively affordable pricing helps this trim stand out in a crowded market.

Given all the recent improvements in the automatic industry, it might be surprising to some that the Standard trim does not have smartphone integration. It does, though, have Bluetooth and can work with the Pandora program. The five-inch color screen can provide useful information about who might be calling, what's playing on the radio, and what the temperature is.

On all of the other trims, there's an eight-inch touchscreen in addition to Apple CarPlay and Android Auto. SiriusXM provides people with dozens of radio stations to select from, and the sound system has seven speakers. The Technology Package is enhanced with three extra speakers, and most notably, it has navigation.

This Acura sedan runs on a 2.4-liter engine. The engine gives this compact car some pep, as it can pump out 201 horsepower and 180 pound-feet of torque. To enhance the athletic nature of the ILX, the company has gone with an eight-speed dual-clutch transmission. A front-wheel drivetrain is the only type available.

Every ILX has been built with numerous safety components. The traction and stability enhancement systems can improve the quality of the ride, and Hill Start Assist can be useful when stopped on a sloping surface. Adaptive cruise control is standard, as are monitors and mitigation programs designed to keep people out of harm's way. Because of these programs, drivers of the ILX may ne less likely to be involved in frontal collisions and accidents that occur because they've drifted out of their lanes.

On the Premium Package and the higher trims, there is a blind spot monitoring system. This system can keep track of whether the turn signals are on so it can provide the most useful information to a driver. Plus, these trims have a rear cross traffic monitor. This can be important because it's sometimes impossible to see beyond a building, another parked car, or a different type of object when backing up.

The ILX is a compact car, and some people strongly prefer this type of vehicle versus any other. Leg room in the rear seat is 34 inches, but up front, the seats are much roomier. In a smart move, Acura has given the base model of the ILX leatherette seats and has put in a high-quality leather upholstery on the other trims. The driver's seat is a power-adjustable version, and the front seats are heated. Each ILX will have a smart entry feature as well as dual-zone climate control.

There are many more available features that can make the car feel more upscale. These include an automatic-dimming rearview mirror and a memory system for the driver's seat and side mirrors that can be set with two preferred positions.

Some other premium compact sedans that people may want to consider are the Audi A3, Genesis G70, BMW 2-Series, and the higher trims of the Honda Civic and Toyota Corolla.

Find the best Lease Deal on a Acura ILX:

Note: All Acura ILX lease prices and dollar figures above are approximate amounts. Prices are subject to change without notice.