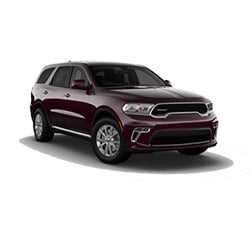 Find Out How Much to Lease a Dodge Durango Below

Dodge places a lot of hype into its marketing, and it certainly does so with the 2021 Dodge Durango. Does the Durango live up to the hype though?

We actually find ourselves agreeing with Dodge on this one. The Durango is basically, to paraphrase Dodge, the muscle car built for families. That isn't a phrase you'd expect to hear from many automakers, but there you have it. Dodge somehow managed to mesh the sportier elements of the Charger with the now-defunct Journey's body style. Somehow, it works.

And the 2021 line-up sees some remarkable changes, starting with the addition of the SRT Hellcat. This trim level packs a punch with its supercharged 6.2-L V8 engine, which was brought over from the widely popular Charger and Challenger models. This engine is capable of putting out a mind-blowing 710 hp and 645 lb-ft of torque. Apparently muscle SUVs are a thing now, and we wouldn't be surprised to see the Charger's new SRT Hellcat Redeye (which delivers an even more impressive 797 hp) hit the Durango in the near-future. That'd just be ridiculously cool.

For now, buyers should be satisfied by the SRT Hellcat as well as some standard revised styling elements inside the cabin and on the exterior. The outside looks much more athletic than the 2020 Durango. Inside, you get a more contemporary design with the bigger touchscreen display and wireless smartphone app connectivity via Apple CarPlay and Android Auto.

So, what should you expect from the new 2021 Dodge Durango? Let's check out its trim levels, tech specs, interior design, driving performance, and safety and reliability ratings. Before we leave you to your decision, we will list a few worthy alternatives if you aren't feeling it with the Durango.

Now that the awe-inspiring SRT Hellcat is here, the 2021 Dodge Durango line-up consists of six trim levels: the SXT, GT, R/T, Citadel, SRT 392, and now-line-topping SRT Hellcat. The SXT is a five-seater that starts you off with a 3.6-L V6 engine that's good for 295 hp and 260 lb-ft of torque and comes with an 8-speed automatic transmission. It rides atop 18-inch wheels and comes with LED foglights and headlights, a load-leveling suspension on the RWD variant, tri-zone automatic climate control, USB-A and USB-C ports, smartphone app integration, an 8.4-inch touchscreen display, push-button start on the keyless entry system, and a six-speaker sound system.

Options include third row seating, the Trailer Tow Group IV (which has a Class IV hitch receiver), and SXT PLus (which gives you roof rails with crossbars, a power-adjustable driver's seat, and parking sensors).

The GT is a seven-seater third-row style with black window trim and a big black grille. It also has 20-inch wheels, parking sensors for the rear, and driver's seat power adjustments. Options include a blind-spot monitoring system, GT Plus (which has remote start and a power liftgate), Premium Group I (including a 10.1-inch touchscreen and nine-speaker sound system with a subwoofer), Premium Group II (which adds a wireless phone charger and high beams that are automatic), and the Technology Group (forward collision mitigation, automatic emergency braking, adaptive cruise control, lane departure warning, and windshield wipers that can detect rain).

Next up, the R/T builds off the GT Plus but opts for a 5.7-liter V8 engine that gets 360 hp and 390 lb-ft of torque. Features include everything from Premium Groups I and II, a power-adjustable front passenger's seat, and 20-inch wheels.

The Citadel has the V6 as standard but lets you opt for the 5.7-L V8. Features from Trailer Tow Group IV and Technology Group are equipped, as well as chrome trim on the exterior. A sunroof comes standard, and the second-row captain's chairs means you can seat six. The leather upholstery gets upgraded, and the front seats gain ventilation. You also get a blind-spot monitor.

The standard SRT trim equips a 6.4-L V8 engine that generates 475 hp and 470 lb-ft. The new SRT Hellcat, of course, bests that with the 710-hp V8. They both build on the R/T and only have a few stylistic differences. They each add features like an adaptive suspension, Brembo brakes, and upgraded leather on the sport seats.

Remaining options include a 19-speaker Harman Kardon audio system and the Blacktop package, which equips the Durango with blacked-out exterior trim and black-painted wheels.

Unless you can afford the new SRT Hellcat, go for the R/T with the Technology Group equipped. This gives you enough of the features that you need with an engine that is plenty powerful. It also leaves some room for fuel efficiency, even though we suspect that isn't why you're considering buying this vehicle.

Technology on the Durango might come off as slightly dated, but for the most part, it is user-friendly. The Uconnect 4C interface you'll find on the 8.4-inch display is straightforward, but the new 10.1-inch screen is worth the upgrade. Charging ports are everywhere, so passengers won't go without. The Technology Group feels somewhat essential since it adds on a lot of helpful driver aids.

How many massive SUVs can get to 60 mph in under 5 seconds? Not many, but the Durango is one of them. The SRT's engine will get you there in 4.9 seconds. Speedy, yes, but also well-behaved in everyday driving scenarios. The transmission shifts with ease, and despite its size, steering and handling aren't exhausting for the driver.

NHTSA has yet to give it a full score, but everything it has tested checks out with high marks. The rollover risk is segment-standard. Overall, the Durango should prove to be reliable despite a few buyers reporting individual issues with it. Opting for the Technology Group really boosts safety measures while driving.

The interior is spacious, but the roof pillars are thick and tend to obstruct the view fore and aft. Everything is simple, even getting into the third row, which is less cramped than others in this segment. The seats are well-padded, and the climate control system affords a ton of comfort.

Want to test-drive a few similar vehicles? Try the Kia Telluride. It gets high marks for space, comfort, and standard tech features. Its engine just can't compete with those on the Durango. The Chevrolet Traverse is another solid option with its massive amount of cargo and passenger space. Unfortunately, though, it lacks the pizzazz that makes the Durango so much fun to drive.

Find the best Lease Deal on a Dodge Durango:

Note: All Dodge Durango lease prices and dollar figures above are approximate amounts. Prices are subject to change without notice.