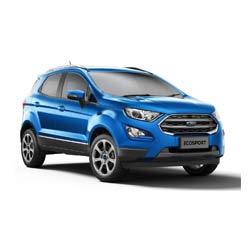 Find Out How Much to Lease a Ford EcoSport Below

The Ford EcoSport is still in its first generation, which made its debut in 2018. Minor changes have been made for this year, including the addition of power-adjustment for the driver's seat in the Titanium and SES 4WD models. Otherwise, buyers will find minor tweaks to the exterior appearance of the 2021 Ford EcoSport when comparing it to the 2020 model.

Each of the four trim levels of the 2021 EcoSport has a few enticing features standard, such as a Wi-Fi hotspot and two USB ports. Beyond that, the entry-level S trim is relatively barebones, coming with a 4.2-inch display, the original SYNC system, and cloth upholstery.

The SE trim is considerably better when looking at tech, as it goes up to an 8-inch touchscreen and adds Apple CarPlay and Android Auto. Drivers will find the cabin is much more luxurious here as well, with heated front seats and a leather-wrapped steering wheel. Fog lights and a moonroof join the standard equipment list also.

For its Titanium model, the 2021 EcoSport has leather-trimmed upholstery, a 10-speaker premium audio system, HD radio, and the new power-adjustable driver' seat. The top trim, known as the SES 4WD, gets a more powerful engine. Feature-wise, it adds navigation, a heated steering wheel, ambient lighting, and rain-sensing windshield wipers.

The S trim simply does not have the tech and safety features drivers are looking for today. While the engine of the SES 4WD may be tempting to some, it really does not make that much of a difference in the performance of the EcoSport. Unless drivers have their hearts set on little luxury touches, the SE model is the way to go. It is significantly better than the S and quite a bit cheaper than the Titanium model.

In its base model, the 2021 EcoSport gives drivers Bluetooth and a small display. Android Auto and Apple CarPlay, along with an 8-inch touchscreen, join the standard equipment list at the SE level. This model and higher also get satellite radio. For HD radio and a premium sound system, buyers will want to look at the Titanium and SES 4WD models.

Most models of the 2021 EcoSport are using a turbocharged three-cylinder engine to get around town. It creates just 123-horsepower but does an adequate job of moving around at lower speeds. Highway driving is more of a struggle. A 2.0L four-cylinder engine is also available. It generates 166-horsepower, which does a bit better at highway speeds. Both pair with a six-speed automatic transmission.

Despite its lack of power, the EcoSport offers up impressive towing numbers for its vehicle class. The larger 2.0L engine can bring along up to 2,000 pounds. Even the three-cylinder can tow up to 1,400 pounds when underneath the hood of a properly equipped EcoSport.

The EcoSport is great for busy streets and tight parking situations due to its smaller size. Ride quality is somewhat lacking, with most bumps in the road making their way to the cabin. The amount of noise that makes its way inside is also a bit annoying.

Overall, the 2021 EcoSport got a score of four out of five stars from the National Highway Traffic Safety Administration. In side-crash testing, it managed to get five stars. It received four stars in frontal crash testing. As for its rollover score, it depends on the engine. Models with the four-cylinder got four stars, while models with the three-cylinder got on three stars.

The only standard driver aid found in the 2021 EcoSport is a rearview camera. Available features are things like blind-spot monitoring, rear cross-traffic alert, and rear parking sensors. Popular features found on other SUVs, such as adaptive cruise control and automatic emergency braking, are not available for the EcoSport in 2021.

J.D. Power has not given the 2021 model of the EcoSport a predicted reliability score yet. Similar models from previous years were given a score of 3.5 out of five, which is slightly above average.

Like many two-row SUVs, the EcoSport can technically seat five. When it comes to average-sized adults, however, buyers will find that only four can sit comfortably. The seats are relatively comfortable, but the thick roof pillars negatively impact visibility. For its price, the EcoSport provides nice cabin materials.

Cargo space is one area that the EcoSport shines. Behind the backseat, drivers get 20.9 cubic feet, which is a great number for the subcompact SUV class. The maximum capacity is 50 cubic feet. Buyers should note that the cargo door opens to the side rather than up.

The Hyundai Kona is a similarly sized SUV. It has more power, more standard technology, and more driver assistance features. Believe it or not, it is also more fuel-efficient, despite the added horsepower.

Another option is the Kia Soul. This vehicle also is more powerful and fuel-efficient. It also comes standard with smartphone integration, a 7-inch touchscreen, and more spacious seating. Buyers may also want to look at the Chevrolet Trax, Toyota CH-R, Nissan Kicks, or Honda HR-V.

Find the best Lease Deal on a Ford EcoSport

Note: All Ford EcoSport lease prices and dollar figures above are approximate amounts. Prices are subject to change without notice.