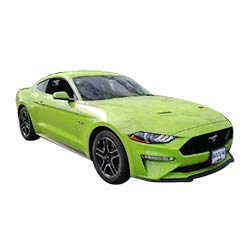 Find New Car Deals Near You

Find Out How Much to Lease a Ford Mustang Below

Few muscle cars in history can rival the Mustang’s popularity. Drivers love this car’s blistering acceleration and much-improved road handling. A long list of creature comforts also make it great for commuting. Both two-door coupe and convertible body styles are offered. Let’s take a look at some common questions prospective buyers have about the 2021 Ford Mustang.

For 2021, Ford has brought back the limited-edition Mach 1 model. A Co-Pilot 360 advanced safety package also now comes standard throughout the lineup. Discontinued Mustang models include the Bullitt, Shelby GT350, and Shelby GT350R,

Even the base Mustang EcoBoost proves to be a rewarding choice. Its turbocharged four-cylinder engine generates a pleasing 310 horsepower. This engine can be paired to either a six-speed manual or 10-speed automatic transmission. The entry-level EcoBoost model’s exterior styling is enhanced by standard LED headlights and dual exhaust outlets. On the inside, you’ll find a built-in Wi-Fi hotspot and a voice-control technology.

The Mustang GT is made for drivers who desire the power and sound of a traditional V8 engine. It’s rated to develop a more exhilarating 460 horsepower. Along with the extra muscle comes a quad-outlet exhaust. While the GT Premium looks similar on the outside, its interior features heated/ventilated leather seats and dual-zone automatic climate control.

Before shopping for a new 2021 Ford Mustang, drivers should first take a good look at their budget. With a starting MSRP of less than $28,000, the base EcoBoost model proves to be a strong value. It also returns the lineup’s best fuel economy. Drivers who simply demand more luxury should go for the EcoBoost Premium model.

The V8-powered Mustang GT feels more like a traditional muscle car. However, prices start at just over $36,000. Expect the more upscale GT Premium model to tack on an additional $4,000. Drivers who desire a future collector’s item should consider the limited-production Mach 1 model. While the supercharged Mustang Shelby GT500 is an electrifying performer, it does demand nearly $74,000 before adding any options.

What Kind of Technology Does It Have?

Aside from the base model, all the other trims receive a modern Sync 3 infotainment system. Its touchscreen functions similar to an electronic tablet. Ford also allows buyers to replace the standard analog gauges with a customizable digital screen. Furthermore, all trims receive a built-in Track Apps feature.

Even the four-cylinder version of the Mustang can be quite entertaining to drive. Drivers can also look forward to getting at least 30 mpg on the highway. However, the Mustang GT is even quicker and more exciting to drive. Meanwhile, a tested 0-60 mph time of 3.6 seconds enables the Mustang Shelby GT500 to compete with some exotic sports cars.

All versions of the 2021 Ford Mustang offer poised handling. However, Ford offers some worthwhile performance packages. A few of the upgrades include a heavy-duty radiator, track-tuned springs, and beefier Brembo brakes. Remember, every new Mustang uses a rear-wheel drive system.

Last year, the Mustang received a five-star overall safety rating from the federal government. It ranks among the segment leaders in impact protection. Accident-avoidance features, such as blind-spot information and automatic emergency braking, now come standard. Owners can expect the Mustang to be more dependable than the average sports car. This is a big advantage for drivers who need a reliable ride.

The Mustang has a quiet, modern interior. Quality is very good for a non-luxury vehicle. While there’s a lot of legroom in the front, rear passengers have a limited amount of space. There’s also 13.5 cubic feet of cargo space in the trunk, which enables you to pack a few suitcases.

What Are the Alternatives to This Model?

Many people will naturally be comparing the 2021 Ford Mustang to the 2021 Chevrolet Camaro. While the Camaro does handle slightly better, its poor rear visibility and lower reliability rating should be factored into your decision. The Camaro also has a much smaller trunk.

Another big rival is the 2021 Dodge Challenger. Many people appreciate the Challenger’s retro styling and more spacious interior design. An available AWD system also makes the Challenger a better pick for drivers in snow-prone regions. However, it’s not as agile as the new Mustang.

When shopping for a new sports car, some driving enthusiasts will be looking at the new Subaru BRZ. While the BRZ is more nimble than the Mustang, it’s not nearly as quick. The V8-equipped Mustang also has a far meaner sound.

Find the best Lease Deal on a Ford Mustang

Note: All Ford Mustang lease prices and dollar figures above are approximate amounts. Prices are subject to change without notice.