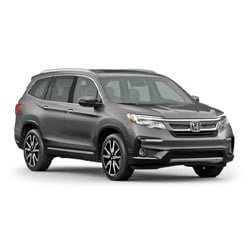 Find New Car Deals Near You

Find Out How Much to Lease a Honda Pilot Below

For 2021, Honda has changed the transmission on some of the trims. Previously, most models used a six-speed automatic transmission, but they now use a nine-speed version. This should improve how smoothly the vehicle can shift gears.

Other features that Honda has made standard on the Pilot are a two-zone climate system, paddle shifters on the steering wheel, and an automatic start/stop system, which improves efficiency by temporarily turning the engine off when the vehicle is stopped.

One other big update to the Pilot is related to its lineup. There is now a Special Edition trim. It has been placed in between the EX-L and Touring, and it has black roof rails, black wheels, and many high-tech features.

The 2021 Pilot comes in six trims. The base model is the LX, and it has an advanced safety system. It also has dual-zone climate control, air vents in the back, and push button start.

With the EX, the biggest additions are an eight-inch touchscreen, Apple CarPlay, and Android Auto. In this model, there is traction management to help the SUV handle difficult conditions. The smart entry system makes it easy to get in, and there's even a remote start function.

The EX-L is similar to the EX, but it has leather seats and a power moonroof. Its other premium features include a memory system for the driver's seat, a power-operated tailgate, and a rearview mirror that can automatically dim.

New for 2021, the Special Edition has improved technology in the form of wireless charging and a hands-free tailgate. It stands out with black wheels and roof rails.

Two trims that offer a lot are the Touring and Elite. They have navigation, LED headlights, heating in the front and second-row seats, and a special entertainment system. On the Elite, there's a panoramic roof as well as ventilation in the front seats.

The Elite and Touring are going to treat people to the most features, but their prices may make them unreasonable for some customers. If budget is a concern, then obviously the LX is going to be the one to pick. Its lack of technology may be a problem, though. The EX and EX-L are both great choices that are competitively priced while offering advanced technology and many high-end amenities.

Most trims have eight-inch touchscreens with smartphone connectivity. SiriusXM provides more entertainment options, and the available wireless charging is really convenient to use. The two higher trims have navigation and Wi-Fi capability, and a really cool feature that they have is a rear-seat entertainment system. It comes with a Blu-Ray player and a 10.2-inch screen, and people in the back will really appreciate this system.

Note that the base model is limited to having a five-inch touchscreen and Bluetooth.

Under the hood of the 2021 Honda Pilot, there's a highly capable V6 engine. It has a displacement of 3.5 liters, and it can generate 280 horsepower and 262 pound-feet of torque. The company has paired this engine with a nine-speed automatic transmission. Anyone who likes the idea of manually shifting can use the paddle shifters mounted on the steering wheel.

The Pilot can be equipped with either all-wheel or front-wheel drive. With all-wheel drive, the SUV isn't quite as efficient, but the benefit is improved traction. For many people, it's important to have that better traction, especially if they occasionally experience snowy and icy conditions. All-wheel drive comes with three modes - snow, sand, and mud - so that drivers can optimize performance in specific situations. With most of the front-wheel drive models, there is a snow mode that can be selected to enhance stability.

All of the Pilots are equipped with several driver-assist systems. These allow the vehicle to monitor how it's doing and take appropriate action if anything isn't right. For example, if it seems like the Honda is following the car in front of it too closely, the driver will be warned. If an accident is imminent, the Pilot can independently apply pressure to the brakes.

Other systems actively work to keep the Pilot centered in a lane. They can do so because they can "see" the lane markings and know when the vehicle is drifting to one side or the other.

Adaptive cruise control, a rearview camera, and automatic high beams are some other standard features. Most of the trims have additional monitoring systems that watch out for vehicles in blind spots and those that may be crossing behind the SUV when it's backing up.

For many people, having three rows of seats is essential. It's important to know that the third row in the Pilot only has about 32 inches of leg room. The second row is much more spacious, with more than 38 inches of leg room. In most trims, the second row has room for three people on its bench seat. In select models, the middle row has a pair of captain's chairs. This brings total seating accommodations down to seven, but it does give passengers more room to move around.

Behind the third row of seats, there is a cargo area that has a volume of about 17 cubic feet. Cargo capacity can be significantly increased by folding down that back row or by lowering all the rear seats down. There could be approximately 100 cubic feet of cargo capacity in this case.

Honda provides a range of options for the cabin materials and features. The SUV starts out with cloth seats and has multiple storage compartments. At the high end of the spectrum, trims could have leather upholstery, heated and ventilated front seats, and ambient lighting.

There are many models that are similar to the Pilot. They include the Toyota Highlander, Kia Telluride, Volkswagen Atlas, and Mazda CX-9.

Find the best Lease Deal on a Honda Pilot

Note: All Honda Pilot lease prices and dollar figures above are approximate amounts. Prices are subject to change without notice.

[an error occurred while processing this directive]