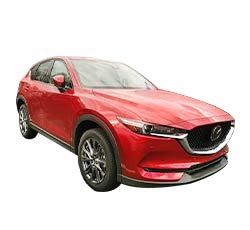 Find Out How Much to Lease a Mazda CX-5 Below

For the 2021 model year, the CX-5 has been changed in a few notable ways. To begin, its touchscreen has been gone from measuring seven inches to 10.3 inches, and smartphone compatibility is now standard. The Signature trim has benefited from getting a higher quality 360-degree camera and rear automatic braking, and there's a new trim. The Carbon Edition is bold and aggressive in style, with black exterior accents and red seats.

The Sport starts off the lineup with a large touchscreen, smartphone connectivity, and a comprehensive safety package. It has a lot of other nice features, like push button start and remote keyless entry. It seats are covered in black cloth upholstery, and it has manually adjustable front seats.

In the Touring, the driver can take advantage of a power-adjustable seat with lumbar support. The seats are upgraded with leatherette, and the front seats have three levels of heating. Its automatic climate system has two zones, and people in the back can have more air thanks to rear vents.

In the Carbon Edition, the overall feel is much more edgy. This trim is exclusively offered with a Polymetal Gray exterior paint and red leather seats. Some of the more high-end features in this trim are a rear power liftgate, 19-inch wheels, and a power moonroof. The Carbon Edition Turbo is very similar to the Carbon Edition, but it gets to have a more powerful turbo engine.

At the high end of the lineup are the Grand Touring, Grand Touring Reserve, and Signature. The Grand Touring is the only one out of these three to have the standard engine. Its adaptive front lights, LED fog lights, and SiriusXM should help it attract attention.

The Grand Touring Reserve can make things very comfortable with heated and ventilated front seats and a heated steering wheel. Its side mirrors have a cool feature where they can fold themselves in. However, it doesn't have quite as many advantages as the Signature. In the Signature, there's a genuine wood interior trim, and it has integrated navigation. Its seats are the most refined, as they're covered in Nappa leather.

The price difference between the first and last trim is about $10,000, so people have to think hard about how many amenities they want and what type of driving experience they prefer. For those who want the thrill of driving a turbo engine, then they'll want to select either the Carbon Edition Turbo, Grand Touring Reserve, or Signature. Out of these three, perhaps the Carbon Edition Turbo might be the most practical from a financial standpoint. The extra components found in the top two trims might not justify their added expense.

If people are satisfied with the standard engine, there are many solid options. The Sport really does have a lot to offer, so expect this trim to do well in the market. On the other hand, the Grand Touring will treat people to plenty of advanced technology and upscale materials.

All of the Mazda CX-5s have 10.25-inch touchscreens. These screens come with Apple CarPlay, Android Auto, and Bluetooth. At the very basic level, there's a four speaker system. The system gets upgraded to a six-speaker configuration on the Touring, and then all the rest have ten Bose speakers as part of their setup.

Rear dual USB charging ports are available, with front dual USB ports being standard. SiriusXM is found in the mid-level trims, and navigation has only been built into the Signature trim. Along with navigation, the Signature has SiriusXM Traffic and Travel Link to keep drivers updated about what's going on with the roads, the weather, and other important pieces of news.

The CX-5 has two available engines. The first one is a 187-horsepower version that has a displacement of 2.5 liters. It comes with 186 pound-feet of torque, and it can either have a front-wheel or all-wheel drivetrain.

The other engine has a turbocharger, though it's also a 2.5-liter engine with four cylinders. This turbo engine can generate up to 250 horsepower, and torque is equally impressive at up to 320 pound-feet. Like the standard engine, the turbo one is paired with a six-speed automatic transmission. There's a Sport Mode that will make things a little more exciting, and there's a manual shift mode in case people want to be more in control over performance.

Many people will be drawn to the CX-5 because of its standard safety features. Every model has the ability to hit the brakes if necessary to prevent a frontal collision, warn drivers about vehicles in their blind spots or those crossing behind them, and turn on its high beams when not very much light is detected. This Mazda can also spot pedestrians in its path and alert drivers to their presence; it can slow itself down if the driver doesn't respond appropriately. Further, it has lane keep assist so it can keep itself centered in a lane.

This vehicle feels upscale, even when looking at the base model, due to elements like leather on the gear shifter and steering wheel. Most trims have leather seats, with the exception of the base model and Touring, which have cloth and leatherette upholstery, respectively.

Leg room is fairly generous, even though this Mazda is far from being one of the largest SUVs available. Second-row passengers have almost 40 inches of leg room. In the back, there's about 30 cubic feet of space for storage. Cargo capacity can be doubled by folding down the rear seats. It's very easy to do so with the one-touch fold-down function.

Other small SUVs are the Nissan Rogue, Honda CR-V, Ford Escape, and Subaru Forester. The list is actually quite extensive given the popularity of this type of vehicle.

Find the best Lease Deal on a Mazda CX-5:

Note: All Mazda CX-5 lease prices and dollar figures above are approximate amounts. Prices are subject to change without notice.