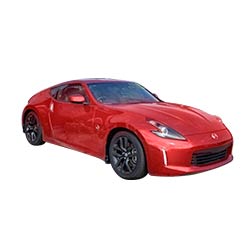 Find Out How Much to Lease a Nissan 370Z Below

Nissan probably isn't the first brand you would associate with a sports car, but the 2021 Nissan 370Z is designed to be just that. Unfortunately, the 370Z seems to be lost in time, stuck in a previous generation when cars were not loaded up on standard infotainment and safety features. Even many of today's base model economy vehicles have more features than the 370Z.

Nissan's answer to the problem of the 370Z is the 2021 400Z. Nissan has been pretty secretive about this vehicle, but what we do know is that it will debut as a hardtop coupe but could eventually come as a convertible as well . Ideally, it will resolve a lot of the qualms we have with the 2020 370Z. It will likely be powered by a twin-turbocharged 3.0-L V6 that could produce about 300 hp. The NISMO variant could even receive the 400-hp version found on the current Q60 Red Sport 400. And that is something we've got our fingers crossed for, as it would mark a vast improvement over the 370Z's uninspiring V6 .

While the 370Z gives the average buyer access to a sports car, it isn't as sporty as you might think. That's why we're going to go over what its trim levels offer, the technology that gets included, how the car performs, how safe and reliable it is known to be, and how it stacks up against top rivals... and against the new 400Z.

The Nissan 370Z is a two-seater hatchback coupe that is available in your choice of four trim levels: the base 370Z, Sport, Sport Touring, and NISMO. Each one is powered by a non-turbo 3.7-L V6 engine that is matched to either a 6-speed manual or 7-speed automatic transmission. This engine has a power output of 332 hp and 270 lb-ft of torque. The NISMO does get a boost up to 350 hp and 276 lb-ft of torque. There is also a 50th Anniversary Edition model based on the Sport trim that was exclusive to the 2020 line-up.

Going up to the NISMO gets you that more powerful engine, plus a few extras. This trim comes with a special sport-tuned suspension, Recaro sport seats, a racing clutch, upgraded tires, special brake hoses and fluids, a unique aerodynamic body kit, and a built-in navigation system.

Of course, there is the limited edition 50th Anniversary Edition. It is based on the Sport and adds special two-tone paint and graphics.

If we had to pick, the Sport trim level would be our choice. The tires have a better grip to them, plus you get better cornering abilities. You also get the SynchroRev Match feature, which is cool since it will automatically trigger the throttle when the transmission downshifts, ultimately leading to more efficient and smoother shifts between gears. But if you can get your hands on a 50th Anniversary Edition, it will give you some serious style points.

Technology is kind of sparse on the 370Z. The infotainment system that comes on the higher trim levels is vastly outdated. Paying $30,000 for a vehicle with barely any technology seems like a rip-off. The standard set-up with the CD player feels like something from ten years ago, and only getting phone-calling Bluetooth on the base trim feels like a cheap 'out' for Nissan. You have to go to the Sport Touring just to get a small 7-inch touchscreen with an infotainment system that isn't really that up-to-date.

The 370Z has an acceptable acceleration speed of 5.3 seconds when going from 0 to 60 mph. Initial grip is limited by the lack of a standard limited slip differential. Braking feels secure with a firm pedal that is easy to maneuver. They will get somewhat grabby in the cooler weather though. Steering feels lackluster with a numb, too-lightweight vibe. But it does at least seem to be accurate.

The IIHS and NHTSA have not tested and rated the 370Z. There aren't that many driver aids to make modern drivers feel secure. The rear-view camera is halfway decent, but you don't get a blind spot monitoring system or optional surround-view camera. The 400Z is slated to have more of these features. You will likely be able to opt for adaptive cruise control and lane departure warning, and automatic emergency braking with pedestrian detection will likely come standard.

The 370Z's interior is utterly basic. The steering wheel is tilt-only, so you don't get much adjustability. Elbow space is definitely narrow, but the cabin does have enough head and leg room for both occupants. The seats don't have much lumbar support, and even the fan gets loud when you set it at a higher speed. Controls aren't all appropriately placed either, with the climate controls positioned too low for the driver to comfortably reach.

The 2021 Nissan 400Z is going to be the 2020 370Z's biggest competitor. It will cost more but will have more features for the price. We also expect the driving performance to be less bland and a little more engaging. The new Toyota Supra is also a strong rival with its turbo 6-cylinder engine . It also has the sporty handling you should expect from a vehicle like this.

Find the best Lease Deal on a Nissan 370Z

Note: All Nissan 370Z lease prices and dollar figures above are approximate amounts. Prices are subject to change without notice.