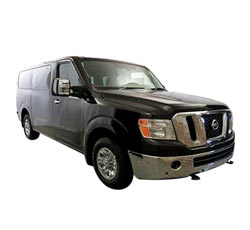 Find Out How Much to Lease a Nissan NV Below

About the Nissan NV Passenger:

One major change has been made for the 2021 model year. Navigation has become standard in the top two trims of the NV Passenger van. This is a component that is sure to be noticed by people familiar with the feeling of not knowing when the next turn is coming up. Navigation can be helpful on a daily basis since it can take real-time traffic conditions into account.

This 2021 passenger van comes in three trims. The S is the base model, and it runs on a 4.0-liter V6. It's able to accommodate 12 people, though there are hundreds of different seating configurations that it can be set up with. The fully boxed ladder frame gives this van strength and rigidity, and remote keyless entry and multiple storage compartments are included for convenience. With Bluetooth, the driver can make hands-free phone calls or stream audio, and the seven-inch touchscreen is a nice feature to have.

The mid-level trim is the SV. When people first see inside the cabin, they might be confused as to why the SV has a smaller touchscreen than the S does. While the SV's 5.8-inch touchscreen might be smaller than the one in the S, it has more features. They include smartphone compatibility, navigation, and SiriusXM. The SV feels more upscale than the S does, with carpeted floors, a center console in the front row, and chrome accents on the exterior.

At the top of the lineup, the SL has the most benefits. It's the only one to come standard with a more powerful V8 engine as well as towing equipment. Drivers will appreciate its auto-dimming rearview mirror and heated exterior mirrors. Heated and leather-appointed front seats add to the more elegant nature of this model.

If people are looking for vans that can get the job done, the S will appeal to them. As the most affordable trim, it might be the most practical one to purchase. It has all the size and functionality that customers may need.

However, if anyone wants a little extra, like navigation or smartphone connectivity, the SV should be considered. These high-tech features can definitely be worth it, especially if they'll be used on a regular basis. Plus, passengers will appreciate the additional lighting and storage compartments in the SV.

For those who want to impress people, the SL would be the right choice. Leather seats and a more capable engine can both be appreciated. The SL is also appropriate for those who need to tow heavy loads with their vans, as it has all the proper equipment.

It's really great that Nissan decided to put navigation into the SV and SL trims. This gives drivers a safe way to find new destinations; they may have multiple drop-off or pick-up points for their passengers. The two top trims also have voice recognition, hands-free messaging, and a CD player. SiriusXM Radio provides more entertainment choices, and the 5.8-inch touchscreen has NissanConnect technology so that it can be compatible with smartphones.

There may not be as many features on the base model, but the S trim still has a USB port and Bluetooth. Through its seven-inch touchscreen, people can make adjustments to music playback and access a few other menus.

Under the hoods of the S and SV, there are 4.0-liter V6 engines. These engines give the Nissan NV van 261 horsepower and 281 pound-feet of torque. These impressive numbers indicate that this van can handle itself well, even when loaded down with passengers and their cargo.

The SL trim gets to run on a 5.6-liter V8 engine. With this larger engine, horsepower is increased to 375 and torque is bumped up to 387 pound-feet. This engine, as well as the V6, comes with an electronic drive-by-wire throttle and a rear-wheel drivetrain. The V8 uses a seven-speed automatic transmission. In contrast, the V6 uses a five-speed automatic transmission.

With its greater strength, the SL is rated to tow up to 8,700 pounds when equipped with a tow hitch receiver. With standard bumper towing, it can tow 2,000 pounds, like the S and SV can.

Considering all the people that may be riding in the NV van, it was important to Nissan to put in a number of safety components. Up front, there are multiple air bags. There are side-impact airbags for all outboard passengers as well. The LATCH system can make it easier to securely hook up car seats. Giving the van more durability are pipe-style steel guard beams in both sides, and front and rear crumple zones can absorb some energy in case of an impact.

Every 2021 Nissan NV passenger van comes with cruise control to lessen driver fatigue on long trims. Every trim also has traction control and a rearview monitor. The SV has a rear sonar system that can help with parking, and in the SL, there are sonar systems in both the front and back.

The cavernous cabin can accommodate up to 12 people. The rear seats can be taken out if there needs to be more space for cargo. The front passenger's seat can fold down, too, and its seatback can double as a tray table.

In the first two trims, there are gray cloth seats, and these are upgraded to leather seats in the SL. The SL has a few other amenities, such as a leather-wrapped steering wheel, two-zone climate control, and heating elements in the front seats. In the SV and SL, there is a power-adjustable driver's seat with a storage pocket built into its seatback.

Several companies make full-size passenger vans that may compete with the Nissan NV for attention. Some alternatives to Nissan's passenger van are the Ford Transit, GMC Savana, Mercedes-Benz Sprinter, and Ram ProMaster.

Find the best Lease Deal on a Nissan NV

Note: All Nissan NV lease prices and dollar figures above are approximate amounts. Prices are subject to change without notice.