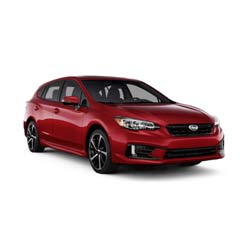 Find Out How Much to Lease a Subaru WRX Below

These services will offer you the lowest prices and supply you with multiple competing price quotes. You will know the best price before you visit the dealer.
Subaru Lease Guides::
• Subaru Ascent Lease
• Subaru Crosstrek Lease
• Subaru Forester Lease
• Subaru Impreza Lease

Since its debut as a stand-alone Subaru model in 2014, the WRX has developed something of a cult following among drivers who value their vehicle's performance characteristics above all else. It is one of those cars that motorists love or hate, with few people having a mixed appraisal of its merits and shortcomings. For the former group, the WRX is a solid track-ready piece of Japanese engineering with a very attractive price tag. Meanwhile, the latter group points out the vehicle's dated interior and lack of comfort features as severe detriments to its utility as a daily driver.

Such an intense polarization of appraisal can often be confusing and frustrating to potential new WRX buyers. Fortunately, the following review will address all of the most critical questions about the new WRX in an unbiased and informative way. Please keep reading to find out everything you need to know about the 2021 Subaru WRX.

Although Subaru's landing page claims that the new vehicle is the "best-handling, best-performing" WRX ever, the reality is that the 2021 model is identical in all but name to the 2020 model. The only exception is that both passive hands-free entry and keyless ignition are now in the Limited trim's standard loadout.

The 2021 Subaru WRX is available in five different trims:
Base. This entry-level trim includes only the most bare-bones features and is only available with the 6-speed manual transmission.
Premium. The Premium trim comes standard with a power-sliding moonroof, sport-tuned suspension, and halogen fog lights. Additionally, buyers can choose several premium features like custom racing seats, sportier brakes, and an automatic transmission.
Limited. The differences between the standard features of the Premium and the Limited are negligible. That being said, the Limited does offer several optional safety features like blind-spot detection, reverse automatic braking and other driver assistance technology.
STI. The STI is the first in the WRX lineup equipped with the beefier 2.5L 4-cylinder turbocharged engine and the STI-tuned performance suspension.
STI Limited. The final trim builds upon the STI foundation by including all of the previously optional features by default.

The choice of trim ultimately depends on which engine you prefer to have in your WRX. Since only the STI and the STI Limited have the 2.5L engine, the former is the best choice for the performance-to-price ratio.

However, if you care more about features and affordability, then the Premium or the Limited trims are great choices. The base WRX is difficult to recommend on account of its spartan interior and lack of customization options.

Compared to other models in the WRX's price range, the cheaper trims' included technology is sparse and underwhelming. For example, the Starlink 7-inch infotainment system is woefully inadequate for a vehicle of its class. The standard technological features are primarily performance-focused, such as continuous all-wheel drive, torque vectoring, and automatic dynamics control.

Because the WRX emerged out of the rally-car culture of the 1990s, Subaru's design ethos makes sense from a practical perspective. Unlike regular streetcars, rally cars don't need blind-spot monitoring, electric seat heaters, and projected head-up displays. Even though the modern-day WRX is marketed and produced for a broad driver base, it's still a rally-car at heart.

However, this is not inherently a bad thing. Modern cars are chockfull of technology that many drivers may never even use. The WRX gives people the option to pick and choose which features they want to have in their car, and the list of choices is decent. For example, buyers can opt-in for the Harman Kardon enhanced speaker system, adaptive cruise control, pre-collision braking, and automatic high beams.

The 2021 WRX is a great car to drive at high speeds on mixed terrain. The adaptive all-wheel drive and the performance-tuned suspension are a perfect match for the 4-cylinder turbocharged engine. Even the smaller 2.0L engine can take the WRX from 0-60mph in less than six seconds.

In terms of handling, the car feels crisp and responsive and takes even the sharpest corners with ease. Few vehicles can offer such a perfect sense of control and barely-restrained power as the WRX.

That being said, the 2021 WRX does have some problems that may be a serious turn off for prospective buyers. For one, the sporty suspension is very rigid and brutal to its passengers on rough terrain. While it's perfect for the track, it can be quite jarring and uncomfortable for a leisurely countryside drive. Second, the engine has a noticeable lag at lower RPMs, and driving at low speeds feels unsatisfying and requires near-constant gear shifting.

Surprisingly, the 2021 WRX shares the same impressive safety and reliability scores as most other Subarus on the market. The NHTSA gave the vehicle a perfect five-star safety rating. Similarly, the WRX has been on the IIHS Top Safety Pick+ list since 2016.

The interior design of the 2021 Subaru WRX is very minimalistic. The standard seats are made of cloth and are neither exceptionally luxurious nor painfully uncomfortable. The positioning of the gauge clusters and vehicle controls is intuitive and practical.

While the vehicle can technically transport up to five people in total, it's important to remember that the bumpy and rigid ride will likely be extremely uncomfortable for any passengers. Not to mention the significant amount of outside noise that makes its way into the cabin.

The main competitors of the 2021 Subaru WRX are the Honda Civic Type-R and the Volkswagen GTI. In terms of affordability, the WRX sits squarely in the middle of these two cars. Unfortunately, the lack of year-to-year design innovation and the minimal interior significantly decrease its mass-market appeal. However, few vehicles have as much personality and performance capability as the 2021 Subaru WRX.
Find the best Lease Deal on a Subaru WRX

Note: All Subaru WRX lease prices and dollar figures above are approximate amounts. Prices are subject to change without notice.