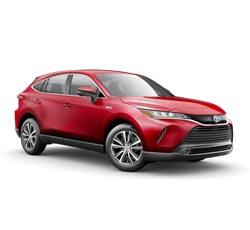 Find Out How Much to Lease a Toyota Venza Below

To avoid overpaying on a new Toyota Venza lease, get up front lease prices before you visit the dealer. We recommend the following free services; Car Clearance Deals,   NADAguides,   Motortrend  &   CarsDirect

About the Toyota Venza:

After taking it off the production line for several years, Toyota has brought back the Venza. The 2021 Toyota Venza is exclusively offered as a hybrid vehicle, and it fills the slot between the RAV4 and the Highlander in the company's lineup.

Toyota makes three trims of the Venza. They all have the same type of hybrid powertrain, so their differences come down to exterior and interior features.

The first trim is the LE. It rides on 18-inch wheels, and it has black garnish around its bumpers. Some of its high-end exterior components include LED headlights, a hands-free power liftgate, and a smart key system that works on the tailgate and the front doors. People will be pleasantly surprised that the LE has wireless charging, a leather-warped steering wheel with audio controls mounted on it, and an eight-inch touchscreen with smartphone connectivity.

Next up in the lineup is the XLE. It has many of the same technologies that are found in the LE, but it has available navigation. Plus, it's smart key system works on all of the doors instead of just the front ones. Its cabin feels refined, as it has wood-grain-style trim, soft-touch armrests, and SofTex incorporated into the fabric seats. In the winter, people will appreciate that the XLE's front seats are heated. The XLE looks more upscale than the base model since it has 19-inch wheels and chrome accents.

Finally, there's the Limited. As one would expect after seeing how much more expensive it is than the others, it has the most sophisticated elements. They include heated side mirrors with puddle lights, a digital rearview mirror, and a 360-degree camera view. It treats people in the front row to both heating and ventilation, and its seats are covered in SofTex. It's the only trim to come standard with navigation and a premium audio system, and it's the only one that can be upgraded with a Star Gaze panoramic roof.

With just three options to choose from, the choice should be fairly straightforward. The Limited, which costs about $40,000, will appeal to those with refined tastes and the budgets to match those preferences. The LE and XLE are both excellent options, but note that the XLE has some extra features that people may feel that they need.

The LE and XLE have eight-inch touchscreens. These screens come with Apple CarPlay, Android Auto, and Amazon Alexa. Bluetooth and SiriusXM are standard as well, and it can be nice to have the four USB ports in the cabin. On the Limited, the touchscreen measures 12.3 inches, and it has navigation to help people find their way. The enhanced sound system on the Limited uses nine JBL speakers to produce a deeper, full sound.

Wireless charging is standard on the Toyota Venza, and the highest trim can be upgraded with a ten-inch head up display. Technology can also be incorporated into the rearview mirror in the form of an auto-dimming function or the ability to show a live camera feed in the mirror.

The Venza runs on a 2.5-liter engine and uses an electric motor. These components work together to yield 219 horsepower. Toyota has put in an electronic on-demand all-wheel drive system in every Venza SUV, and it has paired the hybrid powertrain with a continuously variable transmission.

Every Venza is equipped with Toyota Safety Sense 2.0. This is the name of the company's driver-assist technology package. Some of its components are pre-collision braking, pedestrian detection, and automatic high beams. With lane departure alert and steering assist, the Venza can warn drivers when they're drifting and can gently correct their steering. With adaptive cruise control, the SUV can adjust its speed so that it can stay a safe distance away from the vehicle in front of it.

All of these SUVS have monitoring systems that watch out for blind spots and rear cross traffic. On the higher trims, there's also a parking assist function that can hit the brakes to hopefully prevent an accident. The standard rear view camera is quite handy, and the available bird's eye view camera can be even more useful.

People should find the Venza to be fairly spacious. The back row can comfortably fit three passengers, and it has 37.8 inches of leg room. Up front, the driver and passenger have plenty of space as well.

The rear cargo area has a volume of 28.8 cubic feet, and it can be expanded to 55 cubic feet when the second row is folded down. What's nice is that the 60/40 split bench can be folded flat to make it easier to load cargo. If two people are riding in the back, the center seatback can be folded down to give people an arm rest and a pair of cup holders.

Toyota has made an effort to make the Venza a sophisticated model. A leather-wrapped steering wheel, wireless charging, and LED interior lights are all standard. The mid-level trim has seats covered in fabric and SofTex, while the Limited has perforated SofTex seats. Heating and ventilation are available, and the steering wheel can be heated, too.

Perhaps one of the most amazing things about the Venza is that it can have a Star Gaze panoramic roof. It extends over the two rows of seats, and it takes advantage of electrochromic glass technology. This means that it can instantly switch from being transparent to frosted, depending on how much light people would like to let in.

There are a lot of choices when it comes to mid-size SUVs. Alternatives to the Toyota Venza include the Nissan Murano, Hyundai Santa Fe, and Jeep Grand Cherokee. Perhaps one of the toughest competitors will be the Toyota RAV4, especially since it comes as a hybrid.

Find the best Lease Deal on a Toyota Venza

Note: All Toyota Venza lease prices and dollar figures above are approximate amounts. Prices are subject to change without notice.