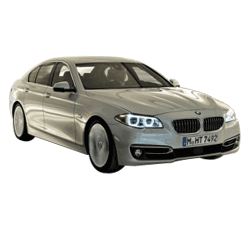 Each year, the BMW 5-Series sedan remains one of the most sought-after driving machines on the market. In the eyes of many car enthusiasts, the 5-Series is the cream of the crop in the mid-sized sedan segment. Owners have grown to love the sedan’s impressive road handling and excellent build quality. Sticking to tradition, the 2014 BMW 5-Series continues to deliver elegant styling and a very luxurious driving experience. The amount of high-tech features offered is second to none in its class. Unlike some of its rivals, every trim of the 5-Series is capable of obtaining good fuel efficiency.

The biggest announcement for the 2014 model year is the arrival of BMW’s new turbocharged diesel engine. This helps the 5-Series to deliver an impressive on-road performance while keeping fuel consumption to a minimum.

While the exterior design remains virtually the same, BMW did make a few minor styling tweaks. On the inside, prospective buyers will notice that every 5-Series trim now includes navigation as standard equipment. Not only is the system very easy to use, but the display screen also provides very clear graphics.

A manual transmission is no longer offered on the 2014 BMW 550i trim. However, the eight-speed automatic transmission does provide paddle shifters to give the sedan a sportier driving dynamic.

1) The 2014 BMW 5-Series offers outstanding long-term value. Even after five years of ownership, 5-Series models will still retain the majority of their value. The BMW 5-Series sedan is highly coveted on the used car market. Due to the sedan’s reputation for quality, some buyers will be willing to pay top dollar.

2) The 5-series offers an engine to fit the needs of every driver. While some buyers will prefer the superb efficiency of the base engine, there are others who will crave the sensation of the 443-horsepower V-8 engine. The new diesel engine gives 5-Series owners yet another versatile engine choice. The turbocharged six-cylinder engine is very exciting to drive, especially when mated with a manual gearbox.

3) Over the last few years, BMW has focused on improving the fuel efficiency of the 5-Series. The new diesel engine’s fuel economy is very impressive with a rating of 38 miles-per-gallon on the highway. Due to BMW’s auto stop-start technology, even the muscular V-8 model is able to deliver a combined gas mileage rating of over 20 mpg.

4) Unlike some of the other clumsy sedans on the market, the 5-Series is engineered to deliver crisp road handling. Every 5-Series trim features Driving Dynamics Control, which enables the driver to tune the suspension, steering, and transmission. Meanwhile, the Dynamic Handling package transforms the 5-Series into a legitimate sports sedan. The best part is that the ride quality remains very enjoyable.

6) When researching the BMW 5-Series, prospective buyers will notice that the car obtained a five-star overall rating in governmental crash testing. Some of the available safety features include parking sensors, a rear-view camera, blind-spot monitoring, and a lane-departure warning system. The advanced braking system actually wipes moisture off the brake rotors during wet weather. BMW’s exclusive Night Vision headlight system uses infrared technology to spotlight objects that are in the path of the vehicle.

7) One of the best reasons to buy a BMW 5-Series is the prestige that comes with ownership. A BMW 5-Series is not your average, run-of-the-mill family sedan. It is an elite automobile that offers all of the latest car technology. From movie stars to professional athletes, they can all be seen cruising in a 5-Series.

8) The 2014 BMW 5-Series is packed full of creature comforts. Some of the luxuries include adaptive headlights, leather seating, a rear-seat entertainment system, 600-watt Harman Kardon sound system, heads-up display, and four-zone climate control. BMW’s iDrive interface is also one of the top on-board computer systems on the market.

9) The versatility of the BMW 5-Series is one of its best attributes. While some owners will use their 5-Series as a daily-driver, there are others who will reserve their BMW as a weekend cruiser. The sedan’s abundance of interior room and frugal fuel economy rating make it the perfect vehicle for a variety of driving purposes.

10) The styling of the BMW 5-Series has gradually changed with each passing year. However, the new BMW 5-Series stays true to its heritage by delivering classy styling with a touch of modernization. Previous 5-Series owners will find the current exterior design to be very appealing. BMW cars have always benefited from having a timeless exterior design.

1.) Car shoppers who are on a very strict budget may find the new 5-Series to be beyond their financial means. The sedan’s high-tech wizardry and premium components cause the total cost to rise. Expect the price of a base 5-Series to hover around $47,000.

2.) The 2014 BMW 5-Series is engineered to be very reliable. However, the owner needs to always use genuine BMW parts in order to prolong the life of the car. After the original warranty expires, the owner will need to budget for the cost of replacing parts.

3.) Due to the overall value of the 5-Series, the cost of insurance may be a little higher than the average commuter sedan.

When it comes to mid-sized luxury sedans, the 2014 BMW 5-Series is in an elite group of automobiles. The sedan's inspiring driving dynamics and cutting-edge engineering put it at the forefront of its class.