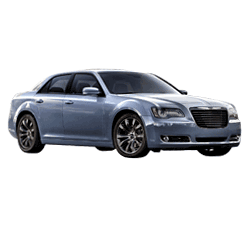 The 2014 Chrysler 300 is a large size sedan that has not strayed much from the original styling of the first model. It is a car built to last and is made for performance. The Chrysler 300 is a model that straddles a thin line between a luxury sedan and a powerful muscle car.

The 2014 model has new features including bulked up safety options, a stronger drive train and optional extra luxury packages.

1. Cost
At a MSRP ranging from around 30,000 to 48,000, the 2014 Chrysler 300 is one of the most affordable in its class. It ranks as number 5 in the large sized car class that it is in. Despite the price, it is still filled with available features and luxury designs.

2. Size
When choosing a sedan, many people do not take the size of the car into consideration, but it is something that must be carefully weighed in. The size matters because it helps create a roomier inside environment and makes entry and exit of the car easier and a quicker transition. The Chrysler 300 is in a large class of cars and is, in fact, one of the largest in its class.

3. Gas Mileage
MPG is a very important aspect to people that are buying a mid size or large size sedan. While the luxury and size are important, the type of gas mileage that the car gets is equally important. The 300 stands as one of the best cars in the large size sedan class by getting 19 mpg city and 31 mpg highway.

4. Acceleration
The Chrysler 300 boasts 292 horsepower and a V6 engine. The base model comes with an 8 speed automatic transmission that allows for quick acceleration. The V8 option that is available in the car has even more powerful acceleration speed. The V8 allows the car to reach speeds of up to 60 mph in less than 5 seconds. These acceleration speeds are much higher than other large size sedans.

5. Braking
Despite the size of the 300, it is a car that can stop nearly on a dime. The braking power in relation to the weight and mass of the car is nearly unheard of and allows drives an extra level of safety. The SRT model gives drivers even stronger braking capabilities while making the ride more smooth and quiet, especially when driving on particularly uneven terrain.

6. Luxury Interior
The interior of the Chrysler 300 got a huge upgrade in the year 2014. It is constructed of nearly all premium materials and is designed for those looking for a luxurious ride. Both the rear and front seats have plenty of room for stretching out while the materials add a touch of class to an otherwise ordinary type of car. Many professional review sites have noted that the interior of the 300 is comparable to that of a Lexus or BMW.

7. Safety
The Chrysler 300 rated 9.7 out of 10 in overall safety features. It boasts 5 stars on every category except for rollover where it obtained an unsurprising 4. The safety features include a driver airbag, passenger airbags, brake assist, blind spot monitor, traction control and a wide variety of other features that were designed specifically for better, more accurate and safer handling of the car.

8. Interior Space
Despite the company's need for a more luxurious interior, they did not skimp on the amount of room that is within the car. It is very important for a car to have a roomy interior, and this interior was not compromised by all of the luxury details that were added to the vehicle. There is a large amount of both leg and headroom and plenty of room for extra cargo in the spacious trunk.

9. Warranty
Chrysler is known for many things, one of them being the length of time that their cars tend to last. Their warranty is reflective of this commitment to longer lasting cars. The Chrysler 300's warranty is comparable to others in its class; it has a 3 year or 36,000 mile full warranty and a 5 year or 100,000 mile power train warranty.

10. Exterior Design
While the Chrysler 300 has remained somewhat similar in its design throughout the years, 2014 was perhaps one of the biggest leaps it has taken in its exterior design features. The large size sedan was upgraded with sleek, modern lines and a variety of color palettes to suit many different modern tastes. It is also available with many different trim packages that were previously unheard of.

Overall, the 2014 Chrysler 300 outweighs many other cars within its class. When safety, performance and design are taken into consideration it comes out as one of the top cars in the larger size sedan class.