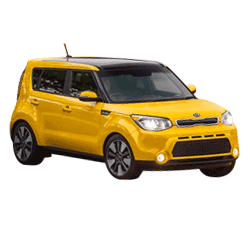 The newly redesigned Kia Soul for 2014 took some inspiration from the 2012
Track’ster. Designers took a new direction from an older concept car. The front of the Soul looks a little like the Track’ster – the grill and headlamps are higher giving the illusion of a larger, higher hood, when in fact, it’s neither. Widening the tailgate by 2 inches made the tail lamps taller and thinner, adding a graceful look to the rear of the vehicle. If you’re not familiar with the Kia Soul, you could put both the 2013 and the 2014 side-by-side and find it difficult to spot the differences to the exterior.

Most of the redesign shows up inside the vehicle. The new-look interior features a reformed steering wheel, sportier dashboard and gauges with soft-leather highlights that are inspired. In the 2014 model the UVO infotainment system is powered by an Android Linux operating system rather than the Microsoft system in previous years. The newly redesigned interior is far superior to the 2013 model. Although the 2014 model offers more standard safety features and a little more wiggle room, it’s still a sub-compact and only provides seating for four passengers.

1) Even the Soul base model features four-wheel anti-lock disc brakes, which gives you an even, steady stop. Most other vehicles in the class only have rear drum brakes.

2) Safety, safety, safety. The redesigned Kia Soul has six air bags – two in the front; two seat-mounted side bags; and two full-length side curtain bags. These features coupled with the electronic stability control helps the 2014 model step up to a 5-star safety rating from National Highway Traffic Safety Administration, over the 2013 models’ four-star rating, which I’ll discuss later.

3) Steering is improved with the Flex-steer system. With this system you can switch between Comfort, Normal, and Sports modes even while on the go, though some will say the difference between modes is almost imperceptible.

4) The box-like design means there’s no curved roof to inhibit entry and exit, which makes getting in and out easy even for the tallest passengers. Although this is also true in some other vehicles like the Nissan Cube and Scion xB.

5) The center-stack and its controls for audio, climate, and the infotainment settings are slanted toward the driver, as those should be.

6) The base model finally offers an automatic transmission, which is optional of course.

7) IPod connectivity and Bluetooth are standard.

8) The cabin is remarkably quiet and small bumps are hardly noticed, which is rare in a subcompact. Part of the reason for the quiet ride is the noise-dampening windshield.

9) The UVO – short for your voice, is the car’s infotainment system with voice and touch-screen activation.

10) The second-row of seats can be folded down to boost the cargo area to 53 cubic feet. And, the cargo floor lifts to expose even more storage, which is compartmentalized with bins to allow for proper storage without shifting.

1) The 24-City and 31-Highway EPA-rated miles per gallon were lower than comparably built vehicles. Consider the MINI at 28/35 or the Fiat at 31/40, although the MINI is quite a bit more expensive, the Fiat is about the same price.

2) The manual transmission is only available in the base Soul model, but some would consider that a plus, since they can’t drive a standard transmission anyway.

3) Keyless entry is not available on the base model.

4) You can get the Navigation system or the UVO system voice control for the infotainment system, but you can’t get both together.

5) Climbing hills or passing with a full load seemed a bit of a challenge for the 1.6 liter engine, which I test drove and some have said the same is true for the 2.0 liter.

6) The thick rear pillar is an obstacle when backing or changing lanes. The rear backing camera available in the Soul+ and Exclaim models eliminates that obstacle when reversing, but is not available on the base Soul.

7) I didn’t like the automatic transmission’s performance between fifth and sixth gear out on the highway. It seemed like it was “hunting” for a comfortable spot some times. If you let off the accelerator a little it would want to downshift. I just think it could be smoother.

The 2014 Kia Soul, Soul+, or the Soul Exclaim are nice, four-person family cars and were redesigned with your safety in mind. Lots of its features, standard or optional, were added to increase not only its safety rating, but its safety image as well. The interior of Soul makes it practical for adults to sit in the rear seats, which is not often true with subcompacts. Although most changes to the exterior of the vehicle are hardly noticeable, the improved ride and more noise resistant insulation raise the bar for other vehicles in its class.

The Insurance Institute for Highway Safety (IIHS) gave the Kia Soul a “Top Safety Pick” with good grades for side and front impact, plus the standard stability control. The National Highway Traffic Safety Administration (NHTSA) recently released its rating for the 2014 Kia Soul and other subcompacts.
According to autotrader.com, The 2014 Soul was rated as 5-Stars overall, the government’s highest rating and the details can be read here:

• 2018 Kia Soul trim levels. What you get with each trim configuration.