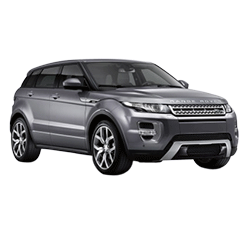 Should You Buy a 2015 Range Rover Evoque? Here Are Some Reasons For and Against

"An urban Land Rover." Had someone written that phrase in 1970 when the Range Rover model was first introduced, they would have been laughed out of a job. Legend has it that the original Land Rovers were driven thousands of miles strictly on banana oil. No more. The 2015 Land Rover Range Rover Evoque is the newest manifestation of that hallowed legacy, but it was probably field-tested downtown.

All Evoque models with the blind-spot monitor gain rear cross-path alert, and all models equipped with the parking assist system gain perpendicular parking assist. Two new option packages debut: Convenience and Black Dynamic. Making headline news for 2015 are the two Autobiography limited-edition models, both as capable as Panzer tanks and twice as expensive.

The Evoque sprang from the virtual womb of the LRX, a concept car designed to be environmentally-friendly. Therefore, the crossover benefits from 181 g/km of CO2 emissions as measured on the European driving cycle.

New for 2015 is InControl Apps, an infotainment addition that renders Apple and Android smartphone apps the same on the car's 8.0-inch touchscreen as they appear on their native device.

Thanks to the Evoque's nine-speed automatic transmission and turbocharged engine, all models achieve an EPA-estimated 21 city/30 highway mpg rating.

4) For the Love of Music

Even the stingiest Evoque trim, the Pure, comes with an 11-speaker Meridian audio system. The Pure Premium upgrades to a 17-speaker system, after which one would assume Land Rover ran out of space.

The Evoque inspires lust in even the most jaded driver. Its high roofline, bulldog stance and dramatic rear spoiler distinguish it from the flotsam and jetsam of other luxury SUVs. The Black Dynamic package adds to the mystique with murdered-out fenders, skid plates, exhaust tips, exterior lettering and other exterior bodywork components.

Most of the Evoque can be operated with the leisurely push of a button: the power liftgate, the ignition, the steering wheel, the front seats, the mirrors, sunroof, etc.

Every Evoque boasts front and rear parking sensors and a rearview camera. Available on select trims are a blind-spot monitor, five-camera 360-degree parking system, adaptive cruise control, and other features heralding the arrival of the autonomous automobile.

The Evoque Prestige, the topnotch trim out of five, has heated seats fore and aft and even a heated steering wheel. Considering that most of America experiences annual single-digit temperatures, what's not to love?

Rutted washboard roads and rock-strewn trails are no match for the Evoque's 8.3 inches of ground clearance, standard part-time all-wheel drive and stiff unibody chassis. It can ford 19.7 inches of water and clamber over a 25-degree slope. However, with all that said, the Evoque remains the least athletic model sold by Land Rover.

Motivated by a 2.0-liter turbocharged four-cylinder engine, the Evoque achieves 240 horsepower and zooms from 0-60 mph in just 7.1 seconds. No highway sluggard stands a chance. The Autobiography Dynamic trim (late availability) draws 285 horsepower from its turbocharged engine.

No Evoque rides on a pillow, and when equipped with the optional 20-inch wheels, the ride only gets worse. Every molehill becomes a mountain.

Unlike ye olde Land Rovers, designed for field servicing with nothing more than chewing gum and barbed wire, the 2015 Range Rover Evoque requires imported components that charge dearly for the privilege.

Several users have reported quirks and complications using the Evoque's 8.0-inch touchscreen or voice command feature to play one of their 10 in-car CDs, ask for turn-by-turn navigation, or access the 360-degree parking system, complaints to which one might retort, "First-world problems."

The 2015 Porsche Macan might cost $10,000 more, but it has comparable off-road credentials and mind-boggling on-road performance. The 2015 Audi Q5 offers most of the Evoque's interior gadgets for thousands less, and the 2015 BMW X3 offers superior performance. And what could beat the comfort of a 2015 Lexus NX 200t? But when it comes to love – and love, after all, is what sells luxury vehicles – the Evoque has the last word.

When the Land Rover Range Rover Evoque was first introduced, Land Rover sold 80,000 in the first year. That original edition had all the idiosyncrasies of the modern one: Lilliputian headroom, limited cargo capacity and middling power. Why the popularity?

Because the Evoque, through whining turbochargers and polished woodwork and panoramic sunset sunroofs, speaks to the heart, and when the heart speaks, the wallet follows.
New Car Buying Guides: