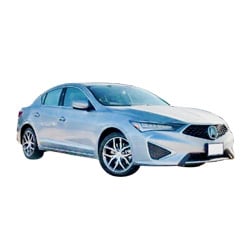 Should You Buy a 2019 Acura ILX? Here Are Some Reasons For and Against

If you're looking for a small luxury sedan that costs less than $30,000, don't miss out on the 2019 Acura ILX. Drivers will appreciate the ILX's splendid fuel economy and solid crash scores. While the ILX was already a strong bargain, the new model brings even more value to the table. An AcuraWatch safety package now comes standard on every new ILX. While this sedan is an appealing option, it does suffer from a few potential deal breakers. Let's find out if the new Acura ILX is the right car for you.

The 2019 Acura ILX's styling has been significantly updated. Acura has also revamped the sedan's infotainment system. Apple CarPlay and Android Auto are now available for the first time.

The 2019 Acura ILX allows you to ride in luxury without depleting your bank account. Prices start at just shy of $26,000. This means the new ILX is actually a couple thousand dollars less expensive than last year's model. Even the top trim is priced below $30,000. Some of the standard features include internet streaming radio, smart entry, and heated front seats. You'll also benefit from the ILX's low cost of maintenance, which is far lower than the typical luxury car.

Don't underestimate the ILX's standard 2.4-liter, four-cylinder engine. Over the years, this Honda-built engine has become known for its lively character. It kicks out an entertaining 201 horsepower and 180 pound-feet of torque. Although the ILX is a step slower than some competitors, it does not feel sluggish. When accelerating, the engine's sporty sound helps create a sense of driving excitement. In terms of fuel economy, expect the ILX to return a combined 29 mpg on premium gas.

3. Sporty Enough for You to Have Fun

The 2019 Acura ILX is not designed to go head-to-head with a pure sports sedan. Nevertheless, it is definitely not a boring car to drive. Drivers will enjoy the ILX's rather quick steering. You'll also like how secure the ILX feels on twisty roads. Although a traditional manual gearbox is no longer offered, paddle shifters allow you to control the gear shifts. A larger set of 18-inch performance tires are found on the upper trims.

The new ILX's styling is inspired by the high-performance Acura NSX supercar. It definitely looks more engaging than before. In fact, many people will mistake the ILX for the midsize Acura TLX. Acura's cool Jewel Eye headlight design remains a focal point. If you really want to impress your family, opt for the A-Spec appearance package. This package outfits the sedan with a black decklid spoiler and darkened exterior trim. The A-Spec wheels look just as special.

5. Comfy Enough for Most Families

Although the 2019 Acura ILX is not a big car, it still manages to offer enough space for families. Average-size passengers can climb inside without bumping their knees. There's also a good amount of foot room behind the front seats. Drivers will be especially comfy. A power sport seat enables you to obtain a confident driving position. The trunk is also large enough to store groceries.

Buyers no longer have to pay extra for the AcuraWatch safety package. It's now included in the sedan's list of standard equipment. While the Collision Mitigation Braking System anticipates crashes, Road Departure Mitigation prevents you from accidentally veering off the pavement. Adaptive cruise control and lane-keep assist are included as well. While blind-spot monitoring is offered, you must step up to a higher trim.

While behind the wheel of the 2019 Acura ILX, you won't have to deal with any big blind spots. This sedan's good outward visibility definitely makes it safer to drive. When preparing to switch lanes on the interstate, you'll be able to remain aware of oncoming traffic. A wide-angle camera comes standard, which helps you to gain a better view of parking obstructions.

The 2019 Acura ILX will do a good job of shielding passengers during an accident. It received the NHTSA's top overall rating for impact protection. Front crash prevention is considered to be "Superior" by the IIHS. Every family will be able travel with a additional peace of mind. You will also benefit from the ILX's responsive brakes, which performed well during panic tests.

Don't expect the standard sound system to have a strong bass output. The available ELS Studio system is a major upgrade. In fact, you won't find a better sound system for the price. It comes equipped with a total of 10 speakers and a 440-watt amplifier. According to music listeners, the ELS Studio audio system gives you the feeling of being at a live concert.

The ILX's dual-screen infotainment system has never been a fan favorite. However, Acura has tweaked it to be more responsive to your touch. Graphics are sharper as well. Smartphone users will especially like the fact that Apple CarPlay and Android Auto were added.

1. May Not Be Big Enough for Some Families

If your family is of average size, they should fit just fine inside the 2019 Acura ILX. On the other hand, tall families will likely desire more space for their legs. Headroom is definitely not one of the ILX's strong points. Before you make a regrettable decision, bring your family to the test drive.

Unfortunately, the 2019 Acura ILX does not deliver the smoothest ride. When encountering bumpy road surfaces, expect to feel some roughness. Your passengers may even bounce around a bit. You'll notice the ILX rides more like a regular compact car opposed to a premium luxury sedan. The ILX actually shares its platform with the previous-generation Honda Civic.

3. A-Spec Model Looks Sportier Than It Really Is

A lot of buyers will be interested in the sporty A-Spec model. While the A-Spec model has a more aggressive look, it does not drive like a sports sedan. Aside from upgraded tires, the ILX A-Spec does not benefit from any other performance enhancements. Furthermore, you can't get the sedan with a manual gearbox. It's essentially a sheep in wolf's clothing.

Acura does not offer the ILX with an AWD system. This could turn away the drivers who regularly experience snowfall during the winter. The BMW 3-Series with all-wheel drive would be a better choice.

While the ILX's infotainment system has been updated, some drivers still may not like its twin-screen setup. A single screen would be less of a distraction. The best approach is to try out the system beforehand.

How It Stacks Up to the Competition :

Although the 2019 Mercedes-Benz CLA is more expensive, it does have a few advantages over the 2019 Acura ILX. The CLA's turbocharged engine gives you a stronger kick under the hood. Furthermore, all-wheel drive is available for the Mercedes-Benz CLA-Class. On the plus side, the Acura ILX should be less expensive to maintain.

You should also take a look at the 2019 Audi A3. While the Audi A3 is roughly $6,000 more expensive, it does feel a lot more luxurious on the inside. The Acura ILX's stronger reliability scores will appeal to some car shoppers.

Although the Honda Civic isn't billed as a luxury car, it stacks up well to the Acura ILX. Families will benefit from the Civic's more spacious design and extra fuel savings. On the other hand, some people may not like the Civic's edgy styling.

The 2019 Acura ILX is a standout bargain in the world of luxury cars. Although the ILX isn't the best performer in the segment, it will keep most drivers entertained on their daily commute. Several valuable safety technologies come with the standard AcuraWatch safety package. If style is high on your list of priorities, go for the stunning A-Spec trim. While it may take some time for you to become comfortable with the ILX's dual-screen interface, Apple CarPlay and Android Auto ensure an easier smartphone connection.

Save Money on a 2019 Acura ILX:
Find New Car Clearance Prices - Many Vehicles are Selling Below Dealer Invoice Prices.

Every dealer offers a secret price. Many prices are below invoice. Find yours here.
2019 Acura Buying Guides: