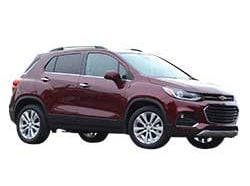 What 2018 Chevrolet Trax Trim Level Should you Buy? What is the Difference Between the Trims?

Since then, the maneuverable, spacious and reliable little subcompact has gotten another refresh in 2017, with the current model remaining pretty much unchanged since then. Sitting right near the middle of the subcompact segment in terms of pricing, the 2018 Chevrolet Trax nonetheless surprises with an impressively-strong set of base equipment, as well as very good results on its safety tests. Higher trim levels also get a nice range of optional safety equipment that is not found on some of the Trax’s rivals.

The 2018 Chevrolet Trax is available in three main varieties that will not be surprising to other followers of Chevrolet’s recent releases: the base LS model, the premium LT, and the upscale Premium. While like most subcompacts, it covers a fairly compressed range of features and prices, Chevrolet has managed to make each of the Trax’s different trim levels feel distinct thanks to their different features.

Each model also has several available packages to customize both their looks and their features, making it easy for buyers to get the features they need and still have a distinct look to their vehicle.

Our guide lists the major differences between each model, as well as the different factory packages that each one can be equipped with, making choosing the right look and equipment that much easier.
Buying Tip: Before you walk into a dealership, price shop Online first. The following pricing services will help you find the best deals:
• Car Clearance Deals
• NADAguides,
• CarsDirect
• Motortrend
Give them a try. These services are free and no obligation.

Compare the 2018 Trax LS vs LT Trims. What is the difference?

The LS model of the Chevrolet Trax is fairly basic and oriented towards budget-conscious consumer and fleet buyers like rental car companies. However, Chevrolet’s interpretation of basic is fairly modern on this model.

Unlike years past, this basic car comes standard with power locks and windows, as well as remote keyless entry and an automatic transmission. It also includes an infotainment and technology setup that can certainly put some mid-range models to shame.

The standard MyLink system includes a 7-inch color touchscreen, Bluetooth streaming audio, and compatibility with both Android Auto and Apple CarPlay smartphone integration apps. It also serves as the display for the standard rearview camera. Above and beyond those features, the LS is otherwise standard for an entry-level model. The 16-inch steel wheels and cloth upholstery are both an indicator of its budget status, as is the lack of cruise control.

The LT, in the middle of the Trax lineup, is likely to be Chevrolet’s best-seller in the model. It is nicely designed, with both a good mix of standard features and a decent selection of options, all without being too much more expensive than the base model.

It first and foremost addresses the shortcomings of the LS model. Cruise control is standard on this model, and it comes with nicer aluminum alloy wheels and premium cloth upholstery. It also includes LED tail lights and running lights, as well as a number of nice exterior and interior trim pieces, as well as heated side mirrors. Satellite radio, a remote starter, and an AC power outlet are all standard as well.

The LT offers all of the same package options as the LS, as well as a number of more substantial ones. The Convenience Package adds a push button start and keyless smart entry, as well as a leather-wrapped steering wheel and extra chrome accent. It also upgrades the upholstery to a deluxe cloth with leatherette seating surfaces, and is a prerequisite requirement for all three of the other packages.

The Sun and Sound package incorporates a sunroof and a 7-speaker Bose sound system, while the Driver Confidence Package adds a blind spot alert with rear cross traffic alert and rear parking assist. Finally, the Redline Edition comes with its own take on the deluxe cloth/leatherette upholstery, as well as 18-inch wheels and a series of sporty black and red accents around the exterior of the car.

The main attraction of the Trax LS is its low price, which is combined with a good number of standard features that are popular among today’s drivers. Its downside lies in the fairly limited features outside of this convenience and infotainment equipment.

In particular, the lack of cruise control and a relatively down-market appearance are major reasons to avoid the LS for anyone who is not hard-pressed for funds, especially since with most dealerships the price difference between the LS and the LT will be well below the listed $2,000 difference.

The LS is much more common than the LT, and carries slightly better incentives. Its better looks, equipment, and optional package selection are easily worth the small increase in price.

Compare the 2018 Chevrolet Trax LT vs Premier Trim Levels. What is the difference?

The premium Trax Premier is the top model for the nameplate and is fairly decently equipped, though it may not match up to some of the more expensive entries on other subcompacts. The Premier is outfitted with standard 18-inch alloy wheels and a full leatherette interior. The driver’s seat is powered and both of the front seats are heated. Fog lamps and an auto-dimming rearview mirror are both standard.

The Premier also includes a number of LT packages as standard equipment, incorporating all of the equipment from the Convenience Package, the Sun and Sound Package, and the Driver Confidence Package, giving it the same upscale equipment such as the Bose speakers and active safety sensors.

The Premier Trax is certainly a nice-looking and a comfortable vehicle inside, but it is also very expensive considering the equipment that it offers. It is nearly $5,000 more than the stock LT, and still comes in at about $2,000 more than an LT with all of the optional packages that the Premier includes. The leatherette interior is also not quite up to the standard of the genuine leather that is found on many competing subcompacts in the same price range, and is not quite a big jump in comfort over the upgraded cloth/leatherette mix on the LT. Similarly, it does not include the more advanced safety technology like forward collision warning, which can also be found on some alternatives to the Trax. These consideration make it difficult to recommend the Premier over the LT for most customers.

The 2018 Chevrolet Trax offers a fairly compressed model range, especially compared to the usually complicated series of trims and options that are usually the rule with General Motors vehicles. The three trims of the Chevrolet Trax are also fairly close to each other in both price and features. The LS cuts out some appearance and convenience features to save a little over the price of the LT, which can be outfitted piecemeal with most of the features of the Premier through its various optional packages.

This means that for most, one of the available configurations of the Trax LT is likely to be the best choice available. With the power and heated seats being the main advantages not available on the LT that are included in the Premier, anyone who does not require those can safely pick up the LT and save a few thousand dollars.

In the same vein, buyers who want to minimize their payments can give up the convenience of cruise control for the extra savings of the LS. However, compared to most other models, the differences between the Trax trim levels are fairly minor, and the choice for most will come down to budget and preference rather than any specific concerns.

To avoid overpaying on a new car, shop prices online first. Get up front pricing before you walk into a dealership. We recommend the following free services; Car Clearance Deals, NADAguides, CarsDirect & Motortrend.
These free services will offer you the lowest prices and supply you with multiple competing price quotes. You will know the best price before you visit the dealer.
Save Money on a 2018 Chevrolet Trax:
2018 Chevrolet Trim Level Buying Guides: