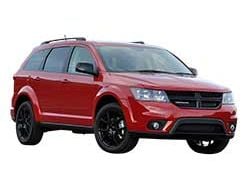 What 2018 Dodge Journey Trim Level Should you Buy? What is the Difference Between Trims?

As one of the two remaining SUVs under the Dodge brand, the Dodge Journey almost feels like a vehicle from another era. While it is a crossover, its exterior has many traditional SUV cues, such as large wheel wells, prominent bumpers, and a voluminous boxy cabin.

First released in 2009, it was one of the last new vehicles developed by Dodge before it emerged from the financial crisis as a part of the Fiat-Chrysler conglomerate. As such, it has remained mostly the same since its release, aside from a facelift in 2011. It has also benefited from the Fiat-Chrysler merger though, as it found a home in many European and overseas markets under the Fiat Freemont name. It has also seen a number of updates more recently.

The 2018 Dodge Journey, for instance, now has a slightly more simplified trim lineup and has received extra standard equipment, including a standard third row. For fans of traditional SUV looks and strong V-6 engines that need the room to carry 7 people, the 2018 Dodge Journey makes for a solid and economical choice.

The current Dodge Journey now comes in four different flavors, including an entry-level SE, the mid-range SXT, and the high-end Crossroad and GT models. Each one offers a fairly solid selection of features, though the model’s age does show slightly in the lack of some of the more advanced technology features found on cars today.

To help buyers get the most out of their next Journey, our guide dives into each of those different trim levels, offering a summary of equipment changes, optional packages, and recommendations for potential buyers.

Compare the 2018 Journey SE vs SXT Trims. What is the difference?

At the base Journey SE level, this crossover does not offer much in terms of standard equipment, though that is easily forgivable given that the Journey starts at between $2,000 and $8,000 less than its competitors in the mid-size crossover segment. Power locks and windows, 4.3-inch touchscreen infotainment, USB input, 17-inch steel wheels, and third-row seating are all standard on this model.

There are a few nice features that are also included that go beyond the basic, such as automatic headlights, dual-zone temperature control, smart entry with push button start, and heated exterior mirrors. The base engine is a 2.4-liter four-cylinder engine that is matched with a four-speed automatic transmission and front-wheel drive. Upgrading to all-wheel drive also gets you the more powerful Pentastar V-6 engine, as well as a six-speed transmission and a more robust suspension system.

Other available upgrades for the SE are also available in the form of several packages. The Popular Equipment Group covers the steering wheel and shift knob with leather, upgrades the air conditioning system to three-zone control with rear vents, and adds an interior observation mirror. The Connectivity Group adds a CD player and Bluetooth with voice commands to the audio system. Finally, the Blacktop Package and the Chrome Appearance Group add blacked out and chrome components to the exterior. The Mopar All-Weather Group adds weatherized floor mats and cargo trays.

The SXT serves as the middle trim level for the Journey lineup, adding a few extra appearance features to the model as well as expanding the available options. There are LED taillights and standard 17-inch alloy wheels, and the engine availability is expanded. The four-cylinder is still front-wheel drive only, while the V-6 is available in both front-wheel and all-wheel drive models.

The SXT offers a number of similar packages to the SE, but there are also a few additions, and some of the returning packages have added features. The Connectivity Group, the All Weather Group, and the Chrome Accent Package carry over unchanged from the SE. The Blacktop Package adds an upgraded suspension for front-wheel drive models, as well as several additional black accents and 19-inch black gloss alloy wheels. The new Chrome Appearance Group goes with chrome 19-inch wheels instead, as well as chrome roof rails. There is also a Uconnect 8.4 Touch Screen Radio Group that adds an 8.4-inch touchscreen that upgrades the climate control to an automatic digital version, and also includes a rearview camera and rear parking assist. Finally, the Premium Group replaces the Popular Equipment Group, including all of its features as well as including premium low-back power adjustable front seats.

The base SXT model is significantly more expensive than the base SE model, especially if both are optioned with all-wheel drive. It offers few additional features to show for the money, but may still end up as the better choice for most drivers over the SE. That is because it offers many of what are currently minimum requirements for most SUV buyers, such as a touchscreen infotainment system and a rearview camera.

Those who are simply looking for a spacious cabin and an engine to move it will save a significant amount of money by going with the SE, but everyone else who wants a more modern vehicle will want to look at an SXT with the Uconnect 8.4 upgrade and the Connectivity Group.

Compare the 2018 Dodge Journey SXT vs Crossroad Trims. What is the difference?

The Crossroad is the more plush version of the Journey. It includes a leather interior with mesh inserts and leatherette interior trim pieces. It also carries itself with a more sporty demeanor, thanks to its unpainted side cladding and 19-inch wheels. Standard equipment includes many of the options from the SXT, such as the 8.4-inch infotainment system, a power driver’s seat, and 3-zone automatic climate control. Like on the SXT, the front-wheel drive models are available with the four-cylinder engine or the V-6, while the all-wheel drive models are V-6 only.

The Crossroad comes with a solid selection of options that cover the more premium components available on the Dodge Journey. The Family Entertainment Group gives you a 9-inch video screen for the second row, as well as an Alpine 6-speaker audio system with a subwoofer. The Alpine sound system is also available on its own as the Premium Sound Group.

The Driver Convenience Group adds a rearview camera, rear parking assist, and a universal garage door opener. The rearview camera is also included in the Navigation and Back-up Camera Group, where it is bundled with the navigation system, parking sensors, and satellite radio.

The Popular Equipment Group includes heating for the front seats and steering wheel, as well as the universal garage door opener, security alarm, and a remote starter.

Finally, the Nav and Sun Group combines the Navigation and Back-up Camera Group with a power sunroof. The Mopar All Weather Group and Chrome Appearance Group are also available on the Crossroad.


While the mild off-road styling may not be everyone’s cup of tea, the Crossroad is one of the best trim levels on the Journey in terms of equipment. It adds a lot of nice features over the SXT, while not being much more expensive. The large amount of optional packages also allows you to get most of the equipment available on the Journey and selectively tailor it to your requirements.

Compare the Journey Crossroad vs GT Trims. What is the difference?

The highest trim level on the Dodge Journey, the GT comes with some of the optional equipment from the Crossroad standard, while also adding its own more upscale styling features to the interior and the exterior of the vehicle. Its 19-inch wheels are dressed up in Satin Carbon Aluminium, and its perforated black leather interior is accented with red stitching. It also comes exclusively with the V-6 engine and includes the 8.4-liter touchscreen infotainment, heated seats and steering wheel, satellite radio, and the Alpine sound system as standard features.

Most of the optional packages from the Crossroad are also available on the GT. The Family Entertainment Group, Driver Convenience Group, Nav and Sun Group, All Weather Group, Chrome Appearance Group, and the Navigation and Back-up Camera Group all return pretty much unchanged. The Blacktop appearance package from the SXT is also available for the GT. The GT is also the only Journey that can be equipped with a Trailer Tow Prep Group.

Aside from the appearance options, there are few reasons to choose the GT over the Crossroad, as it offers the same features at a slightly higher price point. If the extra expense is not an issue and you prefer the GT styling, it may make for a solid choice, but for everyone else the Crossroad is the much more economical choice than the GT.

Of the four available 2018 Dodge Journey trims, the most popular choices are going to be the two middle models: the SXT and the Crossroad. The base SE, while fairly decently equipped for a car of its vintage, is just a little too basic for most modern buyers. Even with its optional features, it does not quite meet the lower end of driver requirements today, though it can still serve well for more budget-conscious buyers.

Similarly, the high-end GT charges more for almost purely visual upgrades and is not as customizable as the Crossroad, making it a weaker choice than the Crossroad. Drivers who want a solid and inexpensive crossover with plenty of equipment are advised to look into the SXT with a few optional packages, while those who want a more luxurious driving experience should check out the Crossroad and its high-end options.

Either makes for a good budget seven-seat crossover, given that both come in at slightly below the average price for similar vehicles in the segment.

Buying Tip: To avoid overpaying on a new car, shop prices online first. Get up front pricing before you walk into a dealership. We recommend the following free services; Car Clearance Deals, NADAguides, CarsDirect & Motortrend.
These free services will offer you the lowest prices and supply you with multiple competing price quotes. You will know the best price before you visit the dealer.
Save Money on a 2018 Dodge Journey:
Are you Shopping for a New Vehicle? Find the Best Deals with "Free - No Hassle" Prices Quotes.