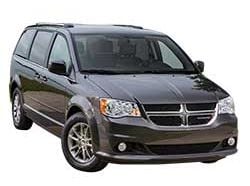 What 2018 Dodge Grand Caravan Trim Level Should you Buy? What is the Difference Between the Trims?

Once the king of the hill when it came to the minivan segment, over the last decade the iconic Grand Caravan minivan has seen stiff competition from both the increasingly popular compact and mid-size crossover SUVs and from the increasingly more sophisticated and advanced minivan competitors.

The 2018 Dodge Grand Caravan is almost completely unchanged from the model that was first released in 2008, and it is showing its age against some of the other vehicles in its class. Despite that, it still has all of the key features that make a minivan an attractive purchase: it is a big vehicle with up to seven seats and a convenient cargo stowing system that makes it easy to convert it between people and cargo hauling functionalities.

Over the last few years, Dodge has taken steps to simplify the Grand Caravan trim level selection. One of the reasons has been a product repositioning, as the company’s other minivan - the Chrysler Pacifica - has moved into the more upscale slot previously occupied by the high-end Grand Caravan trims. The other reason is a move to a more streamlined production line, which allows the Grand Caravan to be one of the least expensive minivans on the market, even when fully equipped.

This guide will go over the new selection of trim levels that is available on the 2018 Dodge Grand Cherokee, as well as the various add-ons, upgrades and options that are available on each model.

Compare the 2018 Grand Caravan SE vs SE Plus Trims. What is the difference?

The Grand Caravan SE carries the distinction of being one of the least expensive full-size minivans currently available in the US. As such, it is not particularly heavy on optional comfort or technology equipment, though it does feature a few nice modern upgrades. It comes standard with 17-inch steel wheels, keyless entry, power windows and manual sliding side doors. The climate control system is a manual one on this model, but it is still split into three zones, with the rear passengers getting their own settings.

Other nice additions include a 6.5-inch infotainment touchscreen with a rearview camera. Also of note is the standard Stow ‘n Go storage system for the third row, which allows the third row to fold down flat into the floor to maximize storage or be set up for tailgate seating.

The SE Plus is the mid-range model, and builds on the SE with a number of additional conveniences. The three-zone climate control is digital on this model and the optional Uconnect Hands-Free Group from the SE becomes standard equipment. It also comes with alloy wheels, automatic headlights, fog lights and a remote starter.

However, the biggest draw of this model is the fact that the Stow ‘n Go system extends to the second row of seating. This makes this model much more versatile than the SE, as you can convert up to four seats into increased cargo space.

The SE Plus also comes with a slightly larger pool of options than the SE, though most of them are a la carte additions instead of packages. The rear seat entertainment system from the SE returns as an option. The SE Plus can also be equipped with either a second-row bench, which is standard, or optional second-row captain’s chairs. Both have fold-in Stow ‘n Go functionality. Other options include a power driver’s seat and a navigation system. The SE Plus is also available with an optional Blacktop Appearance Package featuring racing-inspired blacked out exterior elements.

One of the key questions to ask when considering upgrading from the SE to the SE Plus is whether you plan on using either the second-row captain’s chairs or the second-row Stow ‘n Go capability. Aside from those two options, there is little reason to pay the extra $3,000 for the SE Plus compared to the bargain-priced SE.

If your intention with the Grand Caravan is to use it solely as a people-carrier, then the base SE version is the best choice. On the other hand, if you are also planning on using it as an alternative to a mid-size SUV or a pickup truck when transporting bulky objects like furniture or sports equipment, then the additional versatility of the SE Plus could be worth it.

Compare the 2018 Dodge Grand Caravan SE Plus vs SXT Trims. What is the difference?

While the SXT trim level was formerly a mid-range model, in the simplified 2018 Grand Caravan trim lineup, it becomes the high-end model. As befitting the priciest of the Grand Caravan models, it comes equipped with leather upholstery featuring premium suede inserts. It also includes a number of nice conveniences like the powered driver’s seat, a power liftgate, and powered sliding side doors.

The Blacktop Appearance Package is also available on this model, as is the rear seat entertainment system and the navigation. Exclusive to this trim level is the Driver Convenience Group. It includes heated front seats and steering wheel, as well as second-row window shades and additional lighting and storage throughout the cabin.

Despite being the high-end model, the SXT is missing many of the in-demand features like advanced smartphone connectivity or active safety that drivers have come to value in recent years. As such, it is quite underwhelming for a top end model, though it does come in at a price point that is only a few thousand more than the entry level models from many of its competitors.

As befitting a budget-priced, entry-level minivan that the Grand Caravan has become over the last few years, the best values on this minivan come in the lowest trim levels. The Grand Caravan SE has all of the minivan essentials at well below the starting price of any other minivan.

The SE Plus is only a slight upgrade, primarily distinguishing itself with the second-row Stow ‘n Go seats. If you plan on using those frequently, then the SE Plus could be a good choice, though it is otherwise slightly overpriced for its equipment.

The SXT, on the other hand, offers almost none of the advanced features that are a staple in high-end vehicles, with even such basics as heated seats being an optional feature. Unless you are a particular fan of the leather and suede seating surfaces on this model, then passing on it in favor of the lower grade Grand Caravans is the smarter choice.

In general, unless you absolutely need the features of the higher two models, the 2018 Grand Caravan SE offers the best overall value.

Buying Tip: To avoid overpaying on a new car, shop prices online first. Get up front pricing before you walk into a dealership. We recommend the following free services; Car Clearance Deals, NADAguides, CarsDirect & Motortrend.
These free services will offer you the lowest prices and supply you with multiple competing price quotes. You will know the best price before you visit the dealer.
Save Money on a 2018 Dodge Grand Caravan:
Are you Shopping for a New Vehicle? Find the Best Deals with "Free - No Hassle" Prices Quotes.