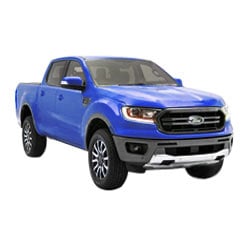 Should You Buy a 2019 Ford Ranger? Here Are Some Reasons For and Against

A lot of drivers are happy about Ford's decision to bring the Ranger back to America. It's already being mentioned among the top midsize pickup trucks on the market. Whether you're looking for a daily-driver or need a vehicle for traveling off the beaten path, the 2019 Ford Ranger should be able to handle the task. Let's find out if the all-new Ranger lives up to its hype.

Although the Ranger has been available in Australia for quite some time, it's finally coming back to the United States. Expect the new Ranger to be larger and more technically advanced its predecessor. You can also look forward to a big increase in power and efficiency.

Automotive journalists continue to rave about the full-size Ford F-150. However, it may be a bit too large for some people. The new Ford Ranger's greater practicality will appeal to a lot of drivers. Not only will the new Ranger be easier to park than its larger sibling, but it should also offer additional fuel savings. Fortunately, you won't be sacrificing a lot of comfort on the road.

Motivating the new Ranger is Ford's popular 2.3L EcoBoost engine. It's been used in a wide range of other Ford models, including the Mustang and the high-performance Focus RS. Although the Ranger's output hasn't been officially announced, insiders expect it to produce at least 300 horsepower. This means the new 2019 Ford Ranger will be able to move out in a hurry. A 10-speed automatic transmission will handle the task of transferring the available power.

3. Can Take You Off the Beaten Path

4. Good for Towing and Hauling

The 2019 Ford Ranger will be a capable pickup truck. It's expected to boast a maximum towing capacity in excess of 7,500 pounds. This is good news for the weekend warriors who may need to pull fishing boats and campers. You can also use the new Ranger for hauling a fairly heavy load. When driving with a trailer attached, an advanced blind-spot monitoring system keeps you aware of other vehicles.

The new 2019 Ford Ranger has a very adventurous look. It's far more modern than the previous generation. An innovative headlight design and a sleek front fascia help the Ranger to stand apart from the competition. Some of the cool color options include Lightning Blue, Hot Pepper Red, and White Platinum. While the base Ranger deserves some consideration, the upper trims levels have a more dashing appearance. Upgraded wheels are found on the range-topping Lariat model. A Sport Appearance package is also available.

Prices for the 2019 Ford Ranger start at less than $25,000, which is thousands less expensive than the base F-150. Although the Ranger is budget-friendly, it doesn't feel like a cheap pickup truck. Test drivers will immediately notice the cabin's quality craftsmanship. Some of the standard features found on the base Ranger include a 3.5-inch dash display, a four-speaker sound system, and cloth bucket seats. Even if you upgrade to the more luxurious XLT trim, you'll still be able to stay under $30,000.

Today's truck enthusiasts have started to demand more safety technologies. It's clear that Ford has put a lot of effort into making the Ranger a safe truck. Aside from the base model, all of the other trims benefit from a CoPilot360 safety package. Blind-spot monitoring and lane-keep assist make driving on the highway a safer experience. Automatic high beams give you an extra peace of mind at night. Forward emergency braking and pedestrian detection will also be among the Ranger's list of optional safety equipment.

Ford's marvelous Sync 3 interface with Apple CarPlay and Android Auto will come standard on the Lariat trim. Not only does this infotainment system quickly link drivers to their favorite mobile apps, but it also boasts incredibly sharp graphics. An 8.0-inch touch screen enables you to quickly scroll through the menu screen. Furthermore, some users will be immediately won over by SYNC 3's simplicity.

If you regularly log onto the web, the Ranger’s available Wi-Fi hot spot will prove to be a major convenience. Because the hot spot can support up to 10 devices, it’s a feature that all of your friends can enjoy. Most importantly, kids will be able to stay entertained on long trips.

Drivers can take advantage of the Ranger’s user-friendly interior controls. Large buttons make the stereo system a breeze to use. You’ll also like the pickup’s no-nonsense climate control system.

1. Ultra-Rugged Ranger Raptor May Not Be Available

Recently unveiled in Australia, the Ranger Raptor has created a great deal of excitement. It comes equipped with a number of special off-road accessories, including Baja-style shocks and advanced four-wheel drive. An 11.14-inch ground clearance makes the Raptor model an even more formidable off-road machine. Unfortunately, this souped-up version of the Ranger may not be introduced on the American market. Many drivers consider it to be a great alternative to the F-150 Raptor.

Ford does not plan to offer the 2019 Ford Ranger with a traditional manual gearbox. While manual transmissions are becoming rarer these days, there are still plenty of drivers who enjoy shifting gears. Buyers most learn to love this pickup’s 10-speed automatic. Truck shoppers who simply must have a manual transmission should check out the 2019 Toyota Tacoma and the 2019 Nissan Frontier.

The Ranger’s turbocharged four-cylinder engine develops plenty of power. Nevertheless, some drivers would enjoy having a second engine to choose from. A diesel power source would take the Ranger’s efficiency to the next level. Rivals, such as the 2019 Chevrolet Colorado, give you a total of three engines to pick from.

The 2019 Ford Ranger offers two body styles: SuperCab and SuperCrew. Both of these body styles feature four doors. Some people have expressed interest in a single-cab Ranger. This is especially true for the drivers who don’t need to accommodate any extra passengers. Furthermore, single-cab trucks typically a have a lower price.

A sports-tuned version of the 2019 Ford Ranger is not offered. Although the Ranger performs well, a lowered suspension would enable it to deliver especially sharp handling. The now discontinued Toyota Tacoma was the last true sport truck on the market.

Some of the other pickup trucks to consider include the 2019 Chevrolet Colorado, the 2019 Toyota Tacoma, and the 2019 Honda Ridgeline. All three of these competitors bring a lot to the table. Unlike the 2019 Ford Ranger, the Toyota Tacoma and the Chevrolet Tacoma offer a manual transmission. Meanwhile, some drivers will like the Honda Ridgeline’s car-like handling.

Although the 2019 Nissan Frontier is also worth considering, it’s not nearly as modern as the new Ranger. Not only does the Frontier lack blind-spot monitoring, but it also fails to offer a Wi-Fi hot spot.

The 2019 Ford Ranger is poised to become one of today’s best-selling pickups. Its class-exclusive safety features and strong performance should appeal to a lot of truck shoppers. This is an especially good pickup for everyday commuting. Optional off-road gear makes the new Ranger even more rewarding. You also can't overlook the Ranger's fresh styling. While the midsize Ranger is a solid truck, it’s still less capable than most full-size trucks. Buyers also don't have access to a manual transmission.

Save Money on a 2019 Ford Ranger:
Are you Shopping for a New Vehicle? Find the Best Deals with "Free - No Hassle" Prices Quotes.