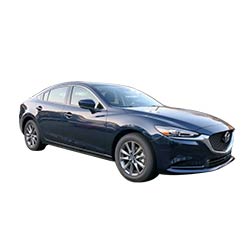 What 2020 Mazda6 Trim Level Should you Buy? What is the Difference Between Trims?

Mazda has cracked the code in terms of offering a luxury experience for an affordable price. The Mazda6 is a mid-size vehicle that's the largest sedan that the company manufacturers. It has a starting price of less than $25,000 for its base model - the Mazda5 Sport. The number of features increases with each trim (as does the price tag), ending with the Mazda6 Signature, which feels comparable with many other high-end models.

Overall, the Mazda6 feels agile and sporty. It's fun to drive and reliable at the same time. It manages to do well in many categories, making it a wise investment for consumers who want to make practical purchases while still treating themselves to something that feels nice and has great style.

For 2020, not too much has changed with the sedan. The Signature gets a few updates, like a trunklid badge and enhanced key fob.

Across the line, there are LED headlights and taillights in addition to a rearview camera. A major advantage of the Mazda6 is that it comes standard with a full suite of driver-assist features. Whether one buys the Sport or the Signature or anything in between, the car will come with safety mechanisms that can keep an eye on the road and even take corrective steering or braking measures as necessary.

This guide will walk potential customers through the differences in each trim of the Mazda6.

Compare the 2020 Mazda6 Sport vs Touring Trim Levels.  What is the difference?

The engine on both the Sport and Touring is a 187-horsepower, 2.5-liter SKYACTIV-G model. It's responsive and fairly quick, paired with a six-speed automatic transmission. If anyone feels like driving with more zip, there is a sport mode available. Estimated mileage is 26/35 (city/highway) mpg, which is pretty respectable.

As previously stated, the Mazda6 comes with several driver-assist features. They include Mazda Radar Cruise Control with Stop & Go functioning. This system is able to adjust to changing traffic conditions and can bring the vehicle to a stop if traffic is at a standstill. The car also comes with traction control and a Dynamic Stability Control system to improve handling.

The Sport rides on 17-inch aluminum alloy wheels, and it has dual exhaust outlets. Providing drivers with convenience are a push button start and remote keyless entry system. Where it feels a bit basic are in the seats. The Sport has cloth-trimmed sport seats, and up front, the driver's seat can be manually adjusted in six different ways.

In contrast, the Mazda6 Touring sits on 19-inch wheels and has a power sliding-glass moonroof. Its seats are trimmed with a leatherette material, and the driver's seat is power-adjustable. Both front seats are heated for additional comfort in the colder months. The center console in the Touring has storage, and it's connected to rear seat vents that back-seat passengers will appreciate. One other feature is that it has illuminated visor vanity mirrors in the front for the driver and passenger.

In terms of technology, the Sport has six speakers and has Bluetooth, allowing drivers to make hands-free phone calls. The infotainment system can be operated through an eight-inch full-color touchscreen. A big way in which the Touring is upgraded is that it has Apple CarPlay and Android Auto connectivity, and this may be a key point for many tech-oriented consumers. It has two USB charging ports in the back since the car may be carrying a full load of passengers with multiple mobile devices.

The advanced keyless entry system on the Touring can make it quicker to lock and unlock the doors. As long as the key fob is in close proximity to the car (such as in a driver's pocket or bag), the Mazda6 will be ready to unlock or lock the vehicle. This is simply done by pressing a small request switch on the door handle; these request switches are placed on the driver's, passenger's, and trunk doors. In contrast, the traditional remote key fob that the Sport has requires a button to be pressed on the key fob in order to lock or unlock the vehicle.

Compare the 2020 Mazda6 Touring vs Grand Touring Trims. What is the difference?

The biggest change at the Grand Touring level is that the Mazda6 now runs on a 250-horsepower, 2.5T engine. The power difference is definitely noticeable, and this may matter to some drivers who value performance. Paddle shifters are mounted on the steering wheel to give people more control over the shifting. This engine gets an estimated 23/31 miles per gallon, and it comes with the same six-speed transmission as the other one does.

The Grand Touring shares many similarities with the Touring. Major upgrades are related to the sound system. Whereas the Touring (and lower trims) come with Pandora, HD, Aha, and Stitcher radio, the Grand Touring comes with those plus the ability to play SiriusXM Satellite Radio. Its audio system is of a much higher quality, being a Bose Centerpoint2 Surround Sound system with 11 speakers that has better clarity and tone.

The other upgrades are nice, but they don't affect the driving experience very much. For instance, the power side mirrors on the Grand Touring are heated and have built-in turn signals, whereas the Touring's mirrors only have the turn signals and not the heating element. The rearview mirror on the Grand Touring has an auto-dimming feature, as the driver's side mirror does. That mirror is equipped with HomeLink technology which can allow the buttons on the mirror to act as garage door openers.

Some other differences are mostly cosmetic, such as the rear spoiler and front lower molding that stands out with its bright finish. The wheels are the same size as they are on the Grand Touring, at 19 inches, but they come with a Brilliant Silver finish that looks a little more sleek. Little touches, like a windshield wiper de-icer and power side mirrors that can automatically fold in, help the Mazda6 Grand Touring Reserve feel like a luxury vehicle.

A significant change to the technology package is that the Grand Touring comes with an Active Driving Display that's projected onto the windshield. This lets drivers know about how they're doing in terms of speed and fuel. When appropriate, the display can give people data regarding safety and provide turn-by-turn directions. The placement on the windshield is intended to boost safety, since the driver can keep his or her eyes on the road while receiving this important information.

Another safety enhancement is the Grand Touring Reserve's adaptive front lighting system. This system is able to adjust the headlights to provide the most illumination for drivers. When turning, the Mazda6 Grand Touring Reserve can point its low beams in the direction that the car is moving, and the lights can auto-level themselves if the terrain is uneven or heavy cargo in the back changes the balance of the vehicle. Lighting things up more effectively means that people can see more clearly and react more quickly to any obstacles or unexpected turns in the road.

Compare the 2020 Mazda6 Grand Touring Reserve vs Signature Trim. What is the difference?

Under the hood of the Signature is that same 250-horsepower engine that the Grand Touring Reserve and Grand Touring have. This means that the driving experience will feel similar from a pure performance standpoint.

What makes the Signature different from the Grand Touring Reserve trim is that it comes loaded with luxury elements. When sitting inside the cabin of the Mazda6 Signature, someone might feel like they're in a sedan made by a luxury brand. This is because the sport seats are trimmed in Nappa leather and there are Ultrasuede and Sen Wood trim inserts.

These high-end materials are paired with a black headliner that's quite modern. The leather-wrapped steering wheel has unique stitching, and there's an overhead console that has LED lighting and a special compartment for sunglasses. The auto-dimming rearview mirror has a frameless style as opposed to the traditional look in the Grand Touring Reserve. The Signature trim is the only one to have a front grille decked out in a gunmetal finish.

When the Signature is purchased, it comes with a three-year subscription to SiriusXM Traffic and Travel Link. This program includes up-to-the-minute information about traffic, weather, sports, and fuel prices. It also can give drivers ideas about where to park, and this can be a huge time saver in many metropolitan areas.

The safety system on the Signature is upgraded to include a system that can "read" traffic signs and remind drivers of what they say, sensors that can alert people when they're getting too close to objects as they park, and a 360-degree camera. All together, the Mazda6 Signature provides a more comprehensive safety package that communicates more key information to drivers.

The Mazda6 comes with two engine choices, and the upgrades are offered in conjunction with modest price increases for each trim. At the introductory level, the Sport does come with many safety features, but its cabin feels pretty basic. Anyone who wants smartphone connectivity through Android Auto or Apple CarPlay will need to look at the Touring or above. Another bonus with the Touring is that its seats change to being trimmed with a leatherette material instead of cloth.

For those who want a higher performing vehicle, there are the Grand Touring, Grand Touring Reserve, and Signature trims. These all have the 250-horsepower engine that is much more capable than the 187-horsepower model. Losing just a bit of fuel efficiency is the trade-off.

When looking at the top three trims, one has to consider how much high-end touches are valued. The Grand Touring has the enhanced sound system with SiriusXM Satellite Radio, along with paddle shifters. The Grand Touring Reserve has leather seats, two rows of heated seats, and the Active Driving Display on the windshield. The Signature has it all, from premium materials to an upgraded infotainment system.

In terms of bang for the buck, the mid-level trims make sense. The Touring and Grand Touring have great value, and they do offer a lot for being affordable vehicles. Potential Mazda6 drivers just have to think about whether they want to pay a little bit more for the upgraded engine. Even for the casual driver, it might be a more pleasant experience driving a car with more horsepower, so when all is taken into consideration, the Grand Touring seems like the best option.
Did you find this article useful?
Please rate this page. Select a star rating from 1 to 5 below:

Save Money on a 2020 Mazda6:
Find New Car Clearance Prices - Many Vehicles are Selling Below Dealer Invoice Prices.