2016 Mercedes-Benz GLE-Class Pros vs Cons. Should You Buy? 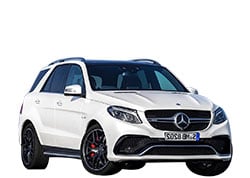 Should You Buy a 2016 Mercedes-Benz GLE-Class? Here are the Pros and Cons

The 2016 Mercedes-Benz GLE-Class has a wide range of powerful engines plus an upscale cabin. The seven-speed automatic transmission comes standards on every model, and the vehicle gets 18/24 mpg city/highway. Unfortunately, some reviewers are disappointed by the poor start and stop feature for the engine. Additionally, some drivers have complained about poor visibility.

The 2016 Mercedes-Benz GLE-Class has a new, upscale cabin made with premium materials, like aluminum trim and high-gloss wood. Leather is also available.

The engine has a start/stop feature that helps to conserve fuel. This makes it easy to take the GLE on long road trips without spending a bundle on gas.

Drivers love that the 2016 Mercedes-Benz GLE-Class has nimble handling. This is great for SUV lovers who don’t always feel like their vehicle of choice is able to expertly handle turns and winding roads. If you want sportier handling, consider one of the coupe models.

The seats in the 2016 Mercedes-Benz GLE-Class are particularly comfortable, something that both drivers and passengers appreciate. It’s no wonder why the GLE is comfort-oriented - the company wanted to appeal to families and luxury vehicle lovers instead of drivers who prioritize sportiness. For even more comfort, select the optional air suspension.

The 2016 Mercedes-Benz GLE-Class boasts a quiet ride from the inside, which is something that Mercedes owners have loved all along. It’s able to do this while still feeling sturdy, safe and solid, something that drivers expect in a quality SUV.

The GLE has 80.3 cubic feet of storage space, which is among the class’ biggest cargo capacities. There’s plenty of room to fit everything a family needs to travel with, from sports gear and groceries to luggage and camping equipment.

Drivers love how crisp the seven-inch display for the infotainment system is. The large screen is placed at the top of the center stack, between vents, making it easy to see and use.

The user-friendly COMAND controller knob is located in the center console. Drivers and passengers alike find it highly usable, making it easy to click through the infotainment center’s several screens. Thanks to this year’s interior upgrade, the COMAND control dial is now underneath a touch pad.

The GLE comes with unique safety features, including a collision prevention warning system and an alert system for driver drowsiness. It also has a pre-safe system that will close the windows and adjust both head rests and seat belts if it suspects an accident is coming.
Buying Tip: To avoid overpaying on a new car, shop prices online first. Get up front pricing before you walk into a dealership. We recommend the following free services; Car Clearance Deals, NADAguides, CarsDirect & Motortrend.
These free services will offer you the lowest prices and supply you with multiple competing price quotes. You will know the best price before you visit the dealer.

While the engine’s stop/start feature is meant to save fuel, some drivers say that it doesn’t work as well as it should. Users find the feature to be unrefined and clunky, particularly when shutting down the car. For a moment, when your foot is on the brake, the steering wheel locks, which can be panic-inducing for some drivers.

Some drivers have complained about poor visibility, specifically in the coupe model, which has a sloped roofline. This causes low visibility in the rear, which isn’t helped by the high tail. While there’s a rear camera, drivers don’t like having to rely only on this when backing up. The rear view mirror isn’t very helpful when it comes to changing lanes and monitoring traffic behind the car. Additionally, some find front visibility to also be low because of the A-pillars.

While the standard GLE has a lot of cargo space, there’s limited trunk room in the hybrid version, because part of the space is taken up by the battery. Overall, the battery takes up eight cubic feet of trunk space, which reduces the cargo capacity by one-third. If you don’t tote around a lot of items on a regular basis, this may not be an issue.

The Mercedes-Benz GLE is often compared to the BMW X5 as well as the 2015 Lexus RX 350. Like the GLE, the BMW X5 also has a powerful engine lineup and nimble handling. Additional similarities include an upscale cabin and a useful infotainment system. Where the BMW comes out in front is in fuel economy. The 2015 Lexus RX 350 has a premium cabin, just like the GLE, and it also boasts a comfortable ride, roomy rear seats and a lot of cargo space for its class.

Overall, drivers love the new Mercedes-Benz GLE because it’s comfortable and spacious enough to be a family car while stilling maintaining the brand’s luxury. It stands up to the competition in its class, making it a great option for luxury car lovers. To make sure you can see well enough, it's a good idea to take it for a test drive.
2016 Mercedes-Benz Buying Guides: