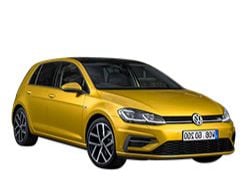 What 2018 Volkswagen Golf Trim Level Should you Buy? What is the Difference Between Trims?

As one of the longest-running and most versatile Volkswagen models, the Volkswagen Golf remains a key component of the German automaker’s American presence. While it is most recognizable as a hatchback, the Golf line actually encompasses a total of six different variants, each of which is available in as many as three different trim levels.

The base Golf is a hatchback, but it also comes in the longer SportWagen version and the raised Alltrack, which also comes standard with all-wheel drive. The hatchback body style is also shared by the all-electric e-Golf and the high-performance Golf GTI and Golf R models, which upgrade the base 170 horsepower engine to a 220-horsepower and a 292-horsepower engine respectively.

Luckily for buyers, there is a significant amount of overlap between these models and the trim levels, making it relatively easy to sort out which model fits your requirements best.

This guide will go over each of the different trim levels available on the Golf, pointing out their differences in equipment as well as the body styles and model variants that they are available with. Using this information, it should be easy for drivers to find which of the different Golf models is likely to serve them best.

Compare the 2018 Golf S vs SE Trims. What is the difference?

The base Golf S trim level is the first of the different Golf trim levels, and is available on the regular hatchback, SportWagen and Alltrack wagons, and the Golf GTI. All of them share mostly the same set of features, with a few deviations. All come with power locks and windows, as well as a 6.5-inch touchscreen infotainment with USB support, Bluetooth, Android Auto, Apple CarPlay, and eight speakers. Power front seats and a leather-wrapped steering wheel are also standard on all, together with alloy wheels and LED daytime running lights and taillights.

The Golf S comes with a 5-speed manual transmission standard, except on the all-wheel drive wagons and the GTI model. These models also come with heated seats standard as well. As is typical for Volkswagen models, there are few options. All models can upgrade their manual transmissions to a six-speed automatic instead, and the Golf SportWagen S is available with optional all-wheel drive, which also upgrades it to a 6-speed manual and adds heated seats. Beyond that, only dealer-installed accessories are available.

The Golf SE is a slight upgrade on the S, and is also the most widely available Golf trim level, as in addition to all of the same variants as the Golf S, it is also available on the all-electric e-Golf.

The models that did not have heated front seats on the S model also get those on the SE as well. The exceptions to those features are the Golf GTI, which has sporty cloth upholstery instead of the leatherette, and the e-Golf, which also has cloth seats and doesn’t get the moonroof and the active safety features. It does have an automatic climate control system instead, and comes with an automatic transmission as standard equipment.

Aside from the automatic transmission option that is available on all the SE models, only the e-Golf gets an optional package, which adds fast charging capability. It also should be noted that there is no option for the Golf SportWagen SE to be equipped with all-wheel drive. Drivers that want an all-wheel drive Golf wagon in the SE trim should instead get the Alltrack. Instead, the SportWagen SE comes with a standard automatic transmission.

For most models, the SE upgrade comes for a fairly substantial price increase, but it is justified by the added safety equipment, leatherette upholstery and other additions that come bundled with the package. Those who have a bit of a larger budget or want more features are going to want to get the SE over the S.

One version of the Golf where the upgrade may not always make sense is the SportWagen. Only available with all-wheel drive at the S trim level, moving up to the SE forces buyers to upgrade to the Alltrack, which is several thousand dollars more expensive, if they want to keep the all-wheel drive capability. Similarly, manual-transmission drivers will find that option gone should they opt for the SE, also forcing them to switch to the more-expensive Alltrack.

Compare the 2018 Volkswagen Golf SE vs SEL Trim Levels. What is the difference?

Beyond the SE level, the different variants of the Golf diverge when it comes to their high-end models. For the wagon versions of the Golf - the regular Golf SportWagen and the raised all-wheel drive Golf Alltrack, the top trim level is the SEL. They both have a standard automatic transmission, dual-zone climate control, an auto-dimming rearview mirror, a navigation system, and premium audio by Fender. The Alltrack also has a special parking steering assist feature. As with most Golfs, there are no further upgrades or optional packages available on these models.

For most buyers, the SEL trim adds little to the wagons, simply due to how rich in features the SE trim level was. Moving to the SEL is a $3,000 upgrade for the SportWagen and $5,000 for the Alltrack, though the latter also includes upgrading to all-wheel drive. The dual-zone climate control and the premium audio are nice features to have, and could be considered very important for some buyers. They will find the SEL trim attractive, but everyone else will get a much better value by sticking with the SE version of their preferred Golf wagon.

Compare the Golf SE vs SEL Premium Trims. What is the difference?

The SEL Premium is the name of the top-end trim level for the e-Golf electric hatchback. It includes the fast-charging optional package of the SE e-Golf, as well as adding a number of comfort features that other Golf SE models got but the e-Golf SE did not. Those include the leatherette seating and the upgraded infotainment system.

A navigation system is also included. More importantly, the SEL Premium comes with an optional Driver Assistance Package, which adds all of the key active safety features like forward collision alert and blind spot monitoring, as well as the advanced parking assist.

The SEL Premium is a fairly expensive car, but all electric vehicles are, and you save plenty through government incentives and not having to purchase gas. However, it is still less expensive than a lot of the alternatives in the segment.

The SEL Premium’s available driver assistance and connectivity features make it a key upgrade for anyone looking to have the latest technology or have the safest car possible, while also having an all-electric vehicle. Whether it is worth the cost depends on the individual budget of each buyer, but generally the SEL Premium is fairly price-worthy compared to other electric vehicles.

Compare the Golf SE vs Autobahn Trim Levels. What is the difference?

For the Golf GTI, the top trim level is given the evocative Autobahn name instead of the more typical SEL one would expect. It still gets similar features to the other models’ SEL trim. The Autobahn edition comes with a GTI-specific leather upholstery, eight-speaker Fender audio, adaptive cruise control, and a navigation system, as well as an auto-dimming rearview mirror and a dual-zone climate control.

It also has a few items that are unique to the GTI. It comes with a surround-view camera and a dynamic chassis control system, which is a fancy name Volkswagen uses for their adaptive suspension. A six-speed manual is still the standard for the GTI, but it can also be upgraded to a six-speed automatic transmission as well.

For a performance enthusiast, the upgrade to the Autobahn edition of the GTI is certainly a juicy one. Unlike most other SE models, the GTI SE does not have a leather or leatherette interior, so that adds significant value to the Autobahn. The adaptive suspension also squeezes a little extra performance from the car, which makes this the second-best Volkswagen Golf in performance terms, only beaten by a much more expensive Golf R.

Those who don’t necessarily enjoy leather and aren’t planning on approaching the limits of the GTI’s abilities may want to stick with the SE though, as the upgrade comes at a costly $5,000 increase in list price.

Compare the 2018 Volkswagen Golf Autobahn vs R Trims. What is the difference?

The Golf R is the absolute highest end of the Golf product line, being even more expensive than the e-Golf SEL Premium. While technically not part of the GTI product line, it builds on it by improving on its performance qualifications.

That is done through the Golf R’s 2.0-liter turbo engine that outputs 292 horsepower - 72 more than the GTI. All-wheel drive is also standard on the R model, as is the adaptive suspension from the Autobahn GTI. It has its own interior and exterior design, as well as its own special leather upholstery. Beyond that, it adds a park distance control system and smart headlights that are auto-leveling and swivel to illuminate turns.

It is also the only Golf featuring an active driving display. It replaces the conventional instrument cluster with a large digital display that can be configured to show exactly the information the driver wants, and can be toggled through a number of different screens to access all kinds of driving-related data for the car. Aside from the optional seven-speed automatic transmission, the Golf R offers no further options, and is otherwise the same as the GTI Autobahn model.

At nearly $40,000 the Golf R is the nameplate’s most expensive model, but it comes with an unparalleled degree of performance. While there are other hot hatchbacks available in the similar price range, the Golf R offers a uniquely German take on that archetype.

For high-performance drivers looking to take their car to autocross events or amateur rally races, this is a great choice. But those looking for a little extra zoom around town may find better value with the GTI, which feels almost as satisfying and costs significantly less.

While there is a large and confusing tangle of different 2018 Volkswagen Golf trim levels and body types available, it is fairly simple to understand. Most drivers should begin by choosing their preferred body type - hatchback or wagon.

The hatchbacks come in regular, electric, and performance variants, while the wagons are available as regular SportWagen and off-road Alltrack versions. From there, each of those varieties comes in an entry-level, mid-range, and high-end model.

The regular and electric hatchbacks are not available in the high-end configuration, with the e-Golf’s SEL Premium more in line with the SE trims on the other models. Finally, the Golf R is the super version of the high-performance GTI, and is priced accordingly.

For most drivers, the mid-range SE trims will be the best choice, as they start at only a little more than the S models and come with much more features. For the e-Golf, the SEL Premium is the better option for the same reason.

Save Money on a 2018 Volkswagen Golf:
Are you Shopping for a New Vehicle? Find the Best Deals with "Free - No Hassle" Prices Quotes.