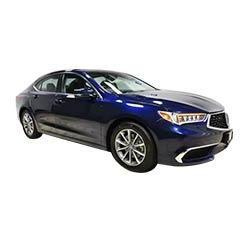 What 2020 Acura TLX Trim Level Should you Buy? What is the Difference Between Trims?

For the last three decades, Acura has been the quiet giant among luxury and performance vehicles. Not only that, but they became the de facto leader in this type of automotive design. The success of their first vehicle, the Acura Legend, inspired other major Japanese manufacturers -- Toyota and Nissan. In turn, they created their own luxury/performance brands -- Lexus and Infiniti.

Like their economical and family-friendly sibling, Acura has not rested on their figurative laurels since their inception. Hence, the reason they've been around for so long. One of more recent vehicles they produced is the Acura TLX. Released for the 2015 model year, the TLX is a luxury compact executive sedan. In other words, it's larger than a premium compact but smaller than an executive vehicle.

The Acura TLX still remains in its first-generation incarnation. However, it did get an interior and exterior facelift in the 2018 model year. This included an upgrade to the front fascia, restyled wheels, and the inclusion of Apple CarPlay and Android Auto options for internet access. Since then, not much has changed.

Currently, there are four different trims for the 2020 Acura TLX with a an MSRP that ranges between $33K for the Standard and $46K for the Advance. This guide demonstrates the key differences between the various levels of the TLX to help buyers decide on the configuration that works best for their needs.

Compare the 2020 Acura TLX Standard vs Technology Trim Levels. What is the difference?

The goal of this model year's TLX is not to outrace its competitors with a high-adrenaline engine. If anything, what it's trying to do is similar to what Honda does on a regular basis -- combine comfort, performance, and convenience with value. Still, what's provided at even the Standard trim is more powerful than regular sedans.

The Standard and Technology trims come with four exterior color options and is offered with three different powertrain options. The least expensive is the inline four-cylinder with Precision All-Wheel Steer (P-AWS). This Acura invention enables the rear tires to independently adjust angles to each other. This helps the vehicle maneuver through tight areas and make smooth lane changes.

There are two six-cylinder engine versions for both trims that come with a higher MSRP. One is with front-wheel drive and the other is with Super Handling-All Wheel Drive (SH-AWD). The latter option combines total torque distribution control to all wheels. This gives the driver more control on various surfaces by tightening or loosening the steering wheel.

While the horsepower on these engines -- 182 hp on the Inline-4 and 267 hp on the V-6 -- won't win any physical races, the fuel economy of the 2020 Acura TLX Standard and Technology trims allows them to rank high on some lists. On average, the four-cylinder gets 23 mpg in the city and 33 mpg on the highway. The rates go down slightly for the standard six-cylinder and V-6 SH-AWD options. In fact, Acura does a good job minimizing the fuel economy loss between the two.

Performance-wise, the Standard and Technology trims don't have any differences. Each is constructed with front struts, rear multi-link suspension, and amplitude reactive dampers to soften the impact of many road conditions. Another spec on both trims is Acura's Electric Power-Assisted Steering (EPS). It detects desired/undesired road feedback and adjusts the steering tension to accommodate.

Comfort and convenience specifications are nearly similar on the two trims. They provide an air-filtrated automatic climate control with humidity reduction, keyless access, and pushbutton ignition. In the Technology trim, owners can link the climate control to their GPS and make calls and change music options through voice recognition.

When it comes to infotainment and other computerized options, the Technology trim of the 2020 Acura TLX has an edge. For instance, while the Standard trim has a seven-speaker audio system, the Technology features a 10-speaker ELS Studio audio setup. As mentioned in comfort and convenience, there's also an option to select a song by Voice. For those who want to pull names from their contact list, the Technology trim has an option for a Bluetooth hands free link.

On the safety side, the Technology trim offers much more than the Standard trim. On the infotainment system, this version of the 2020 Acura TLX comes with a Acura Navigation System with real-time street and freeway conditions and traffic rerouting. It also comes with front and rear parking sensors, blind spot warnings, and rear cross traffic monitor.

Between the two trims, the Technology version is the better option. Although the basic MSRP is $3,000 more than the Standard trim, consumers get more safety and technological base equipment. This is important not only for business people who drive the luxury executive subcompact but also for the families that may join them.

Compare the 2020 Acura TLX Technology vs. A-Spec. What is the difference?

The first difference is the price. Though it offers the same engine and chassis options, the A-Spec averages $2,500 higher in MSRP than the Technology trim. Yet, the options between the two are slight.

What it comes down to is exterior design. Designed for performance, the A-Spec features a decklid spoiler, round dual exhaust outlets, and black window molding. The bumpers and side sill are also modified for a sportier look.

The sportiness is also featured in the A-Spec interior. Available are seats with Alcantara surfaces and 12-way electronic adjustments. Like the Technology trim, the A-Spec driver's seat comes with power lumbar support and thigh extensions for long trips. Additional comfort comes with three-level heat and ventilation in the front seats.

On the design front, the A-Spec's interior contains red accent lighting, red on black gauges, and a black headliner. A metallic footrest pad is available to maintain comfort.

While infotainment options are identical between the two trims, the A-Spec does have additional safety features. The Collision Mitigation Braking System (CMBS) determines distance and closing speed to a detected object. When braking is recommended, it issues an audible alert and displays an orange light on the heads-up display. In addition to this, front and rear parking sensors come with this trim.

In the end, the main difference with the Technology and A-Spec trims on the 2020 Acura TLX is between luxury and sportiness. Feature to feature, the two trims are nearly identical. The only segues are with exterior design and interior accents. Families not interested in red accent lighting and decklid spoilers should stick with the Technology trim and its lower MSRP.

Compare the 2020 Acura TLX A-Spec vs. Advance Trims.  What is the difference?

The Advance trim comes with everything the other three do. Yet, at the same time, it doesn't. For instance, it doesn't enhance the sport features of the A-Spec trim (except for the decklid spoiler). In another example, it only comes with one engine type -- the V-6 SH-AWD. Hence, one of the reasons for the MSRP of approximately $46,000.

In the Advance trim, it comes down to technological difference. For example, it's installed with auto-dimming side mirrors and puddle lights. Inside the cabin, the rear seats also feature three-level heat, as does the leather-wrapped steering wheel. Also available in this trim is a remote engine start that can also heat or cool the cabin.

On the safety front, the Advance trim offers a few additional features. The Surround-View Camera System combines four exterior cameras to give drivers a 360-degree view of the immediate space. It also has an option to switch to a standard rear camera view with overhead 360 or a front view to spot approaching vehicles in a parking lot.

The other option is an automated windshield deicer. In addition to a normal defroster, the deicer minimizes the need to scrape the windshield during cold mornings. Combined with the remote start and cabin warm-up, this is a huge boon in comfort.

Is the Advance trim of the 2020 Acura TLX worth the price? Yes, if the consumer exclusively wants a V-6 engine with AWD. Should the driver want the AWD with a sportier look, then the A-Spec is the way to go.

All of the 2020 Acura TLX trims seem to be quite similar. Other than significant differences in the A-Spec and elimination of the four-cylinder options for the Advance trim, the rest of the features are identical. Yes, there are a few options that are unique to the higher-end trims. However, they don't equal the increase in MSRP.

When deciding on a trim, the A-Spec must be placed on its own. This is the sports/performance version of the luxury subcompact, and it features several exterior and interior items not available on the other trims. It should only be selected by the consumer if that's the type of vehicle they like.

Of the remaining three, the Advance trim is not worth the increased MSRP. Other luxury enterprise subcompacts on the market have more powerful engines and enhanced features than this version of the TLX. Self-dimming side mirrors and a deicer do not constitute a high-end trim.

So, it comes down to the Standard and Technology trims, and it's a tough call between the two. While it's named Standard, the trim comes with a lot of comfort, convenience, and safety features that others in the same price range do not. Consumers may have to look hard to find another luxury subcompact with three engine options -- two of them with an all-wheel drive option. In addition, the safety items that come in the Standard trim are considered options in others.

On the other hand, the Technology differs the most when comparing trims. It's enhancements in convenience and safety are worth more than the $3,000 increase in MSRP over the Standard.

In the end, the Technology trim of the 2020 Acura TLX is the best deal for consumers with the Standard coming in a close second. For the consumer, it is going to come down to what they really need. If a built-in navigation system and GPS-linked comfort controls aren't required, then the Standard trim is going to be the best option. Yet, if the driver wants to get the most bang for their buck, the Technology trim is going to be the best choice.

What it comes down to is seeing a 2020 Acura TLX firsthand instead of from the internet. This is the only way the consumer will get a true feeling for the trim they desire.
Did you find this article useful?
Please rate this page. Select a star rating from 1 to 5 below:

Save Money on a 2020 Acura TLX:
Find New Car Clearance Prices - Many Vehicles are Selling Below Dealer Invoice Prices.

Every dealer offers a secret price. Many prices are below invoice. Find yours here.
2020 Acura Options Packages Guides: