2015 Buick Verano Pros vs Cons. Should You Buy? 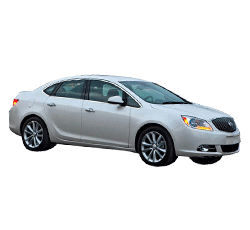 Should You Buy a 2015 Buick Verano? Here Are Some Reasons For and Against

Affordable luxury in a compact sedan is relatively new, and there aren't very many car models that fit this description. Recently, Buick and a few other automakers decided to take the plunge and combine a smaller frame with a long list of amenities. The 2015 Buick Verano doesn't stand completely alone, but its agreeable price tag and choice of optional extras make it worth considering.

While some of the competing models, especially those from foreign automakers, offer a few more technology features and have a more sporty exterior look, there's no denying that the new Verano stacks up well when compared to other domestic models in this segment. Other than the fact that the car is rather small in stature and therefore doesn't promise much in terms of comfort for rear-seat passengers, the general reaction from shoppers is positive. The interior is nicely crafted and contains better-than-average materials, and the ride is very nice indeed.

Virtually the same model as the previous year, Buick has made only a few small adjustments to the exterior look and interior layout. The OnStar® system is now available and places a WiFi hotspot on the vehicle. Multiple devices can be connected which gives passengers a wide range of online connections. The standard features and optional upgrades are essentially the same as last year's offering.

Some compact sedans have a choppy feel to the ride, and the steering can be a bit tight. The 2015 Verano is not only quiet, it responds very well to a slight touch on the steering wheel. Even at highway speeds, the exterior noise is all but blanketed, so there's no need to shout to be heard. The handling is slightly better than average, and there is very little shock when traveling over uneven surfaces.

It would be nice if every American sedan achieved 37 mpg on the highway, but facts are facts. When the added weight of nice materials and a sturdy frame are part of the equation, the result is average fuel consumption. However, Buick has managed to strike a good average indeed, with the automatic transmission Verano capable of going long distances between fill-ups. Highway mileage is about 32 mpg, more than respectable for a luxury compact.

Buick has certainly not spared the expenses when it comes to the vehicle's interior. For the price paid, many would expect cheap plastic and uninspiring, flat-surfaced upholstery, but the Verano surprises by using very sophisticated carpeting and soft-touch interior padding. The contoured panels are visually appealing, and no surface area is wasted.

The touchscreen measures seven inches diagonally, and the text is very easy to read. The large icons can be custom-arranged and are simple to understand. The voice command is quite responsive and is very useful for iPhone addicts. Other than the annoying problem of slow response to touch control, the interface is of very high quality.

All 2015 Buick Verano model trims come with both front and rear side airbags. There are also front-seat knee airbags and side-curtain airbags running the length of the cabin. Anti-lock disc brakes are of course standard, and the vehicle contains the OnStar® system that includes crash response and on-demand roadside assistance. All of the driver alert systems including blind-spot and forward collision warning are standard on all but the base trim.

The Buick Verano achieved a 5-star score on most of the crash tests performed. The best scores were for frontal- and side-impact protection. The model also scored well in the tests performed for whiplash protection and overall seat safety.

The 2015 Buick Verano has very nice shifting with little or no hesitation. The performance is even better when the turbocharged 2L engine is chosen.

Buick decided to eliminate some of the back-seat comfort and spoil the driver and front passenger instead. The Verano has plenty of head and shoulder room, and drivers will be able to get comfortable regardless of their height or bulk.

Considering the luxurious interior and long list of standard features, the starting price of around $24,500 is quite reasonable. The uplevel trims are not as expensive as one might think.

The model offers less space in the rear of the cabin than most other similarly priced compact sedans. The rear portion of the cabin is wide enough, but legroom is very disappointing.

Most upscale sedans have memory functions for the front seats and power reclining seats, but both of these are lacking on the 2015 Buick Verano. The air conditioning system is also missing some customized function settings.

Some people might balk at the average fuel economy, but the big problem with performance is the undersized engine. Buyers will have to pay more for the 250-horsepower turbo version, which fortunately gets much better acceleration.

Cruze, and the similarities are obvious. The Acura ILX is a close competitor, but shoppers soon discover that the Acura doesn't offer as many standard convenience features. The Audi A3 is also similar in design, but it is far more expensive and contains only a few niceties missing from the Verano, namely power seats and a more complex driver information console.

Conclusion
For the price paid, buyers are getting a very well-built machine, one that trades off a flashy exterior for better-than-average performance. So long as the small engine is not a deal-breaker, this model is perfect for those whose prime concerns are a quiet, comfortable ride and a plush interior. Affordability does indeed meet compact luxury, and its name is Verano.