2020 Buick Enclave Pros vs Cons. Should You Buy? 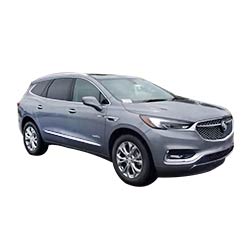 Should You Buy a 2020 Buick Enclave? Here Are Some Reasons For and Against

Despite being a midsize SUV, the 2020 Buick Enclave offers much more than most. Much of this can be seen in the high-quality features that come with the vehicle as standard, which is enhanced through the large selection of optional extras.

With three rows of seats and plenty of space, the Buick Enclave can accommodate up to seven passengers without feeling too cramped. Alongside this are a variety of safety features, with the manufacturer seeming to focus on this area.

There’s also a significant number of infotainment and technology features available, making the 2020 Buick Enclave feel quite high end. All of this can come at a cost, however, as it’s priced similar to a luxury SUV.

To determine whether or not it’s worth the investment, it’s vital to look at the pros and cons of the vehicle. There are quite a few more than you might believe.

The Buick Enclave is one of the few mid-size SUVs to receive a complete redesign in recent years, although the range went through its makeover in 2018. As a result, anybody expecting an overhaul with the 2020 Buick Enclave will be somewhat disappointed.

While there has been a few tweaks and changes in the intervening years, there’s not much of note. Instead, the new edition only has a few performance adjustments, which may be something that many people might want to consider.

There are quite a broad range of features available with the 2020 Buick Enclave, each of which can be beneficial. There are a few highlights that stand out from the others, which should encourage many people to consider the vehicle.

The 2020 Buick Enclave has quite a powerful engine, although that doesn’t mean that it has a rough ride. Instead, the driving experience that’s on offer with the vehicle is much more refined than you might expect, which can be seen in a variety of areas.

Some of the most notable of these are the transmission, gear-shifting, and much more. As a result, the Buick Enclave provides a comfortable and controlled driving experience. This could make it a recommended choice for driving almost anywhere.

The Buick Enclave offers a variety of features that give it the air of luxury. For people who want to maximize this, however, there’s the Avenir Trim. The option adds quite a large number of features, such as a wood-accented steering wheel, as well as leather seating.

The added features aren’t just seen in the interior design, as there are also several safety and technological additions added with the Avenir Trim. Alongside this is an enhanced suspension, which could make drive much smoother.

As a result, the high end trim may be something that many buyers may want to take advantage of.

The 2020 Buick Enclave offers quite a significant variety of connected features for owners to take advantage of. The majority of these focus on sound systems and several infotainment features, which makes using them much easier than before.

Alongside this is the myBuick App, which is available should a buyer choose the Remote Access Plan. By capitalizing on this, owners should be able to take advantage of several features through their smartphone. Some of the most notable of these include a Start/Stop feature, as well as locking and unlocking.

One thing that many people have difficulty with when using an SUV is that they can often be challenging to load and unload. This isn’t the case for the Buick Enclave, as it has a hands-free rear liftgate as standard, which is something that every buyer should be able to make use of.

Alongside this is the option of power-folding rear seats, which can further enhance how easy to load the vehicle is. With these also being hands-free, owners should be able to pack and unpack the SUV relatively quickly and easily.

One of the main drawbacks of every mid-size SUV that has a third row of seats is that there can be little cargo space. However, the Buick Enclave doesn’t seem to suffer from this as much as many competitors.

While buyers mightn’t have as much as they want when the seats are up, it’s more than they might see with other SUVs in the same class. With the second and third-row down, however, you’ll be able to take advantage of much more cargo space than you’ll seen in many other vehicles.

Similar to many other SUVs in its class, the 2020 Enclave offers an optional All-Wheel Drive. However, where this stands out is that the option here is much more intelligent than you might expect. As a result, it can offer a variety of advantages when compared to others.

This is primarily driven by the Buick's Intelligent All-Wheel Drive feature, which senses when the AWD is necessary and activates it accordingly. Should owners not want to take advantage of this, they have the option of switching to full-time FWD.

Despite being a mid-size SUV, the 2020 Buick Enclave offers a much more powerful engine than you might expect. While this typically means that the vehicle will provide a rough drive, this isn’t the case here.

Instead, the engine has been fine-tuned and balanced to ensure that it offers as smooth a drive as possible. As a result, you should be able to expect a decent amount of handling and an about-average fuel economy.

Acceleration is something that the vehicle excels in, with the Enclave placing higher than many of its competitors in 0 to 60 mph.

Safety is something that every SUV looks to shine in, although they do so in various ways. As a result, there’s a significant difference in the features that each vehicle includes as standard.

The Buick Enclave stands out among these, as there’s not only quite a large number of features that come with each model, but also a variety of optional upgrades. If this is something that you’re looking for in a mid-size SUV, then it’s quite a notable benefit.

Safety isn’t the only area where the 2020 Buick Enclave offers a variety of features as standard. In contrast, it also provides quite a significant range of technology features to capitalize on.

While the vehicle does cost quite a large amount of money, these extra features can make it much more cost-effective than you may believe. There are also a few additional extras you can splurge for.

Despite the large engine, the Buick Enclave is a much more comfortable drive than you may expect.  The majority of this is seen in the fact that the handling is relatively smooth, and there are few bumps that the SUV can’t absorb.

Alongside this is quite a large amount of noise reduction, so you shouldn’t have to worry about hearing the engine or the road too much.

Reasons Not to Buy a 2020 Buick Enclave – The Cons

Though there are a few notable reasons to buy the 2020 Buick Enclave, it also offers a few drawbacks. Some of these can be quite major, so they could end up having an impact on any potential buyer’s decision.

Though the 2020 Buick Enclave doesn’t fall into the luxury midsize SUV category, it’s certainly priced like one. As such, it’s one of the more expensive options in its class, which can be off-putting to many potential buyers.

While there is an extensive number of features to take advantage of, these mightn’t justify the cost of the vehicle. This could mean that many people may want to consider a more cost-effective SUV.

While the price is somewhat balanced out at higher trim levels, the large price discrepancy starts from the new Buick Enclave’s base trim.

While the Buick Enclave offers quality in a variety of ways, although this doesn’t seem to be the case with its interior. There is a significant amount of functionality with the SUV, although it doesn’t make it overly comfortable.

Though this wouldn’t be much of an issue with other vehicles, it does offer a jarring contrast when the refinement of the rest of the vehicle is seen. This could make it less friendly to long journeys or off-roading than many people may want.

One of the primary drawbacks of the 2020 Buick Enclave is that it only has one engine option. As a result, buyers will be stuck with many of the limitations and costs of the engine, one of the most notable of these being the fuel economy.

Though many other competitors offer one base engine, these are typically much better performing in this regard, as well as a variety of others. This could be something that the majority of buyers may want to avoid.

The 2020 Buick Enclave stands out as one of the better mid-size SUVs, although that doesn’t mean that it doesn’t have some stiff competition. The majority of this comes from the Honda Pilot and the Toyota Highlander. Though both cost considerably less than the Enclave, they lack a noticeable number of features.

Looking at the same price point, however, would make the Lincoln MKX one of its main competitors. While this offers better standard and optional features, the 2020 Buick Enclave does have more cargo space and enhanced fuel economy.

As a result, while the Enclave can be an expensive choice compared to some luxury SUVs, it can be much more cost-effective than you might realize.

The 2020 Buick Enclave is an excellent installment in the mid-size SUV class, as it offers a significant amount of refinement, especially when it comes to the details. While the engine is quite powerful, it’s not overbearing and doesn’t take too much to handle.

With the comfort and space that it offers, the Buick Enclave could be a recommended option for a family vehicle. This is enhanced further by the various technological and infotainment features that the SUV includes.

Though it may be on the higher end of a buyer’s budget, it can be worth the extra cost when compared to other mid-size SUVs.

Save Money on a 2020 Buick Enclave:
Are you Shopping for a New Vehicle? Find the Best Deals with "Free - No Hassle" Prices Quotes.