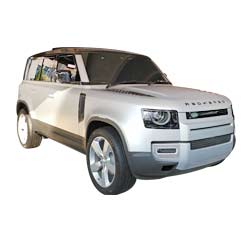 Should You Buy a 2020 Land Rover Defender? Here Are Some Reasons For and Against

The 2020 Land Rover Defender is definitely a unique ride. Using a boxy design for this SUV was a bold move on Land Rover's part, but the benefit of having this frame is that it's unmistakably a vehicle built for rugged terrain. Having been an iconic vehicle that has conquered desert trails and off-road paths around the world, the Defender is now making a comeback stateside. While it has excellent capability, this SUV also comes with a nicely appointed interior and many modern amenities.

After having stopped production for several years, Land Rover is introducing the market to the all-new Defender. (Previous generations of the Defender were available to people overseas, and any of these vehicles that one might have seen in the US had to have been shipped over.) The 2020 Land Rover Defender is a modern vehicle with many features, making it ideal both in urban environments and in the back country.

One of the main ways in which it differs from the Defender of years past is that it has unibody architecture. This makes the vehicle lighter, safer, and more agile than it would be if it had a body-on-frame design, as previous models had.

All models of the new Defender come equipped with all-wheel drive and locking differentials. This gives drivers the traction they need to make their way more safely through difficult conditions. The advanced systems on the Defender have been finely tuned to be able to handle rocks, snow, mud, and more. Plus, the SUV has adaptive damping, which lets its suspension make the necessary adjustments to smooth out the ride.

The way the Land Rover Defender has been built can be used to the benefit of drivers. It has an approach angle of 38 degrees, a breakover angle that can be up to 29 degrees, and a 40-degree departure angle. This all means that the vehicle can hold its own even if the terrain is uneven.

With high ground clearance, the SUV can confidently go into a variety of places. It can wade at depths of up to 35.4 inches, making it possible to cross water to get to a desired destination. Using the Terrain Response program, the SUV can actually raise itself up a few inches when fording a stream or creek.

When properly equipped, the 2020 Land Rover Defender can tow up to 8,201 pounds. This rivals many trucks and full-size SUVs, and it's an impressive capability for a vehicle that isn't super bulky. With the Advanced Tow Assist feature, steering while in reverse will be much easier.

The Defender doesn't simply have a winch built into it; it has a remote-control electric winch that can be conveniently controlled from wherever one may be, up to almost 150 feet away. The winch has a maximum pulling force of 10,000 pounds, so people will be able to get themselves or their buddies out of tricky spots.

With the Land Rover Defender, consumers will get to choose whether they prefer a 2.0-liter, four-cylinder turbocharged engine or a mild hybrid system. The 2L component provides 296 horsepower and 295 pound-feet of torque, and the alternative set-up can generate 395 horsepower and 406 pound-feet of torque. Giving the engine all of this power are an electric motor and a turbocharged gas engine with six cylinders and a displacement of three liters.

When looking at the Defender and the various trims, people will see the terms "P300" and "P400" commonly used. P300 refers to the 2.0-liter engine, and P400 is used to describe the hybrid engine.

In the dash of the 2020 Land Rover Defender, there is a ten-inch touchscreen. Land Rover has decided to go with the Pivi Pro interface, which is user-friendly and simple to understand. The infotainment system includes wireless charging, Apple CarPlay, and Android Auto, as well as the capability to act as a Wi-Fi hotspot. What's even better is that navigation, which can take traffic into account, is standard. Adventure-minded drivers who are often traveling to new places will really appreciate this feature.

The base model has six speakers. While they do the job pretty well, there's the option to upgrade to a 10- or 14-speaker Meridian stereo system if anyone prefers to have a premium listening experience.

7. Keeping an Eye on Everything

With the Land Rover Defender, drivers will have the opportunity to see all around their vehicles. The 3D Surround Camera can be used when parking or maneuvering in tight spaces, and it can really reduce the likelihood of getting scratches and dents. Further, ClearSight Ground View technology can come in handy when people want to see what's directly beneath them. The camera gives drivers a view through their hoods, so they can be aware of rocks, potholes, or other types of obstacles.

ClearSight is also used in the rear-view mirror. The mirror can be used as a traditional mirror, or it can display a live video feed of what's behind the Defender while it's in reverse. This alleviates the need to keep looking up and down between the mirror and the screen when trying to reverse safely.

Anyone who gets a Land Rover Defender will have the chance to get an Activity Key. This is worn on the wrist like a smartwatch, and it can take the place of a traditional key. This system is designed for people who are active and don't want to be burdened by carrying a key in their pocket; it can also be useful for people who are a little forgetful. When people place the Activity Key next to the door, the handles can lock and unlock, and the presence of the Activity Key can also allow the push-button start to engage.

This list of the Defender's advantages has mainly focused on its capability and durability so far, but it's important to remember that Land Rover is a luxury brand. With the Defender, the company didn't leave out too many details. Premium cabin lighting can be configured with 10 different options, the seats can be heated and cooled to make things more comfortable, and the seats can be trimmed with Windsor leather. Whether one gets the premium trim, a base model, or something in the middle, there will be no doubt that the SUV has been built with sophistication in mind.

There are many ways that the Land Rover Defender can be configured. The traditional layout offers five seats, and this layout gives people plenty of cargo room in the back. For those times when more gear or larger items need to be transported, those rear seats can be folded down to expand cargo capacity. This seems par for the course when it comes to SUVs.

Where the Defender stands apart from many others is in its alternative seating options. With some trims, the center console can be flipped up to create a jump seat. Having room for a sixth person can be key for some people, eliminating the need to take two cars on trips. Something else to consider is getting two extra seats in the back. The Defender can come with an optional third row, making it more appealing to people with a lot of passengers to carry.

Reasons Not to Buy a 2020 Land Rover Defender – The Cons

The Land Rover Defender can be customized in so many ways. There are four available accessory packages, and other attachments and components can be added on. People with specific things in mind, such as driving into the backcountry or going on ski trips every weekend in the winter, might want to personalize their vehicles. However, they should be ready to fork over a significant amount of money for this.

The initial price point of the Defender is around $50,000, and the highest trim comes in at around $82,000. These are just the starting points, and anything extra will drive the total price up.

2. Base Engine Could Be More Exciting

The enhanced engine on the Defender can make any drive fun, but the standard engine doesn't quite compare. On the lower trims, it would have been nice if Land Rover put in a V6 or anything with a little more pep.

3. A Full Cabin Can Feel Cramped

As previously mentioned, there are various seating configurations of the Land Rover Defender. It needs to be mentioned that people might feel a little crowded if the cabin is full of passengers. This would especially be the case in the third row, which seems to have been designed more for children than adults.

How it Stacks Up to the Competition:

The Jeep Wrangler is another highly capable SUV with the same rugged sensibility as displayed in the Defender. While the Wrangler has good ground clearance and the ability to wade through water, the Defender beats it in these areas. The Mercedes-Benz G-Wagen is another competitor in this niche market. The major drawback of the G-Wagen is its six-figure starting price. Being so expensive makes it not practical for most customers.

Land Rover has done the market a favor by bringing back the Defender, and it's great that this model is now offered in the US. It will attract anyone who has a taste for adventure and wants a capable vehicle that will be a little different than the standard SUV seen everywhere. The Defender isn't a vehicle designed for people who mostly hang out in the suburbs and cities; it's for people who need something rugged, powerful, and durable. People who can afford such a quality SUV will be in for a treat with the 2020 Land Rover Defender.


Did you find this article useful?
Please rate this page. Select a star rating from 1 to 5 below:

Save Money on a 2020 Land Rover Defender:
Find New Car Clearance Prices - Many Vehicles are Selling Below Dealer Invoice Prices.

Every dealer offers a secret price. Many prices are below invoice. Find yours here.
2020 Land Rover Buying Guides: