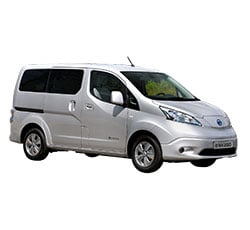 Should You Buy a 2018 Nissan NV200? Here Are Some Reasons For and Against

The Nissan NV200 is a light cargo van built as a complement to Nissan’s larger NV full-size van starting in 2010. In the very price-sensitive field of commercial and small-business vans, it is one of the most inexpensive options available. Other than an attractive price, tradesmen, small business owners and regular buyers alike will also appreciate the excellent degree of customizability and the low cost of ownership that the 2018 Nissan NV200 brings.

For 2018, Nissan has updated the complement of onboard electronics for the van. The 2018 Nissan NV200 now comes standard with a rearview camera, a 5.0-inch LCD display and Bluetooth voice and hands-free texting functions. Aside from its feature selection, the Nissan NV200 remains unchanged since its 2010 model year debut.

The biggest selling point of the 2018 Nissan NV200 is that it is by far the cheapest option for a cargo van on the market today. At around the same price point as a compact passenger car or crossover SUV, it delivers a lot more cargo room and hauling ability. It is also priced well below most of its competitors in the light cargo van segment, making it a good value purchase.

Vans are not designed to be appealing, but the 2018 Nissan NV200 manages to avoid looking boxy or ugly, thanks to its rounded lines and subtle accents integrated into its cargo cab. Likewise, its interior feels more car-like than some competitors when you are in the driver’s seat.

The addition of standard Bluetooth and rearview camera to the 2018 Nissan NV200 gives it additional value as both a private and a commercial vehicle. While those are common on many consumer cars, they are high-end options on many commercial vehicle. For a van, a rearview camera is almost a must, and Bluetooth makes it easier to safely conduct business while on the go, so this is a big plus for the NV200.

While it is large to accommodate a big cargo load, the 2018 Nissan NV200 is not actually much longer than most mid-size consumer vehicles, which makes maneuvering it around city streets or through built-up neighborhoods much easier than a standard van. The standard rearview camera makes it even easier when it comes to reversing.

Nissan has made it very easy to customize this van and adapt it to your changing business needs. Inside the cargo compartment of the 2018 Nissan NV200, you will find 20 wall-mounted and six optional floor-mounted cargo points, which allow you to attach shelves, storage lockers or equipment to the walls without welding or drilling. This makes adding, removing or rearranging your storage very easy.

Another optional customization feature offered on the 2018 Nissan NV200 is its optional sliding door. Models with that option have a minivan-style door on the passenger side that allows easy access to the cargo area without having to use the rear doors. For many business applications, such as residential deliveries, this can greatly speed up the process and make it more efficient.

The front cabin of the 2018 Nissan NV200 is filled with little touches designed to make it easier to keep your business workflow going even while in transit. There is storage for files and laptops in the center console and dashboard, helping important items not get lost, but the most innovative is the folding passenger seat. It can be folded down to create a small desk, which can make it easier to work on the aforementioned laptop or files while remaining in the driver’s seat.

For the 2014 model year, Nissan introduced a new version of the NV200 specifically for use as a New York City taxi, before expanding the availability of the model to other markets. This model is filled to the brim with excellent comfort touches, including vinyl upholstery, full windows and a complement of nice features for the passengers, including a panoramic sunroof and USB ports and even a power outlet.

The Nissan NV200 does slightly better than its van rivals when it comes to keeping fuel costs down. It is rated at 24 miles per gallon city, 26 mpg highway and 25 mpg combined, which puts it at above average for the class.

Nissan offers a great warranty on its commercial vehicles, which includes the NV200. Its new car warranty lasts for five years or 100,000 miles, which is longer than most other manufacturers. This is good news for both larger fleet buyers, who are more likely to see defects, and small businesses, which may be running on lower margins.

With only 131 horsepower on tap, the Nissan NV200 is the weakest of the small cargo vans available on the market today. It can feel a little slow even when lightly loaded, and downright sluggish when pushed to its limits.

Some competitors of the NV200, as well as some consumer vehicle alternatives for moving small cargoes, also have the ability to tow a small trailer, which the NV200 lacks. This makes the NV200 less versatile than some other options.

Even disregarding its slow powertrain, the Nissan NV200 feels like a chore to drive. The steering lacks feedback and there is a lot of body roll through turns, due to its height. Many rival vans are easier and more fun to drive.

The competition to the Nissan NV200 consists of other small cargo vans, such as the Ford Transit Connect or the Mercedes-Benz Metris. The Ford Transit Connect is more car-like in its styling and handling than the NV200, but offers a lower payload for a higher price and less utility. The Metris is an excellent vehicle, featuring both good driving dynamics and utility, but it is much more expensive than either alternative, making it less of a value for the money.

The 2018 Nissan NV200 is a vehicle focused on one thing: providing an excellent value when it comes to carrying cargo and the various business applications that accompany that. It is inexpensive and easily tailored to the needs of each particular business. It is not as flashy as some alternatives, but it delivers good and consistent value which will be reflected in your bottom line at the end of the day. That makes it an excellent choice.

Save Money on a 2018 Nissan NV200:
Are you Shopping for a New Vehicle? Find the Best Deals with "Free - No Hassle" Prices Quotes.