2019 Nissan NV Cargo Pros vs Cons. Should You Buy? 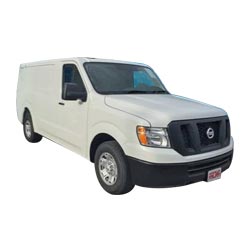 Should You Buy a 2019 Nissan NV Cargo? Here Are Some Reasons For and Against

If you are in the market for a new cargo van to add to your fleet, the 2019 Nissan NV Cargo has probably caught your eye - and for good reason. With a couple of strong engine options to choose from and a straightforward design with plenty of space, it is hard to deny the utility that the NV Cargo possesses. But is it really the best choice among its class this model year? Let's find out.

New for the model year, the 2019 Nissan NV Cargo now has an expanded optional Backdoor Glass Package. This package can now be equipped on the S and SV8 models.

The 2019 Nissan NV Cargo van comes with an extremely generous warranty. In fact, it's the best you can get for this class. You get a bumper-to-bumper limited warranty for five years or 100,000 miles. Most vehicles in this segment offer a shorter term for this type of warranty. For the price you pay for the van itself, the warranty makes it all the more attractive.

Of course, the NV Cargo has a lot of utility. As a cargo van, utility is a 'must'. But Nissan goes above and beyond to expand the NV's utility as much as possible. The layout of the cargo area makes it easy to fit a couple of pallets or pieces of drywall back there, and the sidewalls can be used to house aftermarket storage set-ups without you needing to make a ton of alterations to accommodate them. The High Roof is helpful since it leaves room for taller adults to walk around in the cargo area.

3. A Good Line-Up of Configurations

The 2019 Nissan NV Cargo van gives you a good number of options for how you want to configure your vehicle. There are three different models: the NV1500, NV2500 HD, and NV3500 HD. On any of these trims, you can choose to get the Standard or High Roof. Also, there are two engine options to choose from, and either one is a great option.

Speaking of the Nissan NV Cargo van's engines, we think they deserve their very own slot on this list. There is a 4.0-L V6 and a 5.6-L V8 that you can select from, and either one provides a great amount of power. The V6 generates 261 hp and 281 lb-ft of torque while the V8 is able to produce 375 hp and 387 lb-ft of torque. Of course, there is quite a price difference between these two engines, so if you want the extra power, be prepared to pay more. But the V8 is worth it.

5. Nissan Connect is Available and User-Friendly

You can get the Nissan Connect infotainment system on the 2019 Nissan NV Cargo van. This system includes communication, navigation, and audio features that can be accessed via the 5.8-inch touchscreen display panel or through your smartphone. Pandora, iHeartRadio, Apple CarPlay, Android Auto, Google Search, SiriusXM, Journey Planner, Facebook, and Bluetooth are just some of the features that are included in this infotainment system. The display itself is easy to read, and there is just a small learning curve that comes with it.

There are two trim level choices that come with the NV Cargo van's configuration: the S, SV, and SL. With the S on the 1500, you get power doors and mirrors, cruise control, remote keyless entry, a rear-view camera, and a tilt-only steering column. It places the NV Cargo atop 17-inch wheels and includes a two-speaker sound system. The 2500 S adds more cargo lights, storage bins, and two household power outlets. The 1500 SV gives you the added benefit of parking sensors on the rear of the van and two more speakers for the audio system. The SL trim, which isn't available on the 1500, comes with chrome wheels and exterior trim. If you get the V8 with either the SV or SL, you get a trailer brake controller, Class IV trailer hitch pre-wiring, and two front towing hooks.

Although this is purely optional, adding the Backdoor Glass Package is something a lot of drivers will want to do on the 2019 Nissan NV Cargo van. This gives you a rearview mirror and defroster for the rear windows. This is especially nice to have if you plan on driving during cold, inclement weather.

8. A Smooth and Quiet Ride Quality

Despite the fact that the NV Cargo is a big van, it handles extremely well in most conditions. It does not feel as bulky as it looks. You also will not hear much in the way of engine, road, or wind noise since the cabin is well-insulated. And, with the engine being pushed so far forward, you will have plenty of room up front to stretch out your legs and get comfortable.

Work vans are not necessarily known for having the most comfortable seats. However, the 2019 Nissan NV Cargo van is given some well-bolstered seats. Also, if you get the SL trim on the 2500 or 3500, you get to enjoy the benefit of having an eight-way power-adjustable driver seat.

If you need it to, the NV Cargo van is a capable tower. The 1500 with a V6 engine is able to tow 6,900 pounds and can handle a payload capacity of 2,700 pounds. Of course, you can go even higher with the V8-powered 2500, as that has a tow rating of 9,400 pounds and payload capacity over 3,800 pounds.
Buying Tip: To avoid overpaying on a new car, shop prices online first. Get up front pricing before you walk into a dealership. We recommend the following free services; Car Clearance Deals, NADAguides, CarsDirect & Motortrend.
These free services will offer you the lowest prices and supply you with multiple competing price quotes. You will know the best price before you visit the dealer.

While they are definitely powerful, both the V6 and V8 engine options do not give the 2019 Nissan NV Cargo van very good gas mileage. Sure, vans in this class are not exactly known for being fuel efficient, but the NV Cargo is one of the worst-rated. If you are looking for something more fuel efficient, you will have to check out some of the NV Cargo's competitors.

As is the case with most vehicles in this class, the materials used in the NV Cargo's cabin design are not exactly high-quality. There are a lot of hard surfaces and obvious plastic parts. That being said, the interior doesn't look tacky, so the quality is at least somewhat forgivable.

While the 2019 Nissan NV Cargo van offers a modest and well-designed series of body style choices, most of its competitors boast longer lists of configurations. If you really want to get down to the nitty-gritty with customizing the NV Cargo, you will be kind of limited.

4. Not As Stylish As Some Competitors

On the outside, the NV Cargo van probably looks like just about any old cargo van. There are not too many distinguishing features, and the van is losing its contemporary flair to the style updates found on some of its competitors.

The 2019 Nissan NV Cargo van faces stiff competition in the form of the 2019 Ram Promaster Cargo van. This van comes with a standard rearview mirror and 5-inch touchscreen, and it has an on-board Internet connection to suit your business needs. There are also a bunch of body styles to choose from. However, the Promaster lacks the NV Cargo's refined ride quality, and it is downright impossible to find the perfect driving position.

The 2019 Ford Transit is another major rival for the NV Cargo this model year. It comes with the ever-superb Sync 3 infotainment system, which is known for being one of the most user-friendly set-ups out there. The Transit also has several strong engine choices. On the negative side, though, the Transit doesn't have a very good towing capacity, and it is pricier than the NV Cargo.

While the 2019 Nissan NV Cargo van might not be your first choice, it should be on your list of cargo vans to test drive. It could use a few updates to make the interior look less cheap, and the engines aren't the most fuel efficient ones in this class. With that being said, the NV Cargo is a capable tower and hauler, and with a well-designed cargo area, it can get almost any job done.

Save Money on a 2019 Nissan NV Cargo:
Are you Shopping for a New Vehicle? Find the Best Deals with "Free - No Hassle" Prices Quotes.